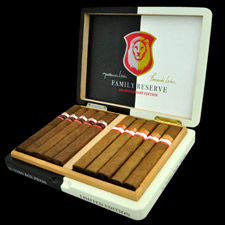 This year’s IPCPR trade show is featuring a limited-edition set of smokes—the León Family Reserve. The special box set will consist of 16 cigars, eight each of the Guillermo León and Fernando León blends. What makes them special? Both are box-pressed, which is a first for La Aurora.

All sixteen box-pressed cigars measure 6 inches by 54 ring. La Aurora says that they’ve been toying with the idea of a box-pressed cigar for some time, but this was the first opportunity that presented itself.

The release is limited to 1,000 boxes. The two cigars will come packaged in a two-toned, black-and-white box, one brand on one side, one brand on the other.

The Guillermo León cigar is made in the Dominican Republic from a six-nation tobacco blend. The wrapper is Ecuadoran Habano, the binders are Cameroon and Dominican, and the filler blend consists of Peruvian, Dominican, Brazilian and Nicaraguan tobaccos.

Fernando León was launched this past winter. It contains a Dominican Corojo wrapper and binder, with a filler blend of tobaccos from Peru, the Dominican Republic and Brazil. Each box-pressed cigar will retail for $10.25 each.