"Just in terms of flavor this was actually a very good cigar. The smoke output was creamy, the draw was nice if I held it just right, and it burned well even with an almost destroyed wrapper. The size was very large though and with the lack of profile changes did make it a bit one dimensional." -Alan (Eulogy) Read More
90%
Very Good

"This cigar had some fantastic flavor to start off. From the looks of this dark wrapper I was expecting some good dark earthy flavors. That is exactly what I was getting. Molasses, spice and wood notes mixed in made this very enjoyable. With that being said, right around the half way point it took a turn in the less enjoyably direction. The cigar was burning hot turning most of the flavor to char. Had to take more time in between puffs to lessen that. Although it eventually subsided the damage I think was done and just mushed all the flavors together to get a mostly musty earth. Not how I would have liked it to end." -Jake P. (Jake P.) Read More 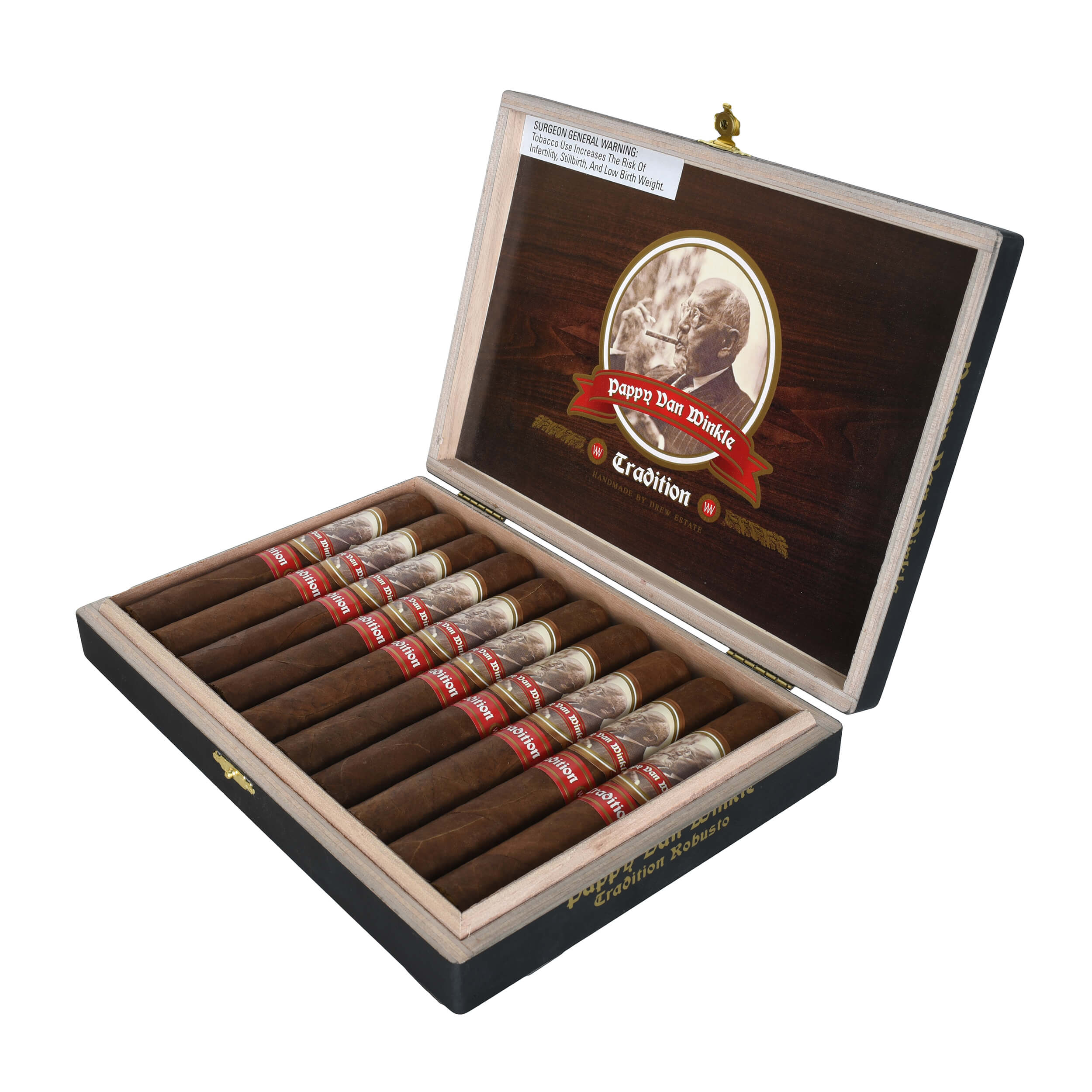 Drew Estate announced today that its line Pappy Van Winkle “Tradition” would now be distributed exclusively by Pappy & Co. at www.pappyco.com. Previously, the cigar had been available at Drew Diplomat retailers in 5 vitolas, now there will only be two: Robusto Grande (5.5 x 54) MSRP $140.00 per box, and Toro (6 x 50) MSRP $150.00 per box. Both come in boxes of 10. Pricing for those two sizes is significantly less than before with the Robusto Grande previously selling for $216, and the Toro selling for $236. Read More
92%
Overall Score - Great

"This was a good looking and good tasting cigar for me. It met all three areas of “like” and the only down side was the little bit of tightness in the draw. I would love to smoke this again and again." -Diana (ArmyRN) Read More
90%
Very Good

"This was a wonderful experience. The flavors were nice and constant and never strayed in to bitterness and yuck. The cedar flavor was there from begging to end. The best part was the slightly sweet taste left on the palate. The aroma was that of a cedar log burning in the fireplace that made this one even more enjoyable. Definitely one for the humidor. " -Eric (smalls29) Read More
89%
Overall Score - Good

"Featuring very little in the way of complexity and with only some minor transitions throughout the smoking experience, I won’t go so far as to say this is a boring cigar. Rather this was a fine cigar featuring fine flavors and fine construction. That’s it, it was just “fine” all around. " -Matt Cade (CADE) Read More
93%
Great

"I was leery about the first third, hoping it may have some complexity of this blend, however i was delightfully surprised bu the last two thirds. A menagerie of roasted and tasty charred flavors intermingling with sweet caramel and chocolate flavors made this end up being two thumbs up for me! Paired with flawless appearance, construction and burn made it all the better. Top notch med-full bodied smoke!" -John A. (Bostoneo) Read More
91%
Very Good

"I really enjoyed this compact cigar. It had a great construction and build and felt really smooth. The profile was complex and had a nice balance of cedar, hay, and pepper. Not too spicy or bold, just a real smooth rich profile. My only negative is that this cigar didn't last longer. " -Steve (ThaGreatWazoo) Read More
92%
Very Good

"Great good stuff here. I wanted a bit more power early on, and it finally delivered in the finale. Super chocolaty in the early going, developing to a nice rich espresso finish at the end. If there was any problem here it's that it was maybe just a little too polite to start. I'd still be happy to smoke a ton more. " -John I. (John I.) Read More 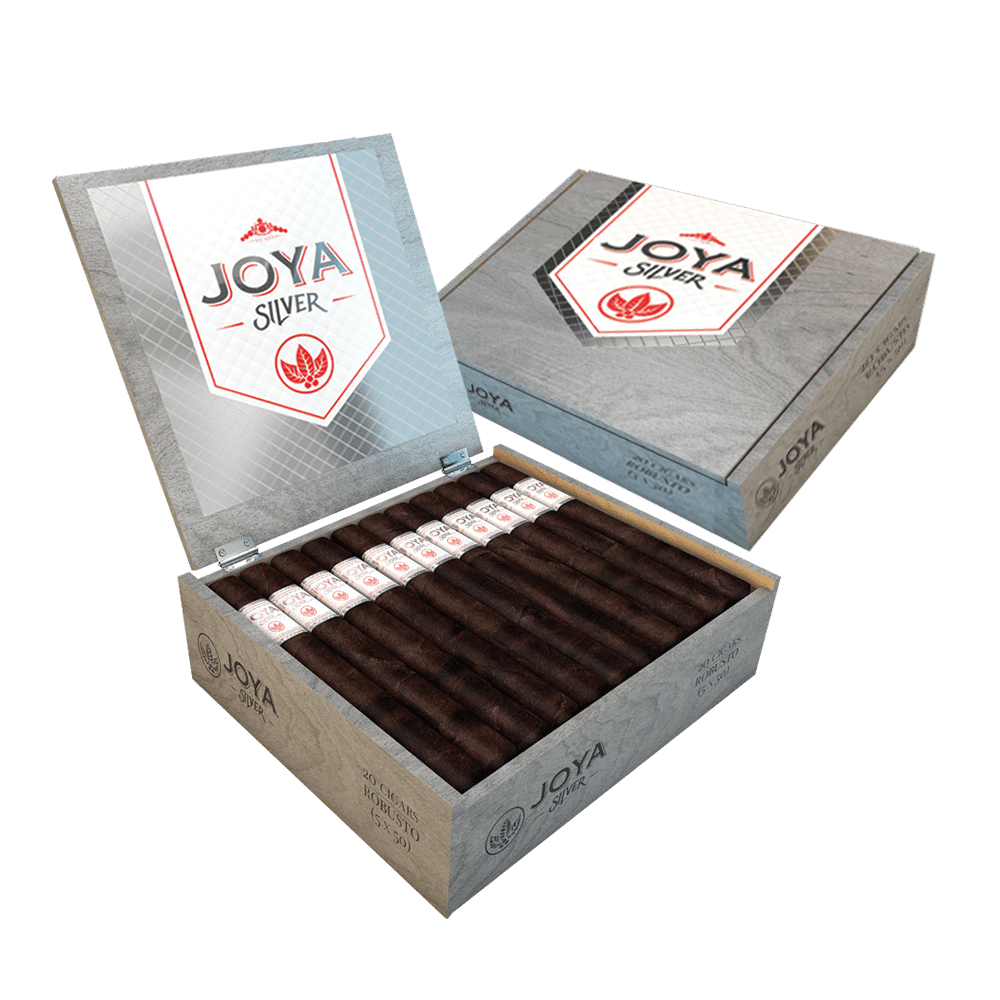 Joya de Nicaragua will expand their modern Joya cigar lineup at the upcoming 2018 IPCPR trade show.  The new addition is called Joya Silver, and it will join Joya Red, Joya Black, and Joya Cabinetta in the line.  It is the first box pressed entry in this line, and features a wrapper that Joya de Nicaragua classifies as an Oscuro upper-priming wrapper grown in Ecuador.  It rounds out with a binder from Mexico and filler leaves from Nicaragua. Read More
Load More