Drew Estate came out with the Liga Privada Unico Year of the Rat back in 2016 as a cigar lounge exclusive. Earlier this year, the company announced that they would be expanding that cigar to Drew Diplomat Events to coincide with the Chinese New Year and it was shown off at the TPE trade show 2020.

Liga Privada Unico Year of the Rat come in one vitola, a 5 ½” x 46 corona gorda featuring a fan tail. The blend features a Connecticut Broadleaf wrapper, Brazilian binder, and Nicaraguan and Honduran fillers. Each cigar is wrapped in gold foil and those come in a wooden box with embossed blue Liga Privada Unico lining. Year of the Rat is only available for purchase at Drew Diplomat Retail events, which are now virtual due to COVID-19. Each event is limited to 4 boxes at most. The cigar comes in boxes of 10 cigars and sell for $159.97. 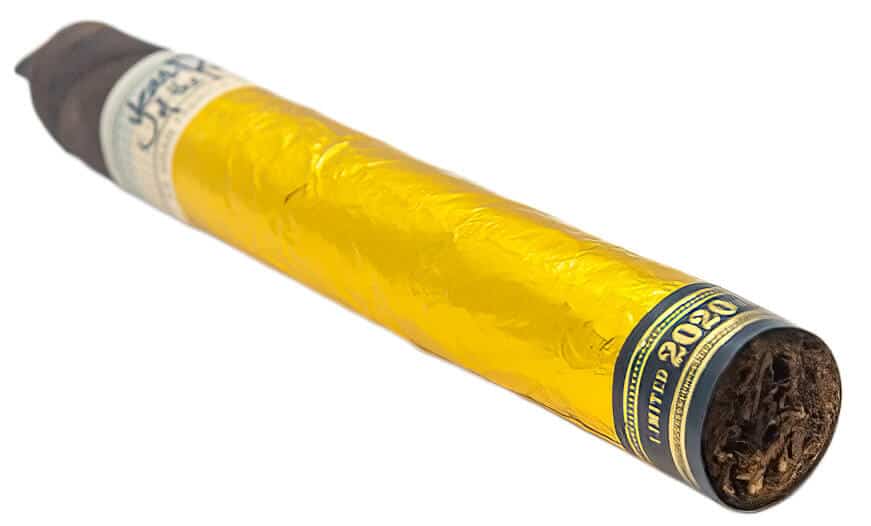 “The wrapper has a fudge brownie look to it. There’s quite a few veins running the length of the wrapper and one that is rather gnarly to the touch. Still, it is pleasing to the eye. I like the mohawk shaped cap that’s ridged to the touch and the seams are very tight. ” –Alan (Eulogy)

“The aroma coming from the foot of this cigar is very good. There is a sweetness that is similar to Nutella, cocoa powder, and a little bit of anise. This all has an underlying earthiness to it. It is very intriguing and has the mouth watering already before the pre-light draw. The pre-light draw gives off even more sweetness, with a good balance of sweet tobacco, cocoa, and coffee.” –Kevin A. (Kevin A.) 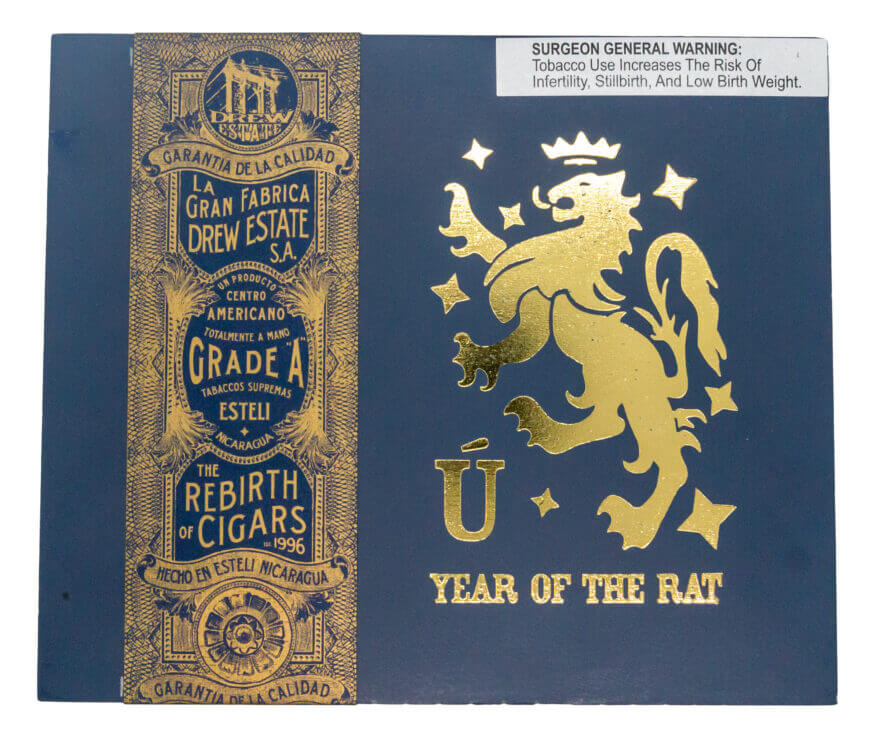 “After toasting the foot completely, the first few puffs were definitely in my wheelhouse. Dark dark chocolate and roasted coffee mixed in with that damp earth to let me know this sucker has some kick to it. A slight bitterness was also there but luckily it went away fairly quickly . Great even burn. This thing smokes like a freight train. An over abundance of thick creamy smoke. Really digging it thus far. Let’s see what else this thing holds in store.” –Kevin J. (maninblack77)

“Black pepper on the nose and deep notes of dark chocolate and espresso on the draw are the first impressions upon torching the Year… the blind #1025 cigar. Thick white smoke pours from the foot and travels seductively up the body of the cigar, producing a solid white ash. There is also a bold earthiness present that melds expertly with the other flavors present.” –Matt Cade (CADE)

“The ash has split in half down the middle like a hungry alligator’s mouth but in no way has that hindered the smoking experience whatsoever. Construction has been fantastic with a smooth effortless draw and a straight burn line. Those core flavors of coffee, chocolate, and earth remain steadfast throughout the second third with the potent nose spice on the retrohale never wavering. The ash drops right at the halfway point just as the peppery spice increases on the nose…” –Matt Cade (CADE)

“The draw has reach an almost perfect level and the smoke output is reaching dumpster fire status. I’m finally getting a some baking spice and a touch of heat to liven up the experience. There’s a bit of char, clove, leather, grain, and black coffee on the luxurious draw. The smoke is so thick it’s almost a marshmallow feeling on the palate.” –Alan (Eulogy)

“As this cigar wraps up, the sweetness has faded almost completely into the background, with the earthy, peppery spicy note beginning to dominate. The creaminess of the blend has not left, and keeps everything smooth. With the amount of pepper this cigar is now putting out, there is no harshness to it at all. The blenders did a great job keeping the power in the profile while keeping the cigar pleasant to smoke and enjoyable!” –Kevin A. (Kevin A.)

“As we head into the final third, I’m still getting the same earth and dark coffee/chocolate notes as the previous third. That bitterness returned for a few puffs but didn’t linger thankfully. The amount of smoke output definitely did a great job keeping the bugs away from me. The cigar finished strong. Each of the flavors were just what I expected from such a dark and decadent cigar.” –Kevin J. (maninblack77) 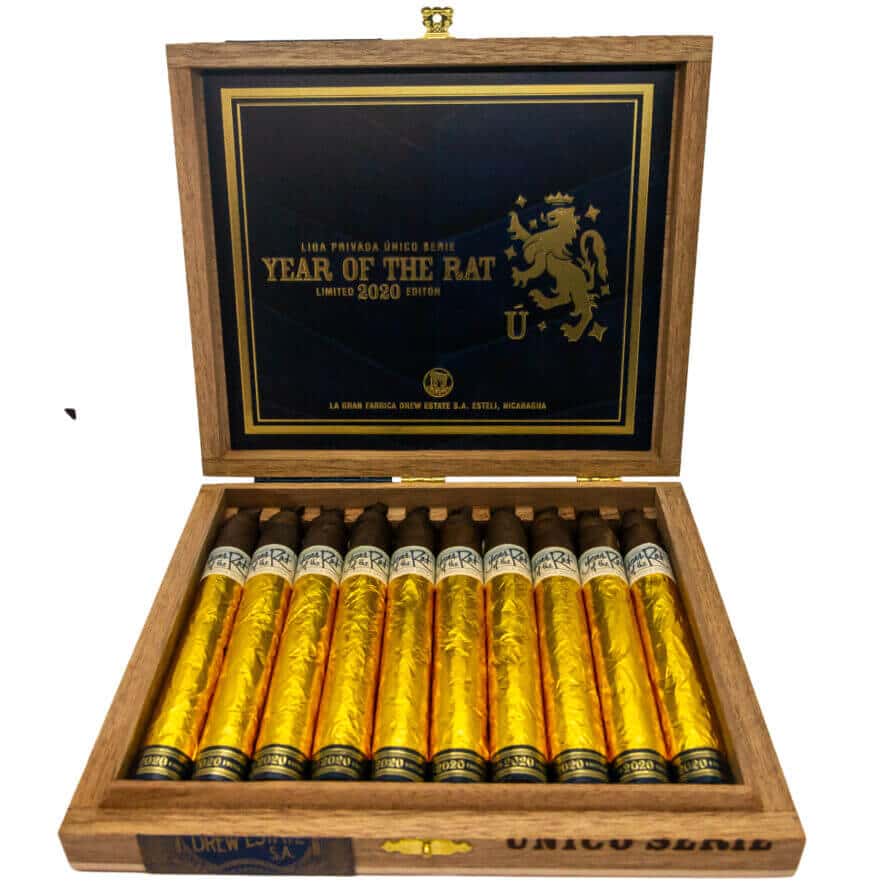 “An excellent draw throughout the smoking experience which is so damn impressive when you consider that the cap was twisted off by hand without the aid of a cutter.” –Matt Cade (CADE)

“This cigar burned like a champ. With the looser draw and the small ring gauge, I was worried that the cigar would heat up. It never did and burned straight and true.” –Kevin A. (Kevin A.) 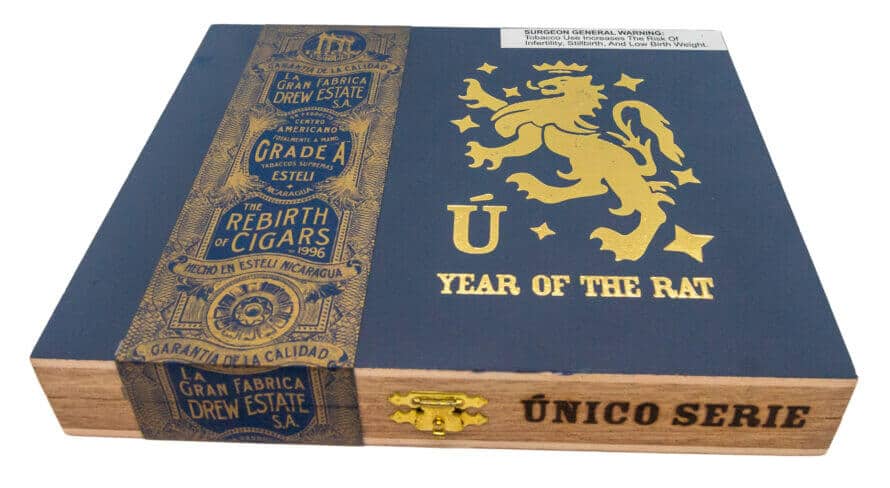 “I enjoyed this a lot more than some of the ratings might suggest. The profile kept changing just enough to keep me engaged and the smoke output was amazing. There’s not a lot of cigars that have a marshmallow mouth feel going for it. Something worth trying for the nonstandard flavor profile and wow factor of the appearance.” –Alan (Eulogy)

“Never judge a wrapper by its color. I was expecting an extremely harsh taste. I was surprised that it was a medium to mild taste. Notes of leather throughout with a nice mix of earth, cherry, and chocolate. Grab a few for your humidor.” –Sean F. (fullermaine)

“There’s a very good reason that I easily recognized tonight’s cigar well beyond its fish tail cap – I’ve smoked a ton of these beauties and I know them well. While highly limited, I hope all of you out there get to experience it sooner rather than later because it’s one of the finest cigars currently being made. And, if it in fact is NOT the Year Of The Rat, I will happily stick my rat tail between my legs and buy a box of whatever these wonderful cigars are…” –Matt Cade (CADE)

“This is definitely a cigar I will want to have in the humidor! A perfect balance of sweet and savory! The smoking time is really good for such a small ring gauge, which is a good thing, as it really enhances the enjoyment.” –Kevin A. (Kevin A.)

“As noted in my tasting notes, each flavor was just as I expected . Dark chocolate and coffee with a slight earthiness all creating a notable smoking experience . I’d easily give this an ‘Excellent’. Great cigar that is box worthy for sure.” –Kevin J. (maninblack77)

Blind Cigar Review: Drew Estate | Liga Privada Unico Serie Year of the Rat
Summary
"As noted in my tasting notes, each flavor was just as I expected . Dark chocolate and coffee with a slight earthiness all creating a notable smoking experience . I'd easily give this a 95. Great cigar that is box worthy for sure. " -Kevin J. (maninblack77)
Appearance
93
Aroma
94
First Third
94
Second Third
94
Final Third
94
Draw
97
Burn
98
Construction
95
Overall Experience
96
95
Excellent