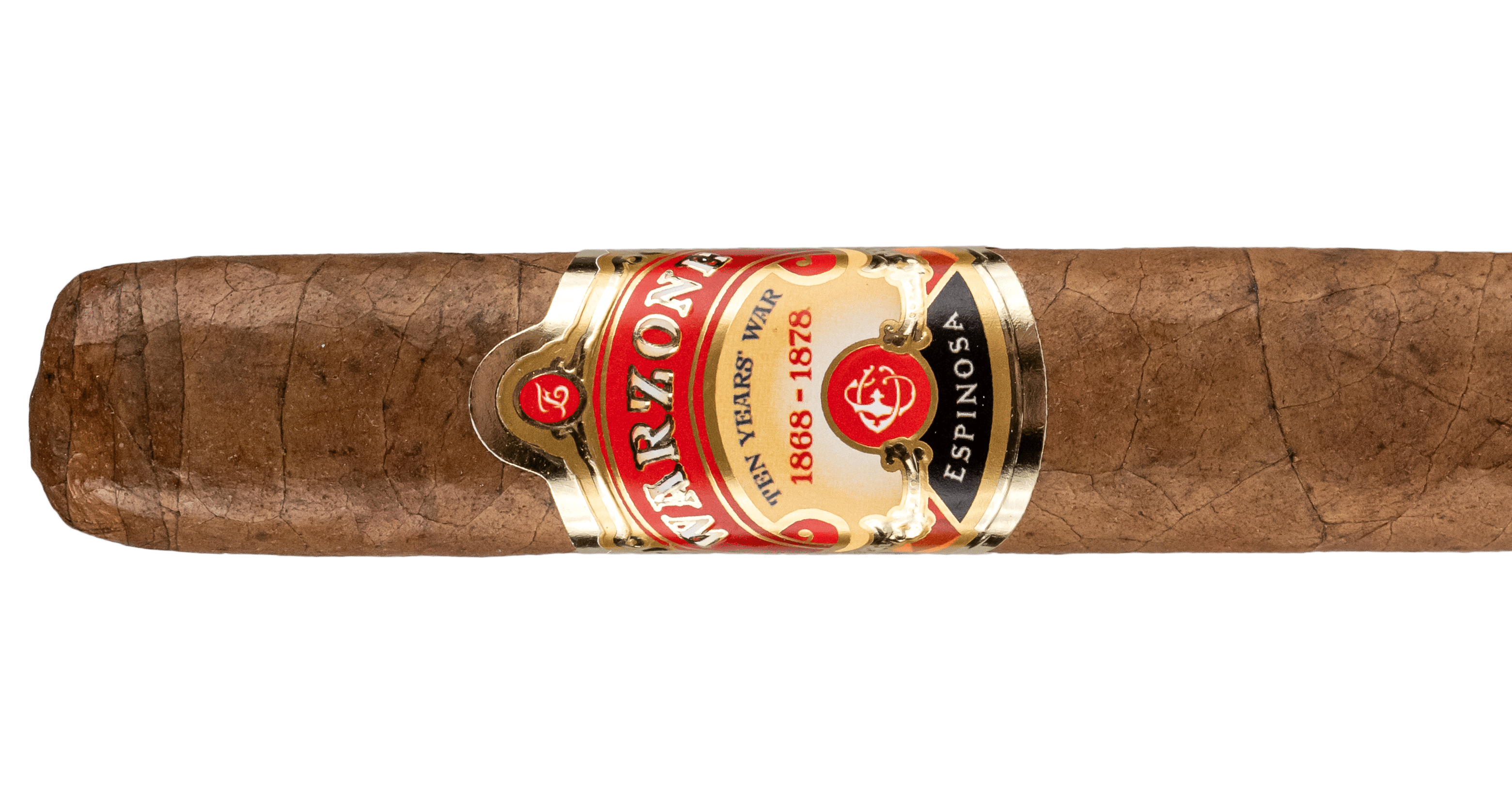 In late 2019 Espinosa Premium Cigars collaborated with General Cigar Co. on a new cigar: Espinosa Warzone. This was the first time the companies had worked together with General Cigar supplying Erik Espinosa with a Cameroon wrapper, which Erik had never used before.

Warzone is a limited edition cigar that uses a Cameroon wrapper from General Cigar, Honduran binder, and Colombia and Nicaragua fillers. At launch, it came in two sizes, a 5 1/2 x 52 Robusto $8.49 and a 6 x 52 Toro $8.99. Both came in 20-count boxes and each limited to 3,000 boxes. In November of 2020, the companies released a new size, the Short Churchill. 2,000 boxes of the Short Churchill were made.

“6 1/2x 48 box-pressed minimal veining. Some soft spots to the bunch good thing they are toward the foot. Tight seams looks good construction-wise besides the bunch.” –Ryan H. (Ryan H.)

“After clipping the cap, I check out the cold draw to get a nice bit of sweet plums. Upon lighting, I’m hit with massive amounts of cloves right off the bat, paired with a bit of leather. There is also a touch of tangy citrus much like orange zest, but the more I think about it, it really reminds me of coriander with that warming feeling with the subtle citrus.” –Doug S. (Unpossible_1)

“Black pepper spice to start this one off this is the only note until about the one-inch mark when other notes start to appear. First note after black pepper is a new boot leather very pronounced and delicious. The draw is pretty resistive but with the thick chewy smoke, it’s probably better this way. Very minute citrus is now detected. The cigar is medium plus.” –Ryan H. (Ryan H.)

“The flavors are staying quite consistent which is fine with me. I am picking up some nutty flavors while chewing through the smoke on the finish.” –Mickey T. (irratebass)

“The second third continues with a similar profile as from the first third. Medium-full bodied notes of peppery earth continue with a bit of cream on the backend. A small addition of malty leather notes come into play on the backend of this third.” –John A. (Bostoneo)

“Not a lot of change from the beginning or middle third. It is far more earthy at the end and the strength has picked up just a touch. A little bit of pepper, cedar, and leather sort of round out the profile.” –Alan (Eulogy)

“The last third comes at me with a medium full-bodied smoke. Notes of peppery earth, cream, and a bit of grass come into play here. Working my way in a candy-like sweet and sour notes develop until the sourness takes over.” –John A. (Bostoneo)

“A little too tight for me and it took several starter puffs to really produce a good smoke output.” –Alan (Eulogy)

“Razor-sharp the entire way through. The ash will fall off easily and can make a mess.” –Alan (Eulogy)

“Lots of smoke, stayed cool with plenty of ash even though the ash was flakey here and there.” –Mickey T. (irratebass)

“It’s not bad. I found myself a bit more involved in the experience than I prefer with having to coax a few starter puffs to make it smoke properly and the constant ashing on myself was unpleasant. The flavors were solid though and the strength was nice without being overpowering.” –Alan (Eulogy)

“Overall, this was a steady medium-full bodied smoke. It was not particularly my cup of tea with the heavy earth and black pepper, however, I am sure it will please some pallets. Burn, draw, and construction was spot on and did not require any extra attention at all. Clocking in at a 75 minute burn time, I am sure there will be plenty of fellows who will enjoy this stick.” –John A. (Bostoneo)

“This was a great cigar. It was mild to medium in strength which gave me some nice cream mixed with floral and chocolate flavors with a hint of nuts here and there, but mostly on the finish. I would definitely smoke this again.” –Mickey T. (irratebass)

“Some unique flavors, especially the coriander, made for an enjoyable session. Box press is always hit and miss for me, as they seem to have consistency issues quite often. Either way, I wouldn’t mind smoking this again.” –Doug S. (Unpossible_1)

Blind Cigar Review: Espinosa | Warzone Short Churchill
Summary
"This was a great cigar. It was mild to medium in strength which gave me some nice cream mixed with floral and chocolate flavors with a hint of nuts here and there, but mostly on the finish. I would definitely smoke this again. " -Mickey T. (irratebass)
Appearance
88
Aroma
87
First Third
89
Second Third
89
Final Third
90
Draw
90
Burn
96
Construction
93
Overall Experience
91
91
Very Good