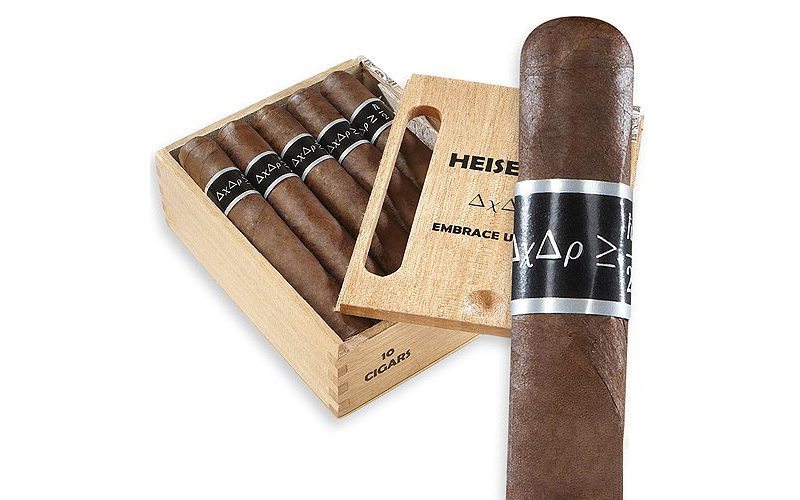 “This one has a couple of minor soft spots and a couple of veins running about half way up the length of the cigar starting at the foot. Nothing major, but makes it a bit less appealing.” –Milton (mjohnsoniii)

“Nice dark oily wrapper with some small veins. Firm with a little give.” –Craig (WyldKnyght)

“Scent is giving me a sharp tobacco scent with a little hay and wood.” –Nicholas (volpow61)

“Firm throughout. Not much give. Neat construction at the cap and seams. Nice. ” –Brian (B-daddy)

“Chocolate, Cedar and Spice are very dominant, sweet creamy smoke with a dry woodsy finish and a bite in the background.” –Ian (Sp@rky426)

“Sweet and mild, right from the first light. Pleasant light to medium bodied flavors that are primarily sweet but have some interesting leather and rich tobacco flavors to back it up. All the flavor comes on the draw and there is little/no finish to speak of. Even the retrohale is sweet and a little smoky; kind of like a toasted marshmallow. Ash is a beautiful tight white/pale gray stack. The draw is a bit tight; takes some work to get some smoke output.” –Brian (B-daddy)

“At this point, I’ve started smoking into the second third but half the cigar is still on the first third. The burn is terrible. No real change in flavor. This one is shaping up to be, and I dare to say, a yard gar. While there’s nothing “wrong” with them, I’m trying to enjoy this stogie, not prune hedges WHILE smoking it. I also find myself puffing way too often just to keep it lit.” –Milton (mjohnsoniii)

“Well, there’s certainly nothing unappealing about this cigar but it’s been pretty one-note ever since the first light. It’s a mild and sweet flavor profile that is smooth and easy to enjoy but there’s not much complexity to it. Sweetness backed off just a bit toward the end of this third and flavor became more of a straight tobacco. Burn got a little wonky and needed a touch-up. Still pretty enjoyable.” –Brian (B-daddy)

“Pepper started to pick up during the last third, some slight chemical flavor. The enjoyment continued from the first two thirds.” –Craig (WyldKnyght)

“Through the last third still getting some of those same salt and dough flavors but much more sourness now. Not too much has changed from start to finish.” –Nicholas (volpow61)

“Tight (-ish) through the first two thirds. Certainly manageable but a bit more resistance than I like.” –Brian (B-daddy)

“Burn was really nice through the first two thirds but got wonky and needed a touch up at the end of 2/3 mark. Not bad.” –Brian (B-daddy)

“This was a very good cigar, lots of creamy smooth flavors, great smoke and burn. Definitely going to smoke this one again.” –Craig (WyldKnyght)

“While spice is never something I enjoy, this wasn’t overpowering at all and with chocolate, sweet tobacco and cedar in the background it came together well. Not a very complex cigar by any means, but a decent smoke to say the least. Id keep a fiver on hand to age and see what happens with time.” –Ian (Sp@rky426)

“This cigar didn’t do a thing for me. It was bland at best. This is a cigar definitely to be smoked while doing yard work or for a lunch break when that wouldn’t mind snuffing out half way through. A total disappointment for me. Would I smoke another? Yes. Maybe I just got that one from the bunch that wasn’t “it”.” –Milton (mjohnsoniii)

“Overall an ok smoke, but it’s what I would call a flat cigar. Meaning it gives you that same flavor from start to finish with little to no complexity. I couldn’t see this being in my normal rotation. I would much rather have a cigar with more complexity to it. This smoke after a while could leave you bored. I definitely think there are better options to smoke.” –Nicholas (volpow61)

“Overall, I enjoyed it. It was an OK cigar. If it’s cheap, I think it would be a good yard gar. If it’s not, I wouldn’t buy it. There are several cheap cigars out there that provide the same or better experience. The term “yard gar” has a pretty negative connotation but there is quite a bit to be said for cigars that are pleasant, without being too complex. Also, cigars that are easy to smoke, have good consistent burns, and don’t take much tending to. Maybe this is one.” –Brian (B-daddy)