Altadis U.S.A. announced a new cigar from Trinidad in May: Trinidad Espiritu. This is the latest in a series of collaborations between Altadis and AJ Fernandez. Trinidad Espiritu is designed to evoke spirit of vintage Latin Caribbean culture. It is described as medium to full-bodied and is a Nicaraguan puro.

The original Trinidad brand comes from Cuba and was designed to be given only to diplomats in the 1960’s. This cigar celebrates the 50 year anniversary of that brand. The release featured nationwide events that each transformed one venue to the Latin Caribbean of yesteryear with décor, music, vintage uniformed bartenders, cocktails and more. There was also be an event only vitola: Trinidad “Fundador” Espiritu lancero 40 X 7 1/2. The Trinidad Espiritu comes in five vitolas: Robusto 52 X 5, Toro 52 X 6, Belicoso 52 X 6 1/8, Magnum 60 X 6, Fundador 40 X 7 1/2 (Only available at official Trinidad Espiritu events.) 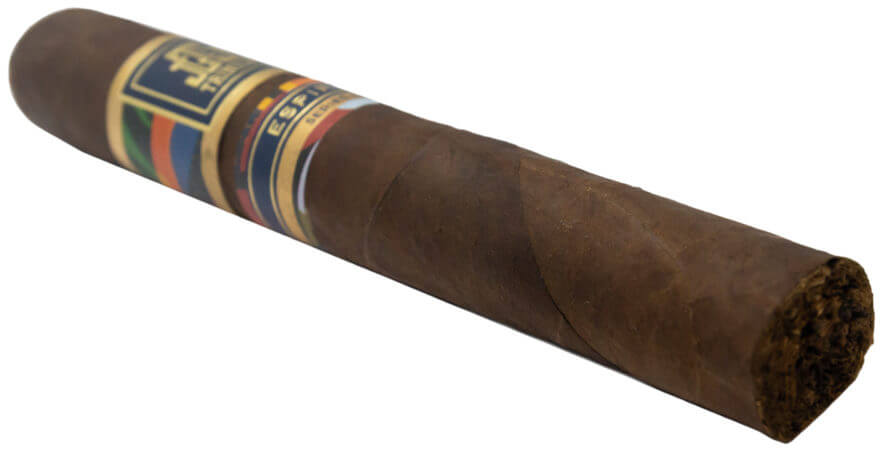 “On the nose, scents of delicious semisweet tobacco and cedar is clearly present. The cold draw reveals a peppery and musty mixture.” –John A. (Bostoneo)

“Off the bat, a delicious punch in the face of leather and sweet heavy cedar pour out coating the mouth, wow what a great profile to start things off. The profile begins to settle down into a nice medium bodied profile as leather, caramel, green peppercorn, and ample amounts of cream seriously make this a great third. ” –John A. (Bostoneo)

“A very mild yet flavorful beginning for this macho looking cigar. There is an abundance of caramelized sugar and hints of leather… through the nose the smoke is pleasantly spicy.” –Jason H. (Jokey Smurf)

“The flavor wave continues with ample amounts of sweet caramel cream, cedar, and candy bar nougat with a walnut like dryness, simply divine. Towards the backend, green peppercorn noticeably increases as this third comes to an end. ” –John A. (Bostoneo)

“That tea flavor has returned, but now it’s more of a sweet tea than just regular tea. As the cigar progresses i’m really surprised/shocked at how sweet this cigar is. It is NOT a flavored cigar, but there is some definite sweetness going on with this cigar……NOW I’m getting a syrupy bead flavor…..this is a new one for me. ” –Mickey T. (irratebass)

“Not trying to repeat myself, but damn this cigar is sweet! Whoa now the spice kicks in, and I start getting a nicotine buzz…..been awhile since I’ve had one of those…….it’s making me uncomfortable. ” –Mickey T. (irratebass)

“This cigar has started mild and is finishing the same way… lots of sweetness and a hint of leather. As I’m nearing the end there is a bit of charred wood entering the flavor profile but it is far in the background and just enhances the caramelized

“As tight as this felt packed, draw was dead nuts.” –Doug S. (Unpossible_1)

“Other than the re-lits there were no issues. The cigar never got hot and gave me enough ash.” –Mickey T. (irratebass)

“This was one fantastic cigar. The intensity of the flavors were so enjoyable alongside the semi sweetness it provided were phenomenal. Complexity was the name of the game with this medium bodied smoke. I look forward to smoking more of these as soon as i know what it is!” –John A. (Bostoneo)

“Despite fighting with the burn I really enjoyed this cigar. There was a lot going on with it. Plenty of sweetness for the milder smokers, but also spice for the heavy hitters. I am going to seek these out once I find out what they are/were so I can try this in a smaller size, an see if I still get all those transitions. This was a really different cigar for me. ” –Mickey T. (irratebass)

“This was a solid stick that I could see smoking after a meal, with a nice finger or two or three of bourbon. It built its way up through each third, never overpowering but had enough at the end to finish with a bang.” –Doug S. (Unpossible_1)

“This was a fine example of a mild cigar that can capture your attention and keep it until the end… the sweetness was really nice and the slight nasal burn on retrohale was just right. It just goes to show that it doesn’t always need to be full bodied to be great!” –Jason H. (Jokey Smurf)

Blind Cigar Review: Trinidad | Espiritu Toro
Summary
"This was one fantastic cigar. The intensity of the flavors were so enjoyable alongside the semi sweetness it provided were phenomenal. Complexity was the name of the game with this medium bodied smoke. I look forward to smoking more of these as soon as i know what it is!" -John A. (Bostoneo)
Appearance
90
Aroma
89
First Third
89
Second Third
92
Final Third
92
Draw
89
Burn
91
Construction
93
Overall Experience
93
91
Very Good