The Classic line from United Cigars is a value focused line that comes in three blends: Cuban, Connecticut, and Maduro.

The Cuban blend was made to mimic the legendary Cuban Cohiba and Montecristo brands in their hay day, but at a more affordable price. All three blends come in the same four sizes: Corona (6 x 44), Robusto (5 x 50), Torpedo (6 x 50) and Churchill (7 x 50). 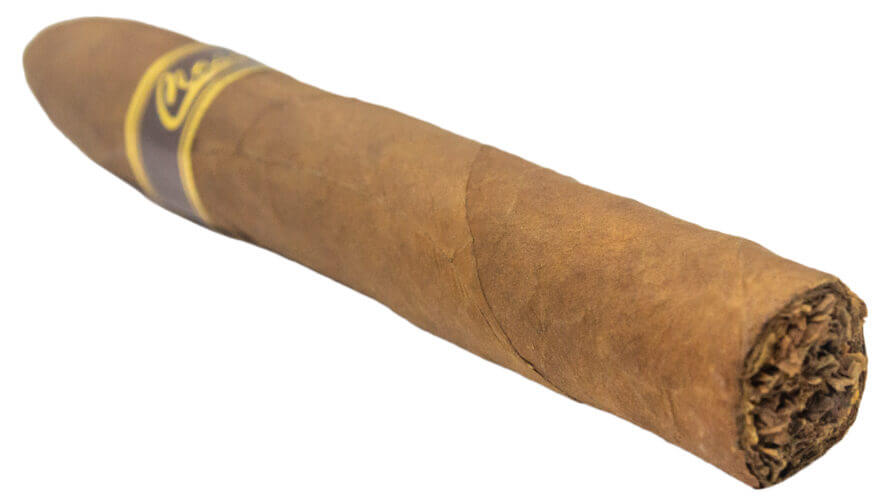 “While this cigar isn’t the prettiest girl at the prom, she’s not ugly enough to where I won’t dance with her after a few drinks. There’s a slight crack at the foot and some minor lumps and soft spots present but all I ultimately care about is how she smokes…” –Matt Cade (CadeTNCC)

“The foot of the cigar smells spicy. Predominantly fresh ground black pepper. It almost makes me want to sneeze. The pepper is also apparent in the body of the cigar, along with hay and cedar. Prelight draw, which is a little tight which may be my fault with the cut on the torpedo cap, has hints of the black pepper and anise, with a little bit of hay and cedar. This should make for an interesting cigar for sure!” –Kevin A. (Kevin A.)

“Wow, the first few puffs have almost no spice to them. The first notes detected are sourdough, walnut, caramel and a little bit of cinnamon. There is some pepper on the retrohale, but it is more of a mild white pepper. The black pepper detected in the prelight finally appears and sits on the tongue, with a long finish, but not overly powerful one. There is an underlying sweet cream, making this a very enjoyable and mellow start to the cigar” –Kevin A. (Kevin A.)

“A distinct grassy component accompanied by some tea is very apparent on the cold draw. Upon torching the foot of the cigar, first impressions are of black pepper through the nose and a very nice creamy coffee flavor on the draw. That spice on the retrohale is playing nicely with that cream and coffee and I was happily surprised to find a floral note develop towards the end of the final third.” –Matt Cade (CadeTNCC)

“There’s a lot more earthy notes this round. It’s fairly dry on the palate but with a great smoke output. I’m finding salt, leather, cedar, mineral, chalk, and an occasional meatiness to the draw. The retrohale has a bit more black pepper bite than the draw. ” –Alan (Eulogy)

“The intensity picks up a little moving into the second third. Black pepper arrives, along with a lemon zest that creates a flavorful zing on the retrohale. The sourdough, walnut, and cinnamon are all still there as well, making for a rather complex flavor combination. The underlying creaminess still holds everything together and lets the flavors just sit on are areas of the tongue. Even better, all of the flavors are working together. Draw is about as close to perfect as you can get, and burn is nice and straight. ” –Kevin A. (Kevin A.)

“The coffee re-emerges as the dominant note in the final third but there is still the mineral and a now heavily muted floral component hanging in there. Pepper on the nose has faded considerably throughout the duration of the smoking experience to where I barely notice it here at the end.” –Matt Cade (CadeTNCC)

“Interesting notes to end this cigar. Notes of incense and spearmint make this an intriguing smoke.” –Sean F. (fullermaine)

“The draw is great. Just the right amount of resistance with huge clouds of creamy smoke. ” –Alan (Eulogy)

“There was a brief moment where the burn line was growing uneven but it eventually corrected itself without any intervention.” –Matt Cade (CadeTNCC)

“Even with the leathery feel of the wrapper it seems it was slightly delicate. A few chips formed while I was smoking but it didn’t cause any issues in terms of smoking. For the most part it was well constructed with mostly nice seam work and an attractive torpedo cap. ” –Alan (Eulogy)

“Very interesting cigar. Notes of sweetness come through. Sugar, sweet tea and vanilla notes come through on the first two thirds. Spice notes to end this smoke. Notes of incense and spearmint round out this stick. If you like old school smokes, then this one is for you.” –Sean F. (fullermaine)

“It has a very interesting profile with a couple of profile changed thrown in. If you like green flavors in your cigars it’s a pretty good cigar. The smoke output is excellent, construction is great, and the torpedo cap gave it some character prelight. ” –Alan (Eulogy)

“This is one of the better cigars that I have smoked in a while. I love complex blends. Sometimes they just don’t work as there is too much going on. This is not one of those cases. The cigars starts off mellow and complex, and develops into a spicy tantalizing finish where each puff leave a satisfying finish on the palate. Med/Full in strength and body, I did not get a high level of nicotine, so it should be able to be enjoyed by smokers of all experience levels. If you like cigars that are flavor filled, have great transitions, and develop in enjoyment along they way, give these a try!” –Kevin A. (Kevin A.)

“While the cigar’s appearance didn’t impress me at all initially, this was a clear cut case of never judging a book by its cover. The cigar provided a wide array of flavors and transitions and the end result was a highly enjoyable cigar from start to finish. I would definitely smoke it again. ” –Matt Cade (CadeTNCC)

Blind Cigar Review: United Cigar | Classic Cuban Torpedo
Summary
"While the cigar’s appearance didn’t impress me at all initially, this was a clear cut case of never judging a book by its cover. The cigar provided a wide array of flavors and transitions and the end result was a highly enjoyable cigar from start to finish. I would definitely smoke it again. " -Matt Cade (CadeTNCC)
Appearance
87
Aroma
92
First Third
91
Second Third
91
Final Third
90
Draw
95
Burn
90
Construction
89
Overall Experience
92
91
Very Good