Daniel Marshall has announced a new cigar in partnership with Carlos “Carlito” Fuente called the XXXVIII (38th) Anniversary. The cigar debuted at at A Special Charity Dinner for Climate Action in Kitzbuhel, Austria. The event took place at the Daniel Marshall Cigar Lounge. 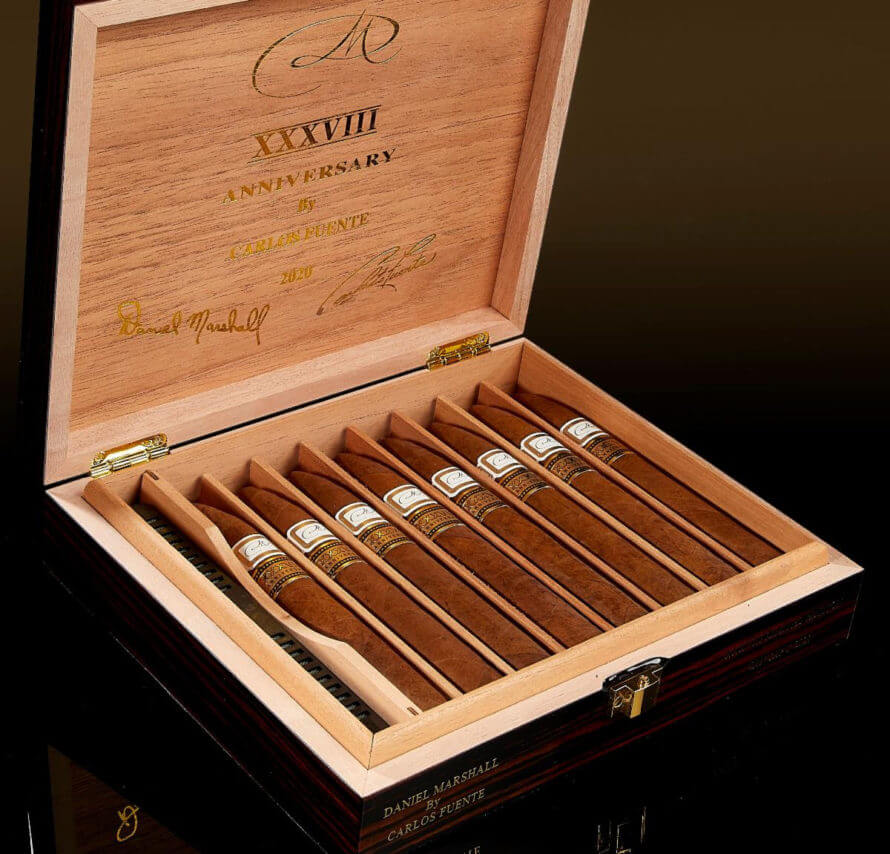 Carlos “Carlito” Fuente told Marshall, “I want to do something for you very, very special. I am making a cigar for you, which I do for no one, to commemorate our long time friendship and my highest respect and admiration for you and your story. It’s an honor to be able to participate with you on this special anniversary. I poured my heart in to every detail, hoping to make you proud. I will give you my best.” 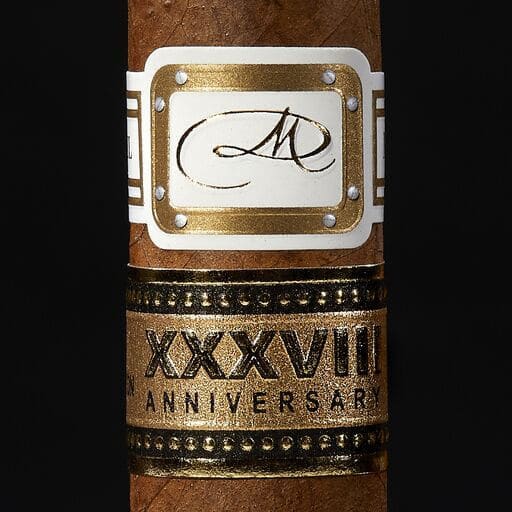 Fuente and Marshall developed this blend for three years before presenting it to guests at their dinner and a live auction. Each cigar is rolled by one individual in the Chateau de la Fuente and is blended with tobaccos up to 12 years old and then aged a minimum of one year after rolling in special cedar vaults. The “Daniel Marshall by Carlos Fuente XXXVIII Anniversary Cigar, Limited Edition 2020” will be sold at select world-wide Daniel Marshall Campfire events, and allocated to 38 of the world’s top tobacconists and iconic hotels, representing one location for every year Marshall has been a part of the cigar world. Locations include Japan, Hong Kong, South Africa, London, France, Belgium, Germany, Dubai, Qatar and for a limited time in the United States. Marshall will be hosting his signature “Modern Day Campfire” events at each of the 38 international destinations. 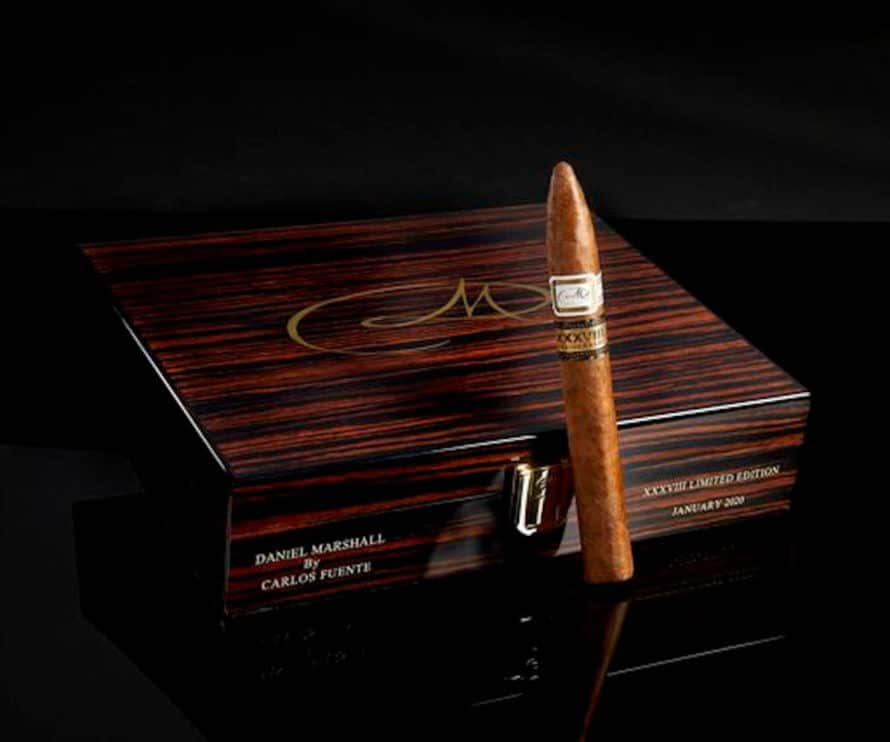 “Carlos and I grew up together from boys to men sharing similar values, commitment to quality and an unrelenting quest for the best. What joins us together, the golden thread that runs through our veins and drives us to live our dreams, is a commitment to create in all we do a richness of character and generosity of spirit” says Daniel Marshall. 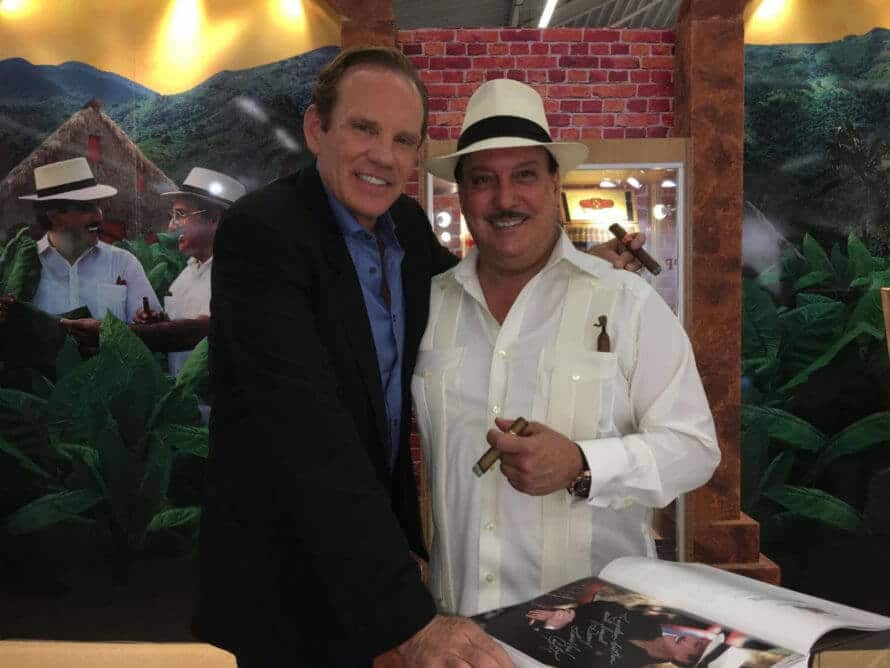 After meeting in 1982 Fuente and Marshall toured the United States with Marvin Shanken’s Cigar Aficionado Magazine, exhibiting at the “Big Smoke Events” that led to worldwide cigar education. This is the 38th year since Daniel Marshall founded his first workshop in California where he began creating luxury humidors for Alfred Dunhill of London. Also, 2020 commemorates the 25th anniversary of the first DM Cigar and the iconic Fuente OpusX Cigar, as well as the 108th year anniversary of Arturo Fuente. 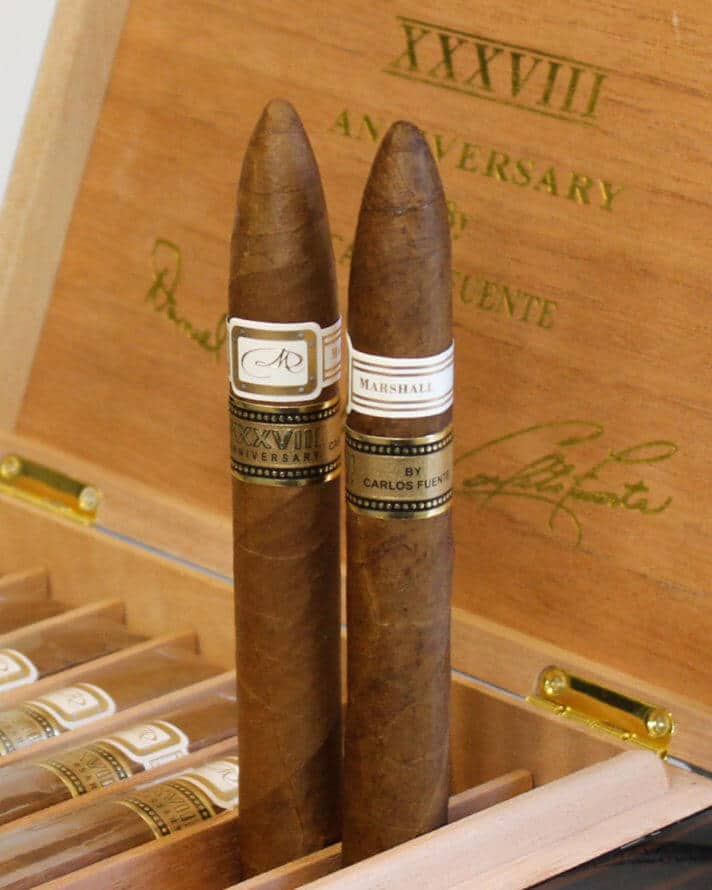 The new cigars come in a humidor designed by Marshall and Fuente. Each humidor is individually numbered and the distinctive rounded black edging and Marshall’s trademark “1000 coat finish” accentuate the beauty of the rare woods. Marshall chose macassar ebony as this was the wood he used to create his very first humidor for Dunhill. The DM humidor will hold 8 of the DM XXXVIII Anniversary Cigars and includes a removable Spanish cedar tray that can increase the capacity to 16 cigars. The collectible humidors are embellished with a golden DM motif on the top as well as on the front in gold – “Daniel Marshall by Carlos Fuente – XXXVIII Limited Edition January 2020.” 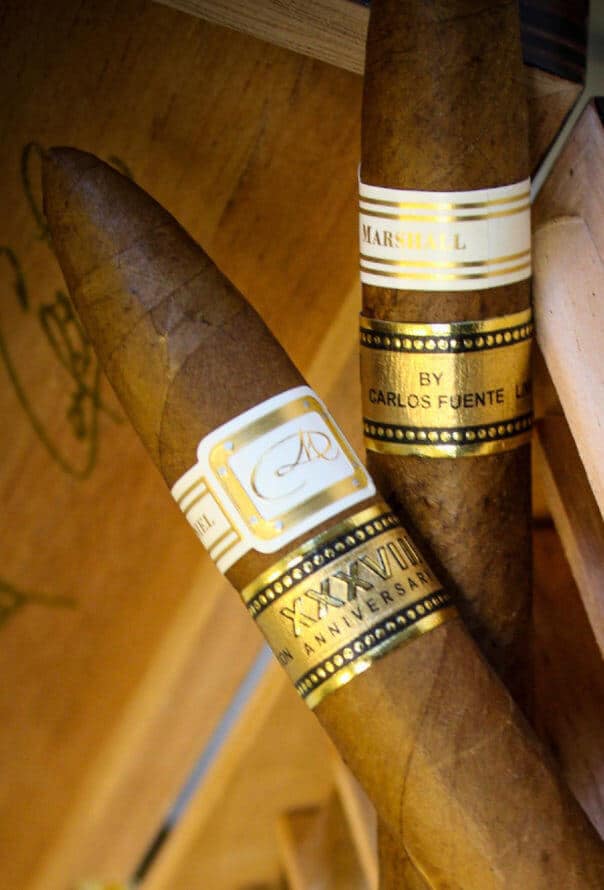 Marshall adds, “The DM XXXVIII by Carlos Fuente cigars are precious, they represent everything I look for in a cigar, effortless draw, rich and smooth taste, a cigar that comes alive. I told Carlos, ‘With this cigar, I am torn. Half of me wants to light it, half of me wants to eat it.'” Fuente responded, “Brother, it is good enough to eat.” The super premium XXXVIII is made in one vitola, a classic favorite of Marshall and Fuente. The pyramid shape is treasured because the tapered head allows the complex flavors of the cigar to marry in the mouth. In this coveted jewel, you can taste time.