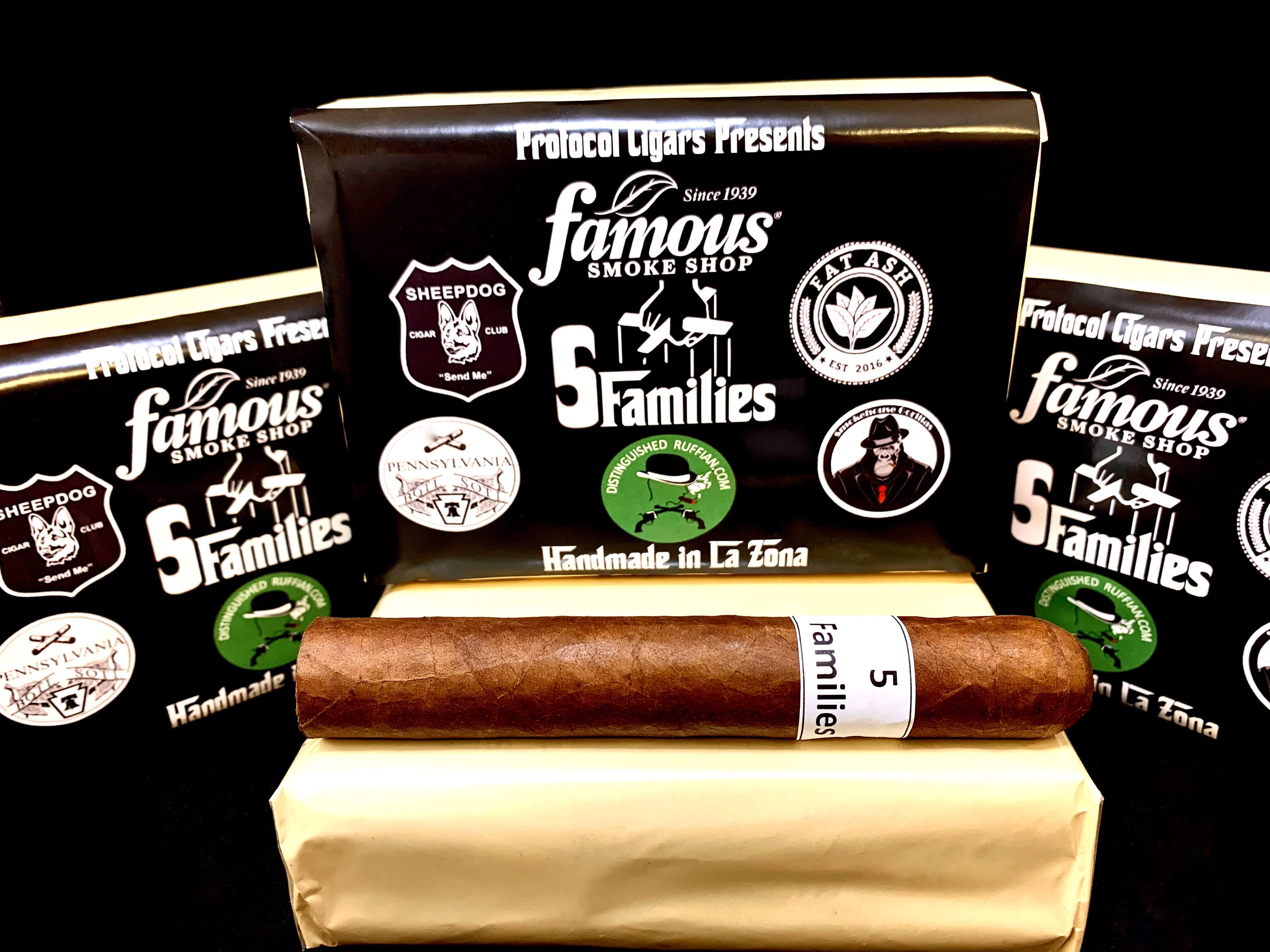 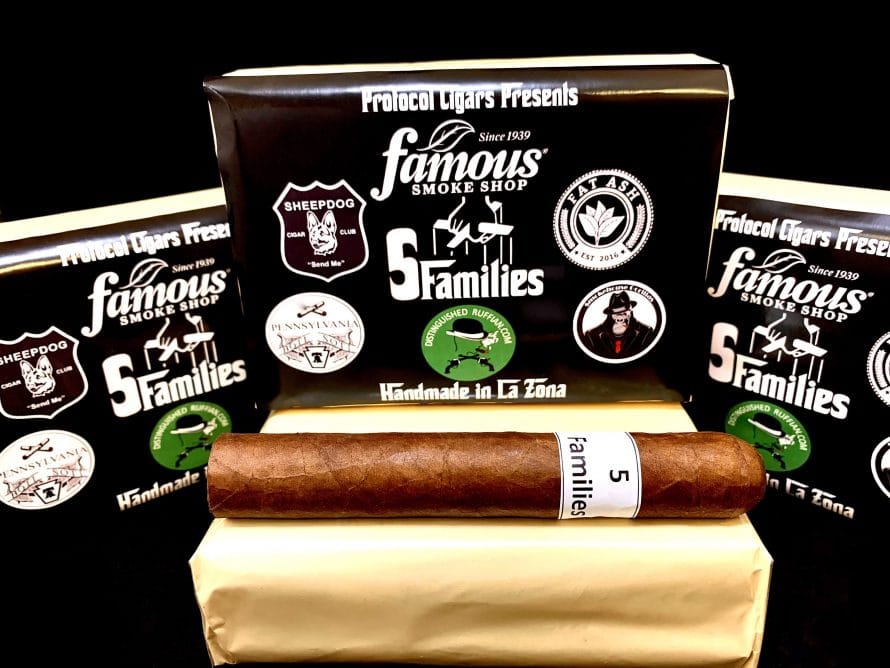 Protocol has announced a new limited edition cigar called the 5 Families. This cigar is a tribute to 5 cigar clubs that support the Protocol. This will be an exclusive release through Famousn Smoke Shop. This is also the first 6×60 from the company. 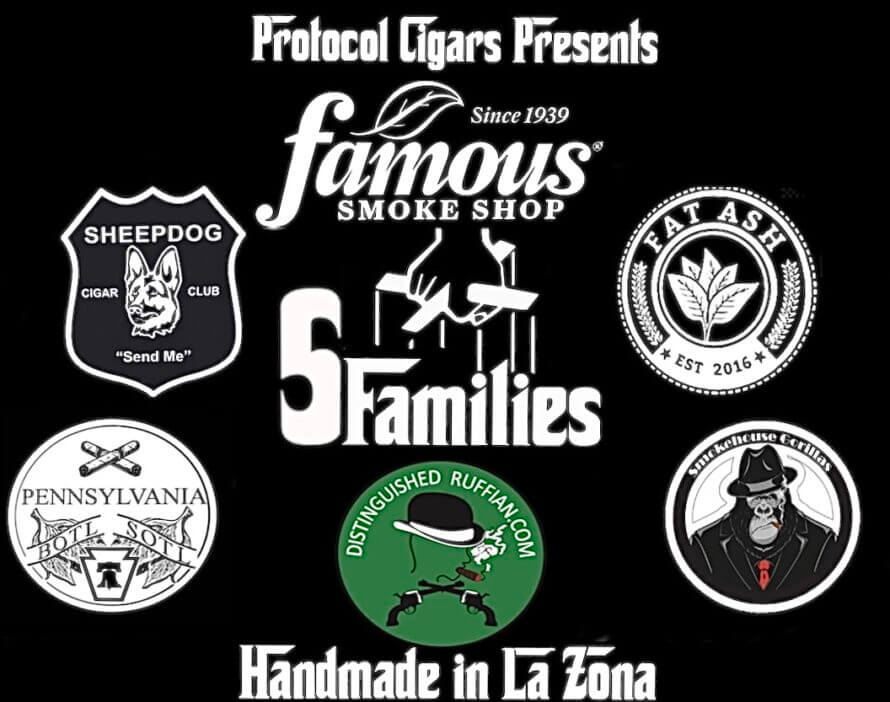 Fat Ash was founded in 2014 by Dax Single and Brad Weidenhammer, but later rebranded in 2016 where they brought in David Papp. Fat Ash has over 2,700 members on their facebook group page. Protocol created a Fat Ash Cigar for them in 2018, which has grown to become a yearly release, with the latest installment being Fat Ash Year 3 in 2020.

Smokehouse Gorillas was founded in 2017 by Al LaPeter. They have 1,300 members on their facebook group page. They consider themselves a HERFing Community. Protocol Cigars have done Smokehouse Gorilla events with the club in the past and maintains a great relationship with them.

BOTL PA Chapter, Brothers Of The Leaf is a term we have all heard before and it is a testament to the brotherhood that is shared for the love of cigars. The BOTL movement has chapters in every state. The BOTL PA Chapter was founded in 2017 by Rick Riley. They have grown to over 1,700 members.

5 Families goes on Saturday, October 3rd, 2020 at Famous Smoke Shop from 1pm to 5pm, located at 90 Mort Drive, Easton, PA 18040. The event will be held outdoors with the Leaf Cigar Bar and Restaurant working at a 50% Capacity as per PA CDC/DOH Covid 19 regulations. There are 100 ten count bundles available. The blend uses an Ecuadorian Habano wrapper with Nicaraguan binder and filler. This Gordo is Protocol’s first 6×60 size. 5 Families comes in 10 count paper bundles with an MSRP of $99.99. The first 100 bundles will be available at the time of the event. If any are remaining, they will go on sale via Famous Smoke Shop: telephone 610.559.8800 starting Sunday, 10/04. Part of the proceeds of this event will go to Cigars for Warriors. To learn more about Cigars for Warriors or to make a donation, please visit https://www.cigarsforwarriors.org/

“We are excited to do something special for these 5 cigar clubs that support us!” said founder and owner Juan Cancel. Kevin Keithan, owner added; “For this special project we wanted to do a special vitola. Everyone has been asking us for a 6X60 offering… so here they go, but they will go fast!” Nicole Patoki, General Manager of Famous Smoke Shop explained; “We are so happy to be teaming up with Protocol Cigars once again, along with these 5 phenomenal Cigar Clubs in support of Cigars for Warriors!”