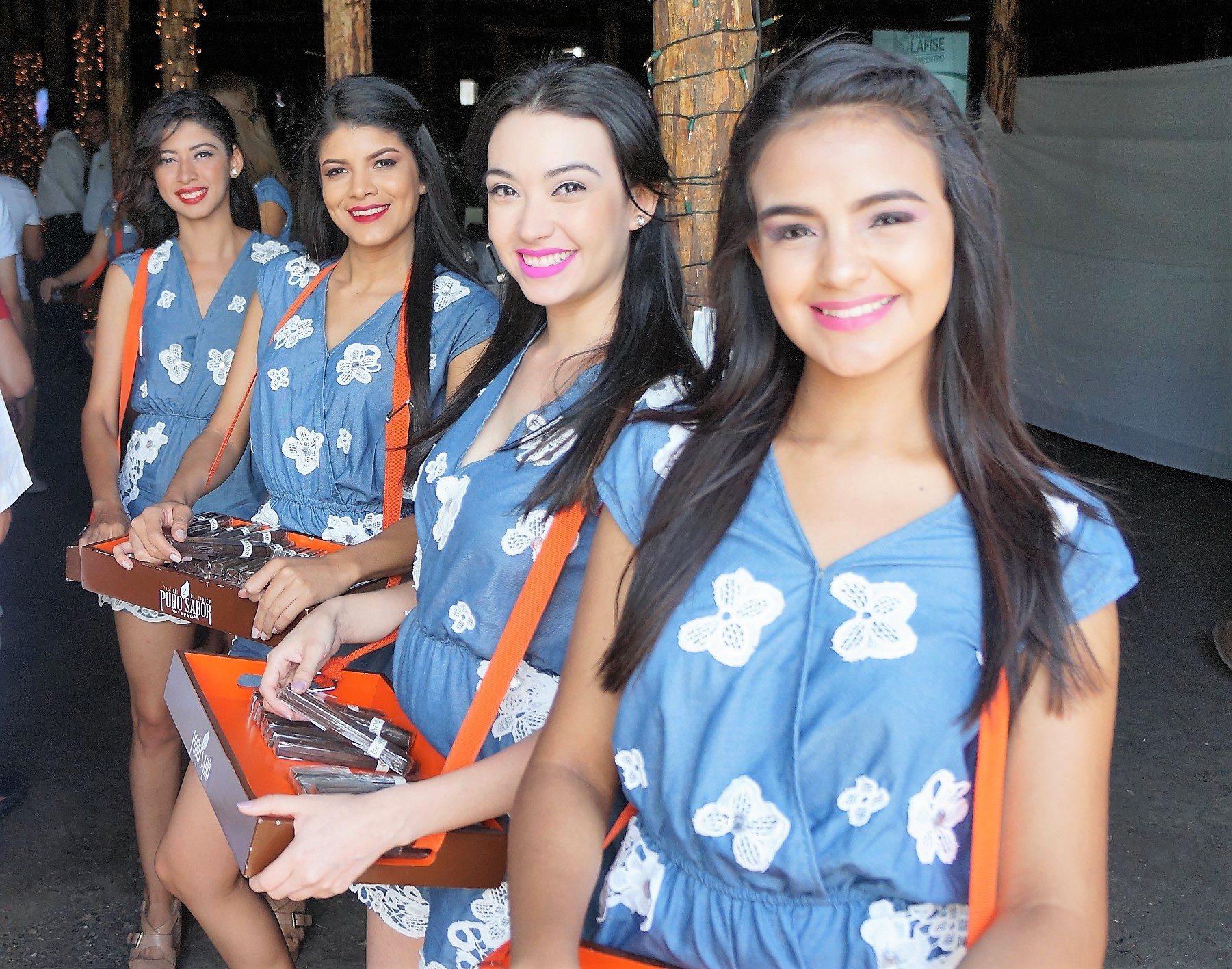 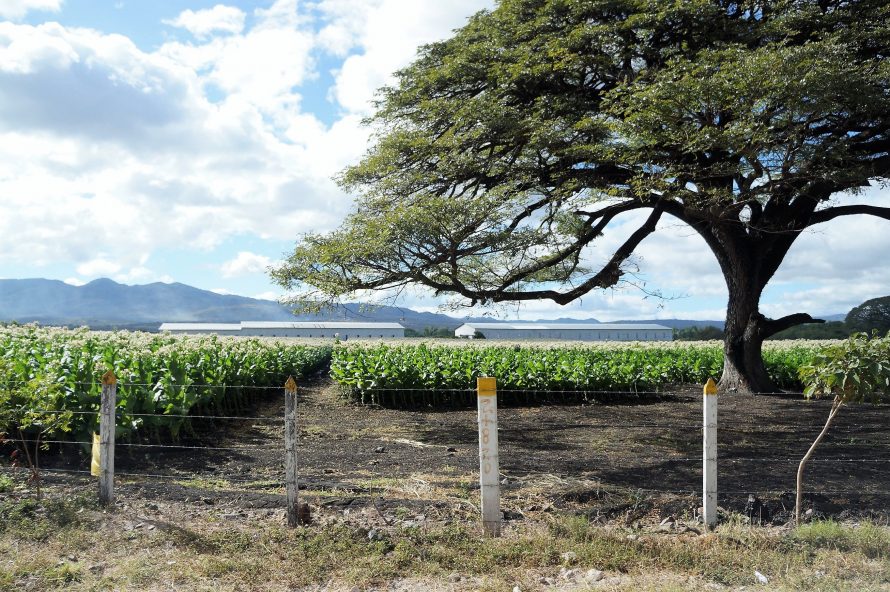 As we close out our series on Puro Sabor 2018, let’s take a look at the events that made the week special.  In all honesty, even the everyday lunches were special events.  It seemed like every time we gathered for a meal, the organizers pulled out all the stops and made it a grand occasion instead of just another meal.  One of my favorite things about all of these events was the reality of being able to sit down with people from all over the world, all walks of life, and all manner of experience in the cigar industry.  We were all the same at these events.  It was just an enormous group of friends gathering for a meal, some drinks, and great conversation  –  oh that’s right… let’s not forget the dancing. 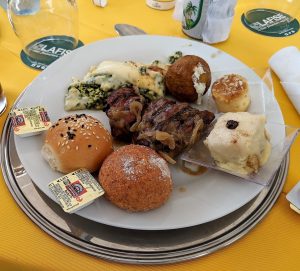 The Lunch Events
When you have busloads of hungry people, it could be easy to try keeping it simple.  You could say “Let’s have some sandwiches and bags of chips, maybe bottled water and a cookie.”  When I think of all the corporate box-lunches I’ve had that follow that recipe, it is enough to make me a little sad. The people at Puro Sabor would have none of that nonsense. Even the so-called “simple lunches” were each like an extravaganza.

To start, every lunch featured dishes that are known to be classic Nicaraguan fare. While it was buffet and large quantities, each dish still had clean and simple flavors, prepared with care and attention to detail. As a self-proclaimed carnivore, I was always happy to find plenty of meat options to choose from. Also, we had no shortage of the staples like rice and plantains, typically prepared with good flavor and texture. The desserts, even at the lunches, were delicious and plentiful.

To make each lunch even better, the settings were each unique and beautifully organized. As the bus arrived at each lunch we were always greeted by lovely ladies handing out cigars. What the Puro Sabor organizers called “cigar moments”, the first of which was supplied by Plasencia.  Then the area was row after row of linen-covered tables, nicely decorated and ready for us to sit and enjoy a midday meal. The servers and other staff were friendly and prompt, so waiting for a beverage was rarely a problem. 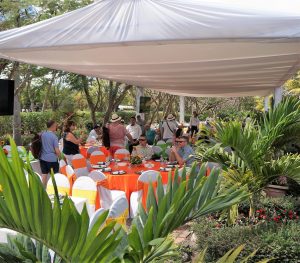 Each location was also beautifully arranged and uniquely staged. Our first lunch event was hosted at the beautiful Casa Hacienda El Tuco, a Plasencia facility.  It is a great spot with beautiful architecture, stunning courtyards and flowers, and plenty of space for conversation. These daily events are also a nice chance to connect with people who may not be a part of your direct group. Our second “cigar moment” at this lunch was courtesy of J.C. Newman. 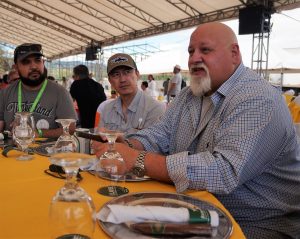 The lunch event on the following day was hosted at Cigar Rings.  If you think you’ve never heard of Cigar Rings, you are probably mistaken.  They design and make many of the bands on some of the biggest names in the cigar world. While the setting for this lunch event may not have been quite as picturesque as some others, the focus was really on a large stage that was set up. 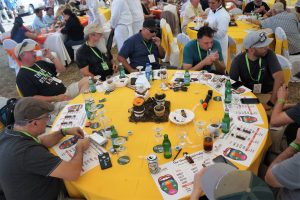 We were taken through an informative, albeit brief, blending seminar.  The lovely ladies passed around 3 small cigars to each attendee.  Each cigar was a puro of Seco, Viso, and Ligero. These accompanied a colorful tasting chart and some detailed explanations from Claudio Sgroi from Mombacho Cigars. Many of the guests really enjoyed this special part of the lunch break. 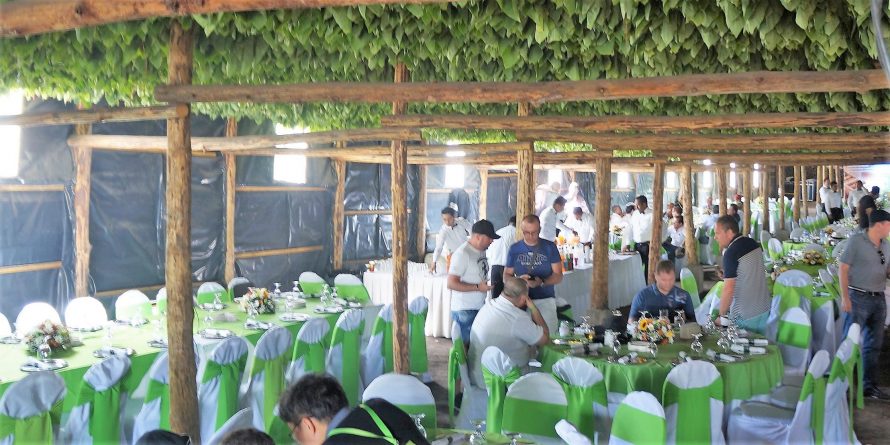 The setting for lunch on the final day was really fantastic.  We were led into one of the large curing barns at a tobacco farm called El Buen Vecino (The Good Neighbor). The interior of the barn had been transformed into a beautiful dining space filled with lights, and a canopy of tobacco leaves overhead. 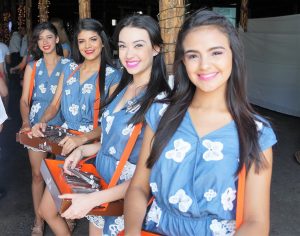 Some of the cigars accompanying this meal included RoMa Craft and Casa Fernandez.  Also, a special cigar was handed out that was made by Joya de Nicaragua, produced just for Puro Sabor 2018. 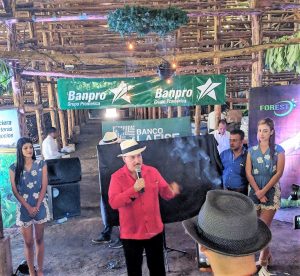 One interesting and unexpected event at this lunch was a brief presentation from Carlos (Carlito) Fuente, Jr.  He announced that Fuente Cigars will build a new factory right in Esteli, slated to break ground very soon. The factory will be called Gran Fabrica de Tabacos La Bella y La Bestia. This roughly translated to The Beauty and the Beast Factory. When Carlito unveiled the concept art for the upcoming factory the name Beauty and the Beast became clear, as the building design seemed to be reminiscent of a castle in a Disney animated feature.  Truth be told, although they have been growing their tobacco and making their cigars in Dominican Republic for over two decades, the Fuente family have some very deep roots in Nicaragua. Even so, I could not help but notice some heaviness in the room when the announcement was made. In the end, a Fuente factory in Esteli will be good for Esteli. It will certainly increase pressure on the other big players already established in Esteli, but competition typically breeds quality. As a cigar consumer, that is a good thing.

The Dinner Events
Without a doubt, a festival of this magnitude can be at risk of getting stale day-to-day. Sometimes the tours can almost seem like the same place, the speeches can sound like the same speeches, and the meals can taste like the same meals. That was not the case with the wonderful dinner events at Puro Sabor 2018. Unfortunately because I was not feeling well, I was unable to attend the dinner on opening night.  It was hosted at the Museo de Convento in Granada. 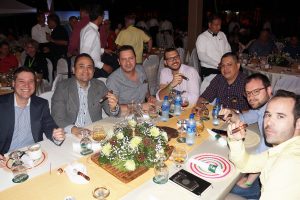 The dinner event on day three was hosted at Joya de Nicaragua.  The facility is beautiful in the light of day, but for this evening event they fired up the lights and turned up the music.  The brick outer wall of the factory was bathed in light, and the courtyard was filled from end to end with all of the guests eating, drinking, and dancing. I was finally able to have some conversations with a few people I had been wanting to meet. Notably, the crew from Hand Rolled. I am very excited for their documentary film project to be released and hopefully will have a chance to get to know more about their story in the future. 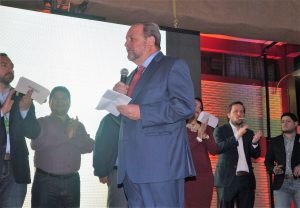 As hard as I tried, I was unable to pin down Juan Martinez to say hello and thank you, but he is so busy not only with the day-to-day operations of Joya de Nicaragua, he also serves on the board of Puro Sabor.  We heard remarks and speeches from some notable guests including Anielka Ortez (Tobacco Chamber President) and Alejandro Martinez Cuenca (Joya de Nicaragua). The rest of the evening was filled with Flor de Caña right from the barrel, dancing, and great conversation. 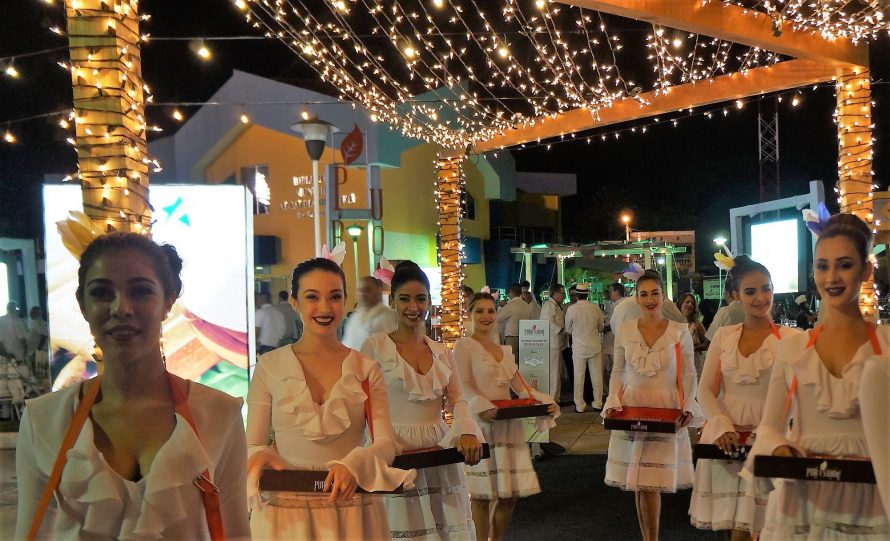 On evening 4, the dinner took us right to the heart of Esteli at the Museo Municipal. This night certainly had the bright lights and wonderful food like the others, but we were also given some nice moments of reverence and reflection. The cigar community lost some of our most beloved patriarchs recently, and Puro Sabor paid tribute to them during this event. Tribute was paid to Gilberto Oliva Sr. which was followed by a very heartfelt and moving homage to José Orlando Padrón. 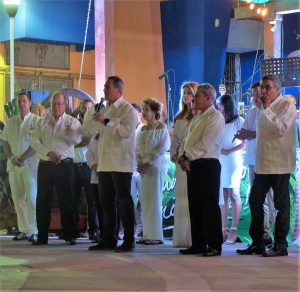 This included a portion of a video interview with Mr. Padrón that was played for us, closing with a very emotional speech by Jorge Padrón. Aside from an occasional car driving by, or a gust of wind, you could hear a pin drop during the tribute. It was one of those occasions when I truly just felt privileged to be there. The evening continued with more friend, more drinks, and some nice live music.

On the final night, the Gala event was hosted at Drew E state’s DE2 facility. It was meant to be a formal event and most of the guests really took that to heart, as everyone was looking very sharp.  My new friend Jukka, from Helsinki, was even fully decked out in a white tuxedo. Very James Bond.  Even with the formal attire the event was still laid back and fun, with plenty of music, booze, and more great food.

I desperately wanted to stay with everyone at the party to drink and dance until late into the night, but my shuttle was leaving for the airport at 3:00 AM, so I made the responsible, yet lame, decision to go back to the hotel and sleep a few hours.

thought I was trying to be responsible by going back early, but once I arrived back at the hotel I found myself talking and having another cigar with some new friends. That’s one of the best parts about a trip like this – Even for an introvert like me, cigars naturally seem to create opportunities for conversation. I hope the people who organize Puro Sabor know how grateful I am for the chance to go on this adventure. I also hope all of the people in Nicaragua who make the cigars that we love so much know that I am deeply thankful for the little pieces of art that they make every day that bring me so much enjoyment.

As cigar lovers, we should all spend a moment every time we light a fine cigar to be grateful for the many hands who brought it into being. It may seem like a simple rolled up tube of tobacco leaves, but it is so much more. It is an art, a craft, a job, a prayer, a lifestyle, a passion, a tribute, and a joy. Next time you fire one up, take just one moment to remember that. Thank you, Nicaragua.