“This cigar isn’t pretty.  It has a dark brown wrapper that has red tint to it in certain light.  The wrapper also has this marbling effect going on where it is between dark brown, light brown.  The wrapper is bumpy, veiny, and there is many visible glue stains. The aroma of this cigar was pretty boring, light tobacco.” -Will (Dubv23)

“Cigar has a few blemishes on the wrapper, with one large vein running along the entire length but overall is in good shape.  Looks like it’s got some age. Close inspecton reveals a few crystalline specks on the surface of the wrapper. Satiny smooth wrapper (no tooth). Pre-light scent of soft tobacco and cedar.” -Brian (B-daddy) 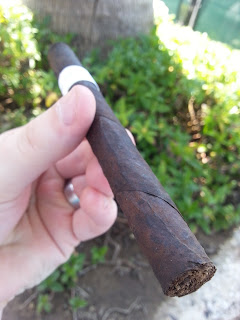 “Good solid cap, firm with no soft spots, draw was a little tight for me, used bore tool to open and then it was perfect. Burn was perfect the entire time.” -Robert (NavyPiper)
“The draw was a little looser than I prefer but the burn was razor sharp throughout.” -Emmett (rhetorik) 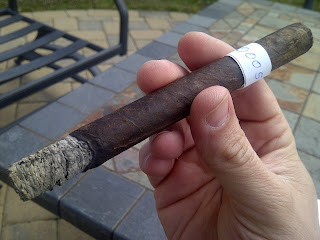 “There is some nice spice in first 1/4 inch followed by more fresh tobacco and a typical maduro sweetness. There is a very distinct and pleasant black cherry finish.” -Emmett (rhetorik)

“From the first draws the flavors start with a rich tobacco and leather core. The leather lingers on the finish.  I start getting some black coffee and pepper flavors in the draw and stronger on the finish. The retrohale reveals some musty earth flavors; almost like mushrooms. This cigar is producing some very thick smoke and rich flavors but not getting too much strength.” -Brian (B-daddy) 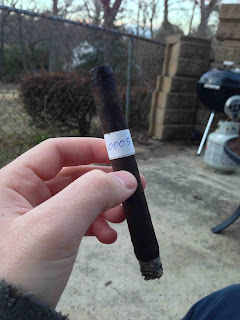 “Strength picks up a little with notes of cocoa dough and citrus not overtly complex just enough to keep you smokin.” -Nicholas (Volpow61)

“I’m still getting the rich eath and leather core but getting a hint of sweetness now. Not surgary, more like some black-cherry mixing with the coffee notes. I’m also getting more of a pepper zing on my tongue and a slight touch of ammonia on the retrohale. It’s not unpleasant, just enough to clear my sinuses.  The mustiness is also still here, pungent. It doesn’t seem to be losing any of the flavors from the first third, they’re just building in layers. Taking turns at the forefront and background every few draws.  Really a rich and complex cigar. Strength is still about a medium. I’m enjoying this.” -Brian (B-daddy)

“Picking up notes of coffee wood and chocolate. The strength and body are building in this third. The black cherry flavor has made its way to the surface now and it is quite pleasant.” -Emmett (rhetorik) 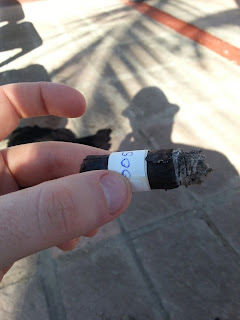 “Bitter coffee, molassess sweetness, and a nice lingering spice rounded off the cigar.  The flavor was good but did not wow.  The cigar was not complex by showing a similar profile for the length of the cigar without much change.  Strength again was on the low medium side.” -Will (Dubv23)

“Going into this third, had again an initial blast of pepper and some harshness, but again it blended out like the second third with the same flavors, and mellowed out wonderfully! Nubbed this bad boy til I scorched my fingers!” -Robert (NavyPiper) 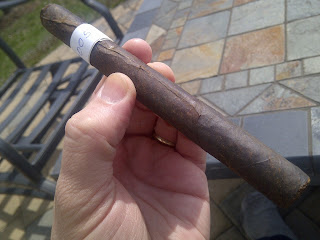 “This thing had flavors mixing and coming and going on every few draws.  I was really impressed with the complexity and enjoyed this flavor profile.  I want more of these.” -Brian (B-daddy)

“This was a good cigar with good flavor and really excelled in construction.  The important characteristics mentioned made up for the unpleasant aesthetics of the wrapper.  It does not seem as if it was intended to be a cigar focused on strength because it brought forth a pleasant medium body smoking experience with flavors anyone could enjoy.  It did however lack in complexity and could have benefited from some refinement of flavor as the bitterness could deter some.” -Will (Dubv23)