Back in Business: Sam Leccia Returns 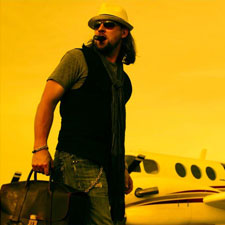 Sam Leccia, who was the original face of the NUb and Cain cigar brands, has returned to the cigar industry. Leccia told Cigar Aficionado today that he was back in the cigar business as the owner of Leccia Tobacco. The Pittsburgh, Pennsylvania company is poised to launch its first cigar brand, Black & White, which will be distributed by Toraño Family Cigar Co. of Miami. The cigars will go on sale beginning in May.

This is the second time Leccia has returned to the cigar business. In May 2011 he announced he was coming out with a Toraño-distributed brand named Debut, but a lawsuit from Oliva Cigar Co.—the maker of NUb and Cain, and Leccia’s former employer—curtailed his plans. Leccia countersued. Oliva’s suit was based around a non-compete clause in Leccia’s contract, which kept Leccia from working in the cigar business.

“For the last couple of years I’ve been dreaming of the day when I could get back to the industry that I love,” said Leccia.

The Black & White brand will have two blends, one called Black and one called White. White is being rolled by a small cigarmaker in Nicaragua, while Black is being rolled in a small factory in the Dominican Republic. Black features a leaf of fire-cured tobacco, seldom used in the cigar business. (Almost all cigar tobaccos are air cured.) “I have never smelled anything like this,” said Leccia. “We ended up using half a leaf in the blend…. It’s dark fired, it’s wood cured, which gives it that smoky aroma—it’s incredible. I don’t think it adds too much but it ties it all together.”

Leccia said the two blends have nothing in common with Debut, which never went on sale. “I started completely from scratch,” he said.

Leccia, who says he will be at the International Premium Cigar & Pipe Retailers tradeshow this summer, said he was excited to be back in the cigar business, and very happy the fight with Oliva was behind him. “I have nothing negative to say. It was a good time there. It’s nice to look back and have fond memories now.”