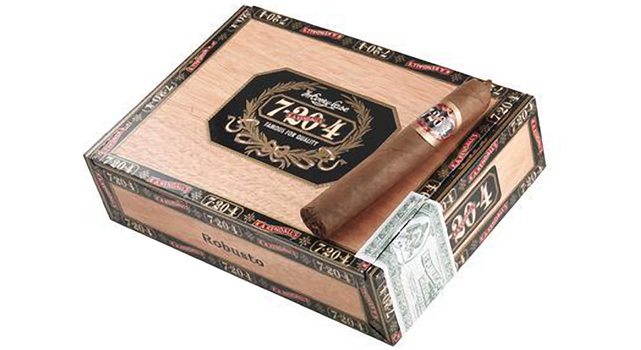 
This cigar was reviewed blind (no bands) by a panel of at least 4 reviewers. They did not know what they were smoking beforehand. The scores are an average of all the reviewers' scores with outliers removed. All of our cigars reviewed are shipped to the panelists with Boveda packs to ensure optimal smoking experience.

“Sweetness abounds from this stick, chocolate and tobacco.” –Ian (Sp@rky426)

“It is put together very well. You can see the seams of this wrapper (Colorado Maduro, maybe?) but they are smooth to the touch. When the pigtail was twisted, it pulled the cap up a bit and leads me to believe it will eventually peel off but shouldn’t affect the cigar whatsoever if it does.” –Milton (mjohnsoniii)

“The smoke started out pleasant and strong. Lots of cedar, pepper and vanilla right up front. After that, the flavors started to lean toward cedar until that was almost all I could perceive.” –Myles (MylesT)

“This starts out with quite a bit of spice along with notes of earth and wood. The finish is very long and earthy. A pretty straightforward and powerful start, but great flavors to it.” –Emmett (rhetorik)

“Definitely an improvement over the first third. Cedar is still front and center in this bad boy, but I can start to pick out things like vanilla and cinnamon now, as well as intermittent blasts of pepper. ” –Myles (MylesT)

“The creamy smoke is still billowing with the light gray ash still holding strong. To me, that is a definite sign of a well-rolled and constructed stogie. The flavors tasted now still encompasses black tea and has transitioned a bit with the addition of unsweetened chocolate and rich leather. The flavors combined, while very distinctive, has made this a pretty complex cigar that’s very enjoyable especially seeing that I’ve reached its sweet spot. I’m really enjoying it so far.” –Milton (mjohnsoniii)

“Cedar is, again, the primary here, although it’s starting to balance out a bit more now. The nicotine is starting to pick up toward the end, as is the spice. The cedar has finally given way to balance at the very end, and you can get a real taste of the other flavors that have been peeking through the whole time. ” –Myles (MylesT)

“This is where the cigar shines. I’m getting some floral notes, more earthy flavors, roasted pumpkin, a creamy finish. This third is smoother with less spice, and notes of cedar towards the end. The flavors here are really honed in and well balanced.” –Emmett (rhetorik)

“Perfect draw not too tight, not too lose, and never changed.” –Emmett (rhetorik)

“On a couple of occasions, it burned slightly uneven during the first half of the cigar but constantly evened out whenever it happened without any touch-ups. For the most part, the burn was perfect.” –Milton (mjohnsoniii)

“Overall this was a very good cigar, even with the draw issue and slight chemical flavor during the last third. There was some light wispy smoke and the wrapper unraveled a bit near the end.” –Craig (WyldKnyght)

“A bit too one noted (cedar) for my taste, but that could certainly be a function of the age of the stick, or where it lived in the box it was from. It also seemed to have a slight press on it, but only from top/bottom so it was slightly oblong. I would be willing to give this another shot, though, because the background flavors I was getting were very nice, and I’d like to see if they come forward next time.” –Myles (MylesT)

“This was a very solid smoke that I would love to try again. I think this could prove to be an excellent everyday go to cigar that you wouldn’t mind sitting back relaxing with or enjoying while doing outdoor chores. The only drawback I experienced was the fact that as it neared the end of the second third throughout its finish, it appeared to have changed into an entirely different profile. Other than that, this cigar was one that was highly enjoyable in my book.” –Milton (mjohnsoniii)

“This cigar had subtle flavor shifts, but always very balanced with good powerful notes. The wrapper was very dark but I never got any typical maduro flavors which is interesting. This was a great strong cigar, definitely for the seasoned cigar smoker.” –Emmett (rhetorik)

“Despite burn and draw issues and lack of complexity this cigar was a very enjoyable mild medium smoke for just over an hour. Would pick up a few and dry box for a while before trying again.” –Ian (Sp@rky426)