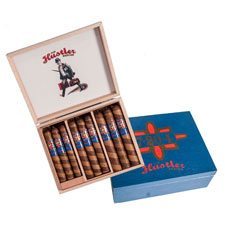 After a lengthy customer testing period, Kurt Kendall, owner of the 7-20-4 cigar brand, is set to debut his newest full-production cigars: Hustler and Spider.

The new cigars, both parejos, are being rolled by Nestor Plasencia at his factory in Danli, Honduras, Tabacos de Oriente. Kendall says the cigars contain no ligero, the strongest variety of tobacco.

Kendall, who owns and distributes his cigars under Vintage Cigar Distributors of New England, Inc., first debuted Spider and Hustler on a limited basis in order to receive customer feedback. Spider was first sent to a small number of cigar shops in New England starting in 2011, while Hustler debuted at last year’s IPCPR and underwent a similar trial run.

Hustler, which carries a suggested retail price of $10, sports a barber-pole style wrapper that combines Brazilian Mata Fina with Connecticut Shade tobacco grown in Ecuador. The bunch consists of a Costa Rican binder and filler tobacco from Honduras’s Jamastran Valley and Nicaragua’s Jalapa Valley. Kendall calls it a medium-bodied smoke, and it is being rolled in three sizes: 5 1/2 inches by 52 ring gauge, 6 1/2 by 58, and 6 by 54.

The 27-count boxes for Hustler are broken up into three compartments, with nine cigars of each size filling the spaces. Additionally, Kendall is offering Hustler in a five-pack in a 4 1/4 by 40 size he calls Dog Walker.

Spider, which begins shipping to stores next week, comes in only one size: 6 by 52. The cigar features a Honduran binder and filler tobacco also from the Jamastran Valley and the Jalapa Valley, as well as Columbia. Spider, which Kendall says is medium to full in body, will retail for the suggested price of $11 and come in 20-count boxes that feature a glass lid with an etched Spider logo.

Kendall, who is headquartered in Manchester, New Hampshire, is known for resurrecting a turn-of-the century brand called 7-20-4, a clear Havana produced by Roger G. Sullivan in Manchester from 1874 until the Cuban Embargo started in 1963. Kendall registered the dead 7-20-4 trademark and debuted the modern 7-20-4 line in April 2009, with Alec Bradley producing it in Honduras at Fabrica de Tabacos Raices Cubanas S. de R.L.

In April 2010, Cigar Insider conducted a vertical brand tasting of the 7-20-4 line in which it averaged 87 points, or “very good to excellent” on the semi-monthly publication’s 100-point scale. Since then, Cigar Aficionado has scored Kendall’s offshoot 7-20-4 1874 Series brand, too, with the Corona Especial size receiving the highest score, a 92-point rating.