Camacho cigars have been experimenting with barrel-aging for longer than most companies. Their latest iteration comes in the form of the Camacho Distillery Edition. This new line has three blends, Corojo, Ecuador, and Connecticut. Each takes their respective regular production blends and barrel-ages the corojo in the filler for six months. All three blends come in the same size, a 6 x 50 toro, and are priced at $9.25. All were shown off at the 2019 IPCPR trade show. 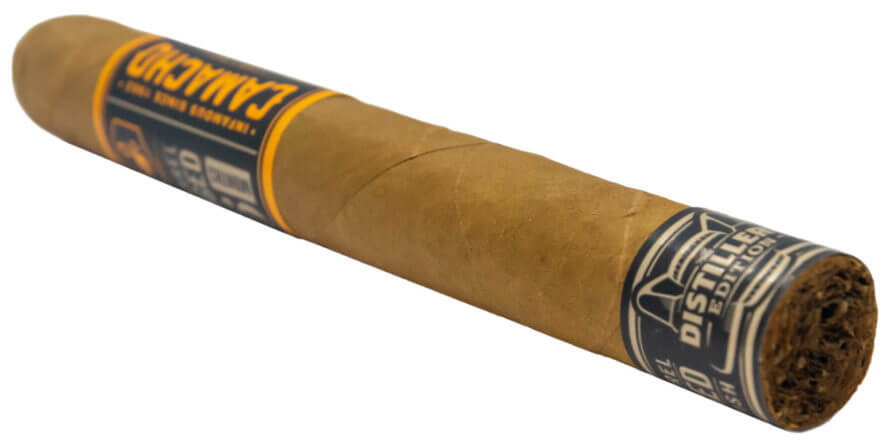 “There’s a really nice golden straw wrapper with a slight reddish hue. The seams are almost invisible, the cap is well applied in three stages, and the wrapper is just slightly oily to the touch. I do find a few small blemished around the wrapper and two odd chips but I don’t think it’ll affect the smoke.” –Alan (Eulogy)

“The first few puffs on this cigar give a strong note of grass and hay. Getting about a half inch in, a roasted peanut note emerges, along with a citrus zest note that has a long finish and really sits on the sides of the tongue. The retrohale has quite a bit of pepper in it along with a nice citrus zing. This combination is really warming up the palate, and is making for a very interesting smoking experience thus far. Draw is a little on the loose side, but still well within acceptable limits. Burn is pretty good, with only a slight wave to it, and the ash is tightly packed and light grey.” –Kevin A. (Kevin A.)

“There’s a lot of grassy notes right off the bat. Some subtle sweetness from the tobacco comes through with a baking spice and red pepper finish. The smoke output is very good but the cap is very spongy making it slightly uncomfortable to clench. I’m finding mostly heavy cream, leather, and an even spicier level of pepper on the retrohale.” –Alan (Eulogy)

“A little before the halfway marker, a very creamy element joins the cedar and coffee on the draw. The beautiful white ash is mesmerizing but that’s not necessarily a good thing when it plops off on your lap as your sitting there staring in awe of it. That’s my fault though, obviously, not the cigar’s.” –Matt Cade (CADE)

“I was thinking that this would be a pretty mild stick up it’s really ramped up in the level of spice and heat this third. There’s almost a burnt caramel like smokey sweetness and heavy cream that really makes an interesting note. I still find a lot of earthy, grassy notes but it’s an overall sweet and spicy profile. At the halfway point there’s sort of a big swing in flavors with more of a leather and graham cracker dominant profile.” –Alan (Eulogy)

“Getting into the final third, the roasted peanuts and sweetbread are the dominant flavors, now with the addition of a creamy caramel. Strength has held right in the medium range. The burn has remained solid all the way through, and the ash has remained a little flaky. Draw has not loosened up any farther, which is keeping the cigar from getting to hot and altering the flavor profile. As I am getting to the end of it, there is now an almost menthol like zing on the retrohale complimenting the black pepper, which moves the now medium finish to the tip and back of the tongue. The citrus has departed, and yet again the overall profile of the cigar has changed. It is finishing up very flavorful.” –Kevin A. (Kevin A.)

“Going into the final third the flavors again became more noticible, greatly so compared to the beginning. The grain flavors were still the driving note, as they had through the whole cigar, but now have been sweetened by a touch of honey. The wood flavors became slightly toasted or charred, and were especially noticeable in the retrohale.” –Isaac M. (The Nothing)

“With how spongy the cap was I thought the draw would be even looser than it is. I find very little resistance while smoking and had to be mindful of how hard I was drawing the entire time so I wouldn’t over heat the tobacco.” –Alan (Eulogy)

“From start to finish, this cigar burned evenly, and produced a good ash.” –Isaac M. (The Nothing)

“Construction is solid early on and it continues to impress through the duration of the smoking experience with a clear draw, straight burn line, and ample smoke production.” –Matt Cade (CADE)

“I was almost anticipating a mundane experience from the wrapper and predraw but was pleasantly surprised with how spicy and bold the flavors were. The construction was the only real drawback for me but what this cigar does right far outweighs that. If you like spicy, naturally sweet, and dynamic cigars this would be a great cigar to try.” –Alan (Eulogy)

“Starts out sweet then stay bitter throughout the smoking experience. The sulfur taste towards the end makes me put out the cigar. Not a cigar I would put in my humidor.” –Sean F. (fullermaine)

“Overall this was an enjoyable cigar. The strong grassines at the beginning may turn off some initially, but the transitions and changes throughout definitely will hit the high points for many aficionados out there. For sure, experienced smokers that like flavor over strength will enjoy it. The newer or casual smoker will not be intimidated and should be able to enjoy the cigar as well.” –Kevin A. (Kevin A.)

“This is an exquisite, refined cigar. Distinct, well-defined flavors all around accentuated by a crisp burn line and overall fantastic construction. As my good friend Tut occasionally says “I can feel the blender’s intent while smoking this cigar” and I would agree with him in this case. My gut says this is a very pricey cigar but, as my wife would happily tell you, I’ve been wrong many many times before…” –Matt Cade (CADE)

“This is a cigar that I feel like I might overlook on the shelf because “it’s probably not strong enough.” And it’s not, especially compared with my usual rotation. But you would be doing yourself wrong by passing it up. This cigar is solid. More than once I envisioned enjoying this cigar after waking next to a high mountain lake, watching the sunrise, and warming up next to a campfire with my coffee…. Yeah, I might have to make that happen.” –Isaac M. (The Nothing)

Blind Cigar Review: Camacho | Distillery Edition Connecticut Toro
Summary
"This is an exquisite, refined cigar. Distinct, well-defined flavors all around accentuated by a crisp burn line and overall fantastic construction. As my good friend Tut occasionally says “I can feel the blender’s intent while smoking this cigar” and I would agree with him in this case. My gut says this is a very pricey cigar but, as my wife would happily tell you, I’ve been wrong many many times before..." -Matt Cade (CADE)
Appearance
90
Aroma
88
First Third
89
Second Third
91
Final Third
91
Draw
91
Burn
93
Construction
92
Overall Experience
92
91
Overall Score - Very Good