O.S.O.K. stands for “One Shot One Kill,” which is the nickname photographer Edgar Hoill earned for his sniper-like knack for taking a picture at just the right moment, and in one attempt. This photographer turned cigar maker has been turning heads with some of the most unique cigars available today.

“Blind review 416 has a very hearty, sand paper like medium brown wrapper. The cigar feels well rolled with no soft spots and an uniform roll. The seams are tight and invisible. Head is finished off with a nice triple cap.” -Jiunn (jliu) 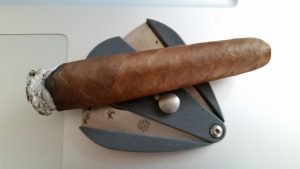 “First third’s flavor profile is one that is both balanced and nuanced. Notes of coffee, dried roasted nuts, dry biscuits, tannins as found in a big red such as a cabernet sauvignon or syrah, and slight black pepper spice. Through the retro hale, intensified (but welcoming) black pepper spice. Body and strength at a solid medium.” -Jiunn (jliu)

“The first initial puffs are very fruit forward. Almost a blackberry twang coupled in to the finish. The draw is really open and almost overpowering everything. As the stick gets going, a real nice black licorice takes hold as the profile front runner. Real nice going so far.” -Steve (ThaGreatWazoo) 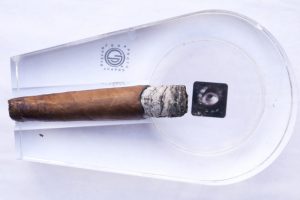 “Second third’s profile as hoped for, transitions into a more complex smoke. The core of the flavors are still there (coffee, dry roasted nuts, dry biscuits, big tannins). What changes is an increased level of black pepper spice and under ripe stone fruit characteristics. The under ripe stone fruit works very well especially with the coffee notes, almost reminiscent of a bright African coffee blend. Very nice! Body and strength continues to be at a solid medium.” -Jiunn (jliu)

“Still going strong with black licorice. The retrohale is inviting and gives just a subtle amount of white pepper. The burn is sufficient with a formidable amount of smoke coming off of the stick. The draw is still way to open and begins to hinder the smoke near the end of the second third.” -Steve (ThaGreatWazoo) 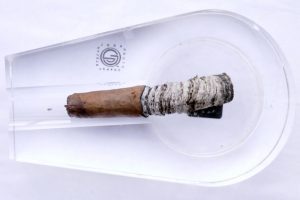 “No major changes in flavor during the last third other than perhaps a more pronounced emphasis on the white pepper.” -Stefan (Stefan)

“Last third’s flavor profile mirrors the second thirds less one note. Still great flavors of coffee, dry roasted nuts, dry biscuits, big tannins, under ripe stone fruits. The only difference is, as the cigars burns closer to the last two inches or so, a slight bitterness forms. The bitterness fortunately does not take away from the aforementioned flavors. Body and strength continues to be at a solid medium.” -Jiunn (jliu)

“Draw: Good, but did start to get tighter towards the end.” -Robert (NavyPiper)

“There was a really nice burn to the cigar. Ample amounts of smoke were coming off the ash and a nice clean white ash was holding well.” -Steve (ThaGreatWazoo)

“Given a good burn and a fair draw, overall construction was good. The important factor is the construction did not take away from the flavors of the cigar.” -Jiunn (jliu)

“A stogie whose main emphasis — without doubt — is pepper.” -Stefan (Stefan)

“Really enjoyed this cigar. The under ripe stone fruit and coffee characteristics was a treat and difficult to find in a cigar. Would definitely seek out up to a fiver of these.” -Jiunn (jliu)

“Overall, I truly enjoyed this cigar. It was a quicker smoke and had superb flavors coming through in the beginning. The second third started well, then faded slightly, but the overall was very pleasing. Fruit and black licorice are what you will find with this stick. So, if that interests you do yourself the favor of trying these out, you will not be disappointed.” -Steve (ThaGreatWazoo)

“Not a bad little stogie for a lunch break or something like that. I like peppery cigars so this was right up my alley.” -Robert (NavyPiper)