The Kristoff Shade Grown was called the Brittania Reserve when it released and later the name was re-branded. It is described by Kristoff as mild-medium bodied and represents the companies first Shade Grown Connecticut wrapper on a cigar. 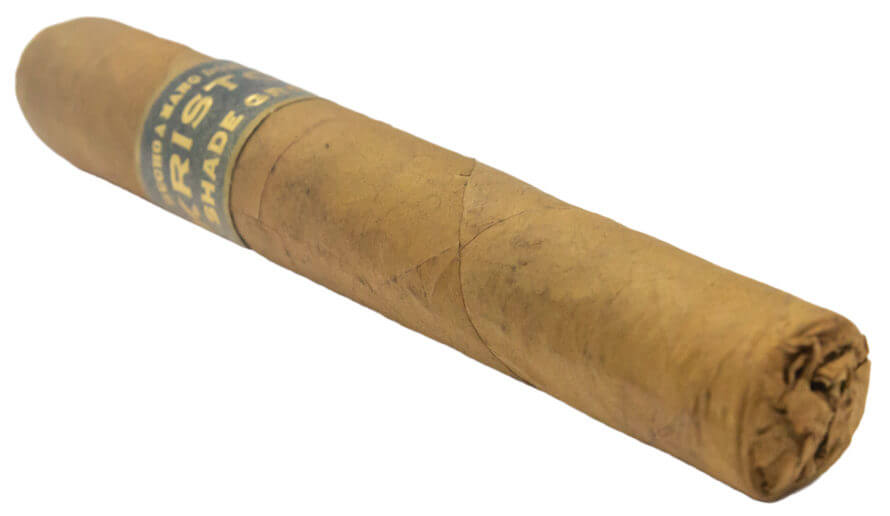 “There’s a lot of little touches that make it unique to behold. The shaggy foot is bunched closed but not firmly, I’m going to call it a man bun cap with a nice large triple cap, and the seams are almost invisible. The wrapper has a few blemishes and small chips but is largely well applied. I actually thought it was much lighter in color till I saw it in the light. It’s solidly medium dark brown in the light but looks almost like a Connecticut wrapper in the shade. ” –Alan (Eulogy)

“The aroma down the length of the cigar came across as dry earth, maybe a bit of cumin spice.” –Isaac M. (The Nothing)

“Till the shaggy foot burns off it’s all rich tobacco and mild pepper. Once it starts to hit the binder and filler the whole profile starts to round off. Very creamy smoke with an almost honey mouthfeel. There’s a bit of heavy cream and pepper on the retrohale but that’s the only place I’m really finding pepper. Roasted nuts, bread, leather, and cedar make up the majority of the profile. I’m occasionally getting hints of coffee and a floral note but they’re not together and not often. ” –Alan (Eulogy)

“Immediate notes of vanilla and cedar present themselves with some butter on the draw and white pepper on the retrohale. The draw is superb with just the right amount of smoke entering your mouth at any given time…” –Matt Cade (CADE)

“The nice cedar flavor is building and it’s going really well with the pepper on the nose. There’s also a touch of leather that joins the party and it plays nice with the woodsiness. ” –Matt Cade (CADE)

“The savory meatiness continues into the second third of the cigar that is joined by the cumin spice I noted before lighting. It’s like chili in a cigar, just missing a lot of cayenne. Cedar and white pepper can be found on the retrohale, which is significantly different than the first third. ” –Isaac M. (The Nothing)

“The flavors become a little bolder at the end. I think it’s due to the deep black tea flavor taking center

stage and having a more robust taste. I still find a pleasant nuttiness, cedar, leather, and bread note through the experience. The honey mouthfeel has never left and the smoke output remains phenomenal. ” –Alan (Eulogy)

“The final third begins and ends with the same leathery profile as the previous two. The draw remains perfect and the cigar is super smooth. The strength amps up just a little bit in the final third but does not get crazy. ” –Kevin A. (Kevin A.)

“While the wide open cold draw had me a bit worried, the draw turned out to be ideal throughout the smoking experience. ” –Matt Cade (CADE)

“It doesn’t get any better than this. No touch ups and a nice even burn, with a thin black burn ring and night tightly packed ash the whole way through.” –Kevin A. (Kevin A.)

“Overall the cigar’s construction was impressive with a nice draw and zero burn issues and no delights or touch-ups needed.” –Matt Cade (CADE)

“At first glance I thought it looked like the hipster of cigars. The man bun cap, slightly discolored wrapper, and shaggy foot all looked rustic but that man bun… Still, the flavors were excellent. I found a lot of dynamic change in the note from the profile. The smoke output was beyond great and the mouthfeel from the smoke was divine. ” –Alan (Eulogy)

“This cigar is classy all the way from its initial appearance, to the array of flavors presented, and the construction is top notch all the way. I look forward to smoking another one of these cigars, whatever they may be…” –Matt Cade (CADE)

“A lot of flavors in this stick. Sweet to spicy notes are well balanced. A beautiful grayish-black ash gives way to a tri-colored ash. I would include this stick in my humidor. A nice relaxing smoke that pairs well with a dark coffee and a rain storm. Pick up a few when you have the opportunity.” –Sean F. (fullermaine)

“While not typically a fan of one dimensional cigars, there are ones that deliver those flavors well, and this is one of them. Silky smooth from start to finish, starting with a smoky, leathery profile with a hint of pepper, and remaining very flavorful throughout. It would be hard to have transitional flavors in this cigar and keep it as good as it is. With the medium strength and body, this is a cigar I would not hesitate to give to anyone. I think with the very appealing flavor profile, those favoring full body/full flavor will find enjoyment in this cigar as well.” –Kevin A. (Kevin A.)

“I don’t think I can relay exactly what about this cigar had me happy. I certainly hated being away from it for long. I loved the thick texture and savory flavors. I didn’t even mind the cracked wrapper. I’ll be back for more.” –Isaac M. (The Nothing)

Blind Cigar Review: Kristoff | Shade Grown Robusto
Summary
"A lot of flavors in this stick. Sweet to spicy notes are well balanced. A beautiful grayish-black ash gives way to a tri-colored ash. I would include this stick in my humidor. A nice relaxing smoke that pairs well with a dark coffee and a rain storm. Pick up a few when you have the opportunity." -Sean F. (fullermaine)
Appearance
89
Aroma
89
First Third
90
Second Third
89
Final Third
91
Draw
93
Burn
93
Construction
90
Overall Experience
92
91
Very Good