Micallef Cigars added the Grande Bold line at the 2018 IPCPR trade show. Within this line, there are 5 new blends, Brazilian Mata Fina, Nicaraguan, Maduro, Sumatra, and Ligero. Prices in the line range from $5.50 to $11.00. The Micallef Grande Bold Ligero is the strongest in the line as the name would suggest. It is described as full-bodied. 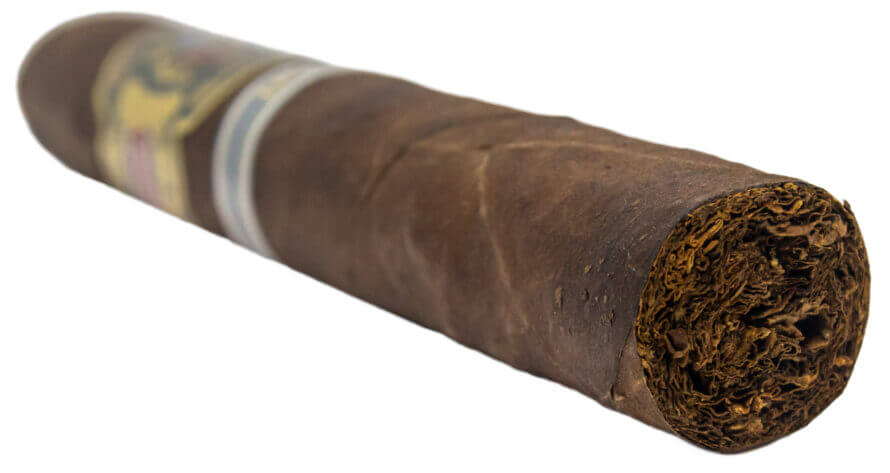 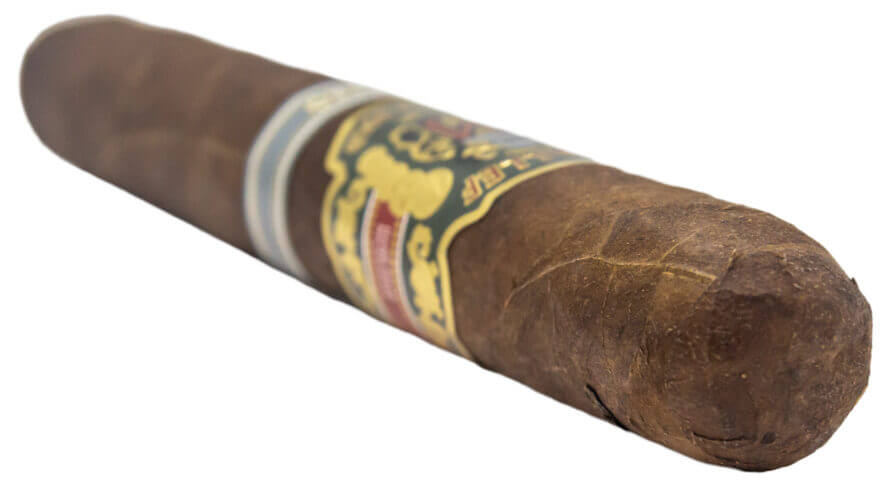 “This oily, mahogany colored cigar, was smooth to the touch. Tight, visible seams, traverse the entire length of this robusto grande. It is topped with a nicely applied double cap. It is a beauty.” –Estevan Z. (TheRealBanzi)

“The wrapper had a nice sweet cocoa smell along with a deeper dark chocolate scent on the foot. The cold draw didn’t give much flavor itself but left a lovely fruity sweetness on the lips.” –Lauren S. (Lauren S.)

“The first puffs gave that cocoa flavor that was smelt on the wrapper along with classic earth and leather flavors and hints of nuttiness like a cashew. As I got a bit further into the cocoa was very prominent and left a nice sweet aftertaste that was very appealing. The retrohale was not giving much at this point just a nice smokey warmth. The ash looked very much like shale rock and I expected it to fall any time but held surprisingly well for it’s look.” –Lauren S. (Lauren S.)

“The opening of this cigar had me thinking of Amaretto liqueur with an anise star dropped into it. Pushing some smoke through the nose and it is all anise. Smooth and soft with a nice medium length finish. It is very slow smoking with a very straight burn line. As the third comes to a close there is a nice floral and honey note. Sadly it is very short lived. I don’t want to call it bland, but it is very one dimensional.” –Estevan Z. (TheRealBanzi)

“The second portion of this cigar transitioned into a deeper and darker flavor profile. The smoke became more chewy and the leather flavors were replaced by a tangy charcoal and and earth note. Through the nose the smoke has become significantly stronger and leaves my sinuses tingling after every retrohale.” –Jason H. (Jokey Smurf)

“Smoking on there is more of the same. The only changes coming from the slight additions of cold brew espresso at the midway point. The retro has stayed true to itself with anise but muted when compared to the first third. It is really becoming a one trick pony. The finish has stayed medium in length with the burn line staying thin but it has become a little wavy.” –Estevan Z. (TheRealBanzi)

“As the cigar comes to a close we add some bready notes making me think of a almond muffin. This third had the most complexity in the whole cigar. A white peeper tingles the tip of the tongue and makes the mouth water. As we get into the last inch a cedar starts to creep into the background giving it some nice character. All in all it was a nice cigar worth the time invested.” –Estevan Z. (TheRealBanzi)

“The final portion has remained deep, dark, and chewy with charred wood and long lasting earth flavors. The finish is long, and leaves my palate feeling coated with a cloying slightly dirty after taste. It’s not unpleasant, but reminds me that I’m smoking a full bodied cigar. Surprisingly, given the strength of flavor, there is no noticeable nicotine kick.” –Jason H. (Jokey Smurf)

“This sample was slightly right on the draw but open enough to give me plenty of flavorful smoke. The smoke was somewhat thin though and was difficult to make a smoke ring, even in the total absence of a breeze.” –Jason H. (Jokey Smurf)

“The burn was never quite straight but it did consistently even itself back out without interference until the final third where it became a bit lopsided.” –Lauren S. (Lauren S.)

“This cigar was rolled beautifully and performed just as well. The ash was a nice white with some gray and darker spots. It felt great in the hand. Top notch from start to finish.” –Estevan Z. (TheRealBanzi)

“Another fine example of an enjoyable, full bodied cigar that had plenty of flavor and excellent performance. As I approached the nub I experienced a bit of the nicotine I expected to experience for the entire smoking experience. Not enough to make me light headed, it was there, and made for an enjoyable and relaxing end to a really nice cigar.” –Jason H. (Jokey Smurf)

“I really loved the first two thirds of this cigar. The flavor profile was right up my alley with the cocoa, earth and nuts. The slight hint of spice on the retrohale was just enough to mix it up without being overwhelming. The final third was a completely different experience though, that became much harsher and simply un-enjoyable. I will likely try another of these simply because of how nice the majority of it was and hope that my ending was a bit of an abnormality.” –Lauren S. (Lauren S.)

“Though this cigar was very one dimensional, in my opinion, it was well worth the investment of time. It would pair perfectly with an amaretto heavy cocktail or some fresh almond pastry. If you are a fan of medium body cigars with wonderful construction then this would be the cigar for you. Grab one and give it a shot.” –Estevan Z. (TheRealBanzi)

“I wish the wrapper aroma could have been the tasting notes instead of what I did pick up. The acid in the back of the throat was terrible along with the wrapper popping open with the VERY hot burn. ” –Allison T. (The Yoga Ash)

Blind Cigar Review: Micallef | Grande Bold Ligero 554L
Summary
"Though this cigar was very one dimensional, in my opinion, it was well worth the investment of time. It would pair perfectly with an amaretto heavy cocktail or some fresh almond pastry. If you are a fan of medium body cigars with wonderful construction then this would be the cigar for you. Grab one and give it a shot." -Estevan Z. (TheRealBanzi)
Appearance
91
Aroma
94
First Third
89
Second Third
89
Final Third
89
Draw
93
Burn
93
Construction
94
Overall Experience
93
92
Great