The Firecracker series comes from Two Guys Cigars as an annual release, each year with a different manufacturer. The first Firecrackers was made in 2007 by Don Pepin Garcia as a version of the Blue Label. It measures 3 x 50 and had a long pigtail cap that resembled a fuse. All other releases since then have kept this aesthetic. This years version in the series is the Perdomo Firecracker.

The Perdomo Firecracker measures 3 1/2 x 50 containing all Nicaraguan tobacco. The wrapper is the same as on the Perdomo 20th Anniversary Sungrown. Production for the Peredomo release is limited to 1,000 boxes of 20. 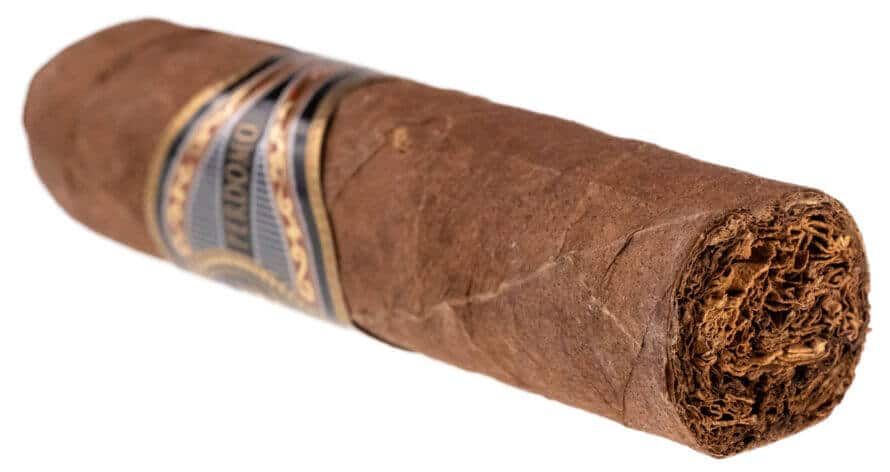 “This is a stout little cigar that is sporting a rugged deep brown wrapper leaf festooned with ample veins. The cap is finished with a ”fuse” that is nearly the length of the entire cigar and is tucked neatly against the body of the stick. ” –Jason H. (Jokey Smurf)

“Smelling the body of the cigar and you will find loads of cacao with some beautiful undertones of leather and barnyard. The foot adds some white pepper and more barnyard. Taking some pre-light draws you get heavy raisin and hay. All of this makes me really want to put fire to it.” –Estevan Z. (TheRealBanzi)

“The initial flavors on this sample are bold and full of spicy black pepper. On the finish the smoke carries hints of cinnamon and nutmeg. Through the nose the smoke is less bold and serves to enhance the baking spices that linger into the next puff.” –Jason H. (Jokey Smurf)

“Seeing g the little fuse makes me think this is going to be a spice bomb, we will see let’s get it lit. The finish is a little spicy but very manageable. Very interesting profile including honey and cocoa a more muddy earth. Floral notes joins the others. Profile getting darker and darker attributed to the cocoa note gaining steam.” –Ryan H. (Ryan H.)

“As we move into the second third, the retrohale has morphed into a fresh vanilla and mint. This lingers creating a long, wonderful finish. On the palate, the profile turns into more a fig and wild flowers that last for a long time. It is very slow burning to this point. This is a little unexpected cause of the size. As the third comes to a close I am met with a huge blast of honey sweetness. It just keeps getting better and better. ” –Estevan Z. (TheRealBanzi)

“Starting the second third the pepper is coming in and out with a short finish. I’m getting a charred oaky bourbon and slightly bitter tea. Strength is still on the lighter side of medium with some full flavors.” –Jonathan R. (J.Lee)

“Entering the final portion of this exciting little cigar I am greeted with yet another transition of both flavors and strength. The sweetness abruptly left and was followed by bitter cocoa and charred wood. This flavor profile is much more in your face, and leaves a lasting hint of acrid dry leather. Through the nose the smoke continues to be searing horseradish that doesn’t fade as before but instead lingers through the next puff.” –Jason H. (Jokey Smurf)

“All notes join forces for the last third bringing a singular note of espresso for the rest if the cigar. It may be little but it is truly amazing.” –Ryan H. (Ryan H.)

“I straight cut this cigar, as I do with all cigars I smoke, and it as close to perfect as you can find. This creates plenty of smoke with each and every draw. ” –Estevan Z. (TheRealBanzi)

“As my photos show, the burn on this sample was nearly razor sharp. I did choose to perform one touch up where the burn was slightly slower along the side of the cigar where the “fuse” was laying. ” –Jason H. (Jokey Smurf)

“This cigar was really very attractive and a little quirky with itse small size and long pig tail. The only blemish I can note is an abundance of glue where the fuse was tucked along the side.” –Jason H. (Jokey Smurf)

“This was a flavor bomb! Rich and bold from the time the fire touches it and grows fuller throughout the smoking experience. If this is what I think it is, this is exactly what it is blended to do. It was very slow burning for the size, which is quite amazing. I would say rush out and get as many as you can, especially if you are a fan of a slow burning flavor bomb, but if they are what I think they are that might be a little tough. Good luck and enjoy.” –Estevan Z. (TheRealBanzi)

“I really enjoyed this little fire plug of a cigar. There were plenty of flavor transitions and the flavors I got were quite good. I suspect the final portion was greatly influenced by increased heat as I approached the nub but the cigar remained enjoyable and is perfect for a short, full bodied cold weather smoke.” –Jason H. (Jokey Smurf)

“Overall it was a nice and quick smoke with punchy flavor. Oak, bourbon, caramel and espresso were some of the notes along with transitions of white pepper to begin and ending with a faint ever so slight red pepper on the tongue. I’d definitely buy a box to have around. ” –Jonathan R. (J.Lee)

Blind Cigar Review: Perdomo | Firecracker
Summary
"This was a flavor bomb! Rich and bold from the time the fire touches it and grows fuller throughout the smoking experience. If this is what I think it is, this is exactly what it is blended to do. It was very slow burning for the size, which is quite amazing. I would say rush out and get as many as you can, especially if you are a fan of a slow burning flavor bomb, but if they are what I think they are that might be a little tough. Good luck and enjoy." -Estevan Z. (TheRealBanzi)
Appearance
93
Aroma
92
First Third
91
Second Third
94
Final Third
94
Draw
97
Burn
96
Construction
94
Overall Experience
95
94
Excellent