Quai d’Orsay is a current Cuban brand that has been around since 1973. and commercially available from 1974. The brand was created for the French Economy and Finance minister (and later President) Valéry Giscard d’Estaing, who asked for a cigar with a light flavour to pair with French products like champagne and foie gras. This led to the French tobacco company (SEITA) collaborating with Cubatabaco on the project. The name comes from the street (and quay) in Paris where the headquarters of SEITA’s was located.

The brand overwent a refresh in 2017 with an updated look and new sizes including the No. 50. No. 50 come in boxes of 10 and 25. The cigars are described as light strength and are is comprised of tobacco from the premium Vuelta Abajo region. 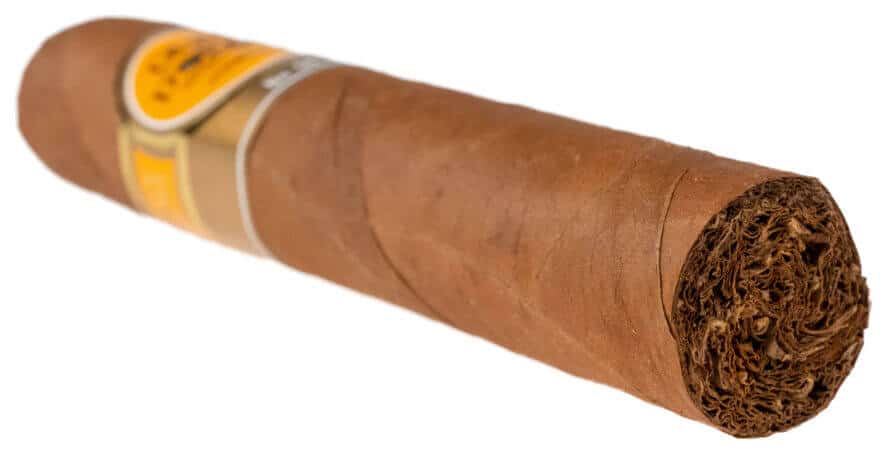 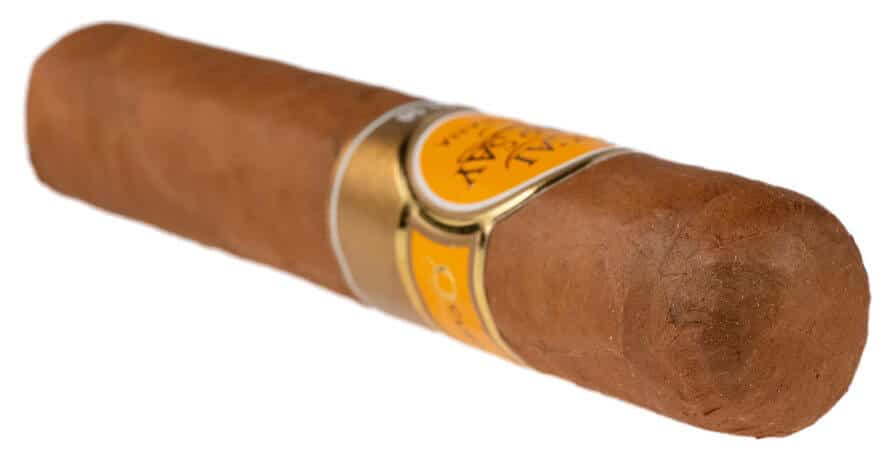 “First glances at this robusto are that it has a beautiful light brown colored wrapper with several veins present. Has a silky feel to it. Reminds me of the color of honey. Very eye catching.” –Kevin J. (maninblack77)

“After carefully toasting the foot so I don’t over do it, the first several puffs were full of citrus notes such as lemon and orange zest mixed with floral notes. It definitely reminds me of having the front door open during spring time and smelling all those aromas of flowering trees and fresh air. Very intoxicating. These notes held steady throughout the first third. What a tremendous start!! The burn was also very impressive. Ash held on for over an inch. Burn was very straight.” –Kevin J. (maninblack77)

“The cold draw reveals a sight mint and quite a bit of air… First impressions are that of crisp white pepper through the nose with cedar and a mild earthiness via the draw. So far the minor concerns that I had regarding the somewhat lumpy roll and the wide open cold draw have been proven to be just that – minor. The cigar is drawing and burning fine. At about the one inch mark a touch of mint arrives on the retrohale.” –Matt Cade (CadeTNCC)

“Getting into the second third, the sourness is gone, as are the cereal notes. The profile is now dominated by cedar, vanilla, and cinnamon, with a small amount of citrus that lingers on the tongue. The smoke is on the drier side, which may be due to having to take multiple puffs to get a good amount of smoke, causing the cigar to heat up. The retrohale is white pepper, with a little dry toast in the background. Burn is still fairly off, but seems to be correcting itself without and need for a touchup. The ash is dark and flaky.” –Kevin A. (Kevin A.)

“In the second third, the earth component on the draw picks up in strength a notch. That jump in strength works in the cigar’s favor as the bolder earth really jives well with the uptick in mint/pepper on the retrohale. Construction has been fine so far throughout the smoking experience with a strong ash and relatively straight burn line. I often read Halfwheel reviewers reference “pizza crust” in their reviews but dammit if I’m not getting some pizza crust from this cigar all of a sudden! That’s a first for me. I dump the ash around the 50 yard line.” –Matt Cade (CadeTNCC)

“The final third is where all the previous flavors came together to create an outstanding finish. Lots of lemon and orange zest mixed with a slight vanilla sweetness. It was hard for me to put down but alas the cigar was at its end. Outstanding from beginning to end.” –Kevin J. (maninblack77)

“In the final act, the mint through the nose becomes very heavily pronounced (it has grown steadily throughout the entire smoking experience) overshadowing the pepper almost completely. The draw is still primarily cedar and earth as the mythological pizza crust note has almost completely receded back in to the pizza box from whence it came…” –Matt Cade (CadeTNCC)

“No problems on the draw. After a few puffs the enjoyment begins!” –Sean F. (fullermaine) 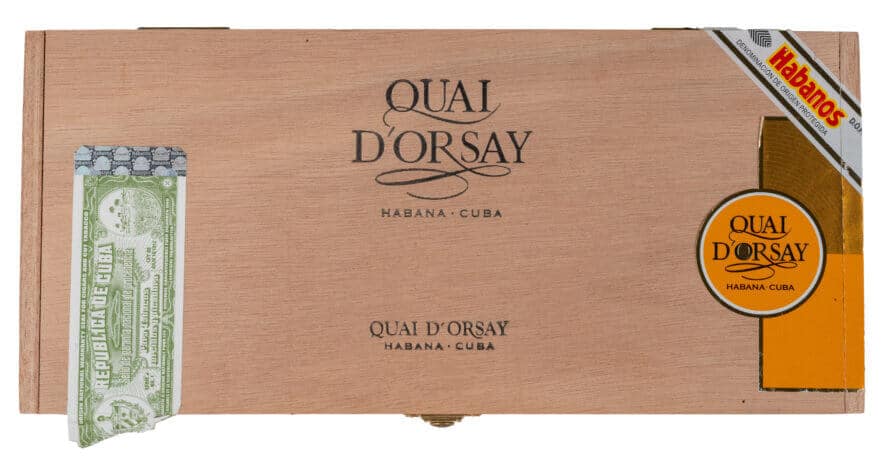 “Early concerns that I had prior to setting the cigar on fire proved to be mostly fruitless as the draw and overall construction were just fine throughout the smoking experience. The burn line did start to run on me at the very end of the final third but by then it wasn’t anything worth correcting…” –Matt Cade (CadeTNCC)

“A great stick to start or end your day with. Notes of wood, spice, and sweetness make this a nice relaxing smoke. If you’re looking for a quick smoke cigar, this would be a go to smoke.” –Sean F. (fullermaine)

“I normally shy away from medium bodied cigars but this definitely changed my mind. It held a wide array of flavors that truly worked well together. I would give this cigar an excellent rating. Definitely box worthy in my opinion. I would love to see how it pairs with a chai latte or cuban coffee. Excellent cigar.” –Kevin J. (maninblack77) 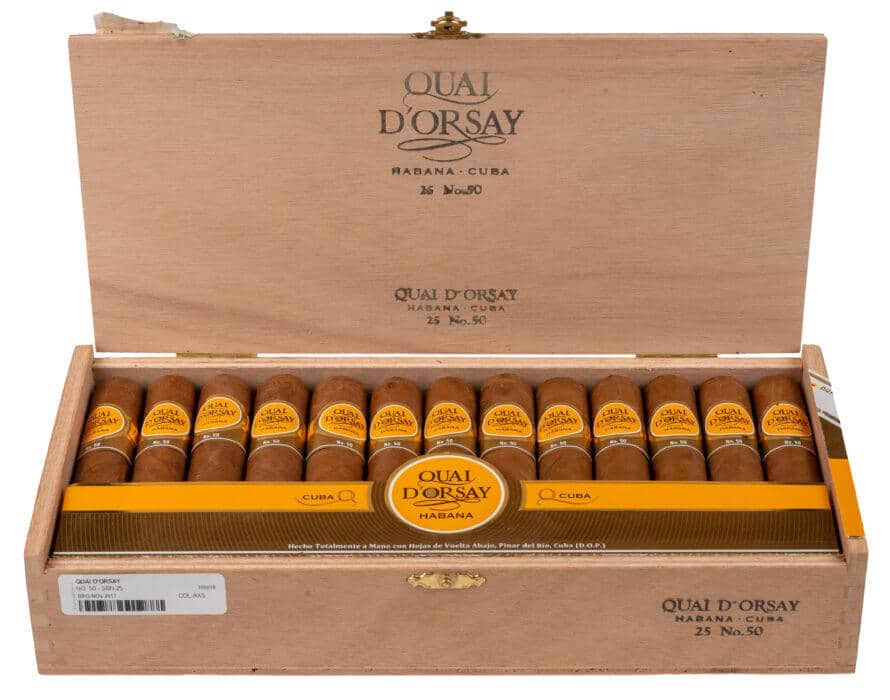 “This was an enjoyable, short smoke that packed some interesting flavor complexity in a quick smoking time of just 45 minutes.” –Matt Cade (CadeTNCC)

“This one was just not a hit for me. It will be interesting to see what others thought. The flavors were not in the wheelhouse of what I enjoy, and this is not a cigar I would reach for in my regular rotation or reach for again. Some may enjoy it, and that being said, it can be enjoyed by smokers of all experience levels.” –Kevin A. (Kevin A.)

Blind Cigar Review: Quai D’Orsay | No.50
Summary
"I normally shy away from medium bodied cigars but this definitely changed my mind. It held a wide array of flavors that truly worked well together. I would give this cigar a 95 rating. Definitely box worthy in my opinion. I would love to see how it pairs with a chai latte or cuban coffee. Excellent cigar. " -Kevin J. (maninblack77)
Appearance
93
Aroma
93
First Third
91
Second Third
94
Final Third
92
Draw
94
Burn
91
Construction
91
Overall Experience
92
92
Great