Tabaquería 1844 is based in Tamboril, Dominican Republic and is an up and coming boutique company. There is also a partner cigar lounge located in the coastal region of Cabarete, DR, named Casa de Tabaquería 1844. The initial release is a Dominican puro called Campesino Series. It is available in 2 parejo vitolas, Robusto Definitivo (5 x 52) and Buey Manso (6 x 54).

Campesino means Farmer, and was chosen to pay homage to the people of the Dominican Republic that play a huge role in every level of the tobacco process. Their logo depicts a drawing of a tobacco plant to pay further respect to their heritage. Lastly, their Factory, Tabaquería 1844, is named after the year in which the Dominican Republic won their independence from Haiti.

“This toro size cigar has a nice medium brown color. The Caramel hue is even, and the surface of the wrapper has a medium tooth. It is rolled well and seems heavy for the size.” –Matthew T. (A Huge Nerd)

“There was nothing over the top with the aroma, but there was no harshness or bitterness. A slight pepper was present, but the overall aroma was grass and wheat with a little anise finish.” -Steve (ThaGreatWazoo) 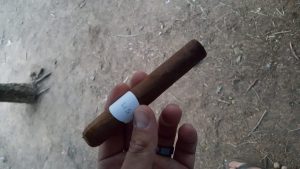 “The flavor profile starts with some harshness which dissipates after only a few draws. Mostly the flavors are roasted nuts, leather, and a bit of coffee. There also seems to be a dryness to the flavors.” –Matthew T. (A Huge Nerd) 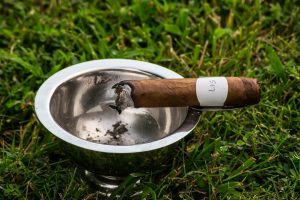 “The beginning third dominance has mellowed and become semi flat. The flavor profile hasn’t fluctuated to much and still stays creamy with a nut finish. Very decent cigar so far, there is just no real complexity.” -Steve (ThaGreatWazoo)

“The middle third had the same basic tobacco profile but now has some sweeter flavors of cocoa but surprisingly was not a good meld. The pepper is mellow in this third. No other major surprises and was mostly quite one dimensional in the flavor profile. No issues once again with the burn or draw.” -Sandeep (Djangos) 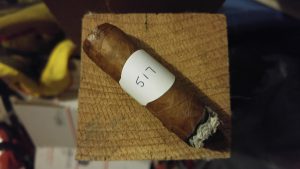 “An assortment of baking spices, cedar an anise are present. Again, not a bad flavor combination, just not very well balanced.” -Gregg (McGreggor57)

“The profile overall is very consistent. It’s a dry smoke that is not overly complex. In the final third I get more of the same, with the minor addition of hay and grass notes.” –Matthew T. (A Huge Nerd)

“The draw was open and consistent throughout. I never had to work to get smoke output from this cigar.” –Matthew T. (A Huge Nerd)

“A flaky ash and sketchy burn-line were a bit distracting. The smoke output, however, was very good.” -Gregg (McGreggor57)

“I give this cigar a fair rating based on the burn deficiencies. The overall build was decent with nothing overpowering or overwhelming. There were plenty of deep veins that ran the wrapper, so based on all of that I felt the cigar was lacking.” -Steve (ThaGreatWazoo)

“This was a decent cigar, which will increase or decrease based on your smoking activity at the time. I was camping, which gave this cigar a little more pizazz. However, the cigar was lacking in a few areas. Flavor-wise,the cigar started great, but tapered off quickly. Give this cigar some rest and it might mature a little, but do not expect anything mesmerizing.” -Steve (ThaGreatWazoo)

“The first third showed a lot of potential. The remaining two, however, were missing a richness to balance out the cedar and grassy profile. I became bored with this cigar about halfway through it. Maybe a good one to take to the golf course, depending on price point.” -Gregg (McGreggor57)

“In this experience, the cigar was good. Not memorable, just good. I can’t find anything glowing or scathing to write about it. While it was a good cigar, I can’t see myself remembering it a week from now.” –Matthew T. (A Huge Nerd)

“Over all an easy smoke with very one dimensional flavors. Will smoke again if I got one but may not go looking for one.” -Sandeep (Djangos)