In April of this year, United Cigar announced a new cigar with a very unique blend. The cigar would use only tobacco leaf stems in the filler, instead of traditional leaves. This cigar is called El Tallo, which translates to “The Stem”.

Most stems are removed from tobacco leaves before being put into a cigar, but sometimes they are left intentionally or unintentionally. The can change the flavor of a cigar. El Tallo comes in one vitola, a 6 x 50 Toro with a closed foot. The blend uses an Ecuadorian wrapper, Sumatra binder, and the following breakdown of tobacco leaf stems: 30 percent Dominican Republic (Cuban-Seed), 12 percent Dominican Republic (Olor), 12 percent Sumatra, 16 percent Nicaragua (Habano Estelí), 15 percent U.S.A. (Connecticut Broadleaf), 15 percent U.S.A. (Pennsylvania Broadleaf). The cigar is rolled at Jose Dominguez’s Tabacalera Magia Cubana factory and the project is said to have taken 5 years to come to the markets. MSRP is only $2.95 for each stick and only comes is 5-packs. 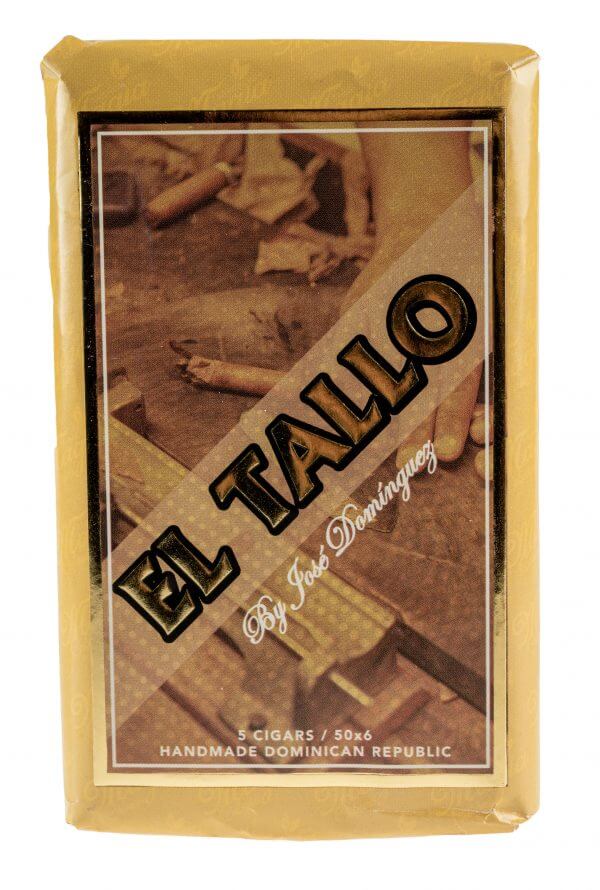 “The wrapper smelled of tobacco with a floral note. The foot had the same as the wrapper since it was a covered foot. The cold draw was delicious, vanilla cake. Yum!” –Matt H. (Mattehh)

“Right off the get go I’m met by that graham cracker sweetness I got from the foot. Lots of creamy nutmeg on the retro. Unfortunately this is overpowered by a strong ammonia flavor that I hope goes away quickly. Very funky and sour. Nearly had to put it down. Let’s see what the second third holds. ” –Kevin J. (maninblack77)

“Dry draw produced slightly musty sweet tobacco with a slight mineral quality. I like it. First light was pure BBQ char. As the cigar warms up, it reminds me of campfire smoke. Intense woodsy notes with brine, brown sugar and splice. Retrohale is smooth white pepper.” –James H.  (Keikan Jim)

“Into the second third the cigar construction started to show. The cigar began to really heat up. The pack seemed light and there were many voids. Ash was still flaky. I can describe this cigar as HOT. With all the bad construction the flavors were muted and faint. It was like smoking a basic cigar. ” –Matt H. (Mattehh)

“Unfortunately the ammonia decides to hang around. I fought thru it hoping it would dissipate down the line. Still the same graham cracker flavors on the back end. Burn line is a mess. Several touch ups were needed. Definitely not going as planned. Onto the final third. ” –Kevin J. (maninblack77)

“Last third and it is still not doing well. Got worse. Hot, bitter,

no real flavors other than smoke. Maybe every now and then would get some hardwood flavors. Put this out early.” –Matt H. (Mattehh)

“Well I fought it enough. Had to put it down with about an inch and a half left. The ammonia just wouldn’t go away. When my wife complains about the smell, I know it’s not a good thing. Very subpar and disappointing. Hopefully it was just a fluke. ” –Kevin J. (maninblack77)

“No real issues with the draw. Smooth with just the right amount of snugness. ” –Kevin J. (maninblack77)

“The closed foot didnt do this cigar any favors. Had to touch it up many times. ” –Kevin J. (maninblack77)

“The construction was terrible. Started great then went downhill. I pitched it at the end. Voids and a light pack were the culprit. ” –Matt H. (Mattehh)

“This short-filler abomination of a cigar disappointed me from the cut (at which point I discovered it was short filler) and continued to be an epic failure as I attempted to smoke it. The cray-loose draw from the poorly constructed loose filler tobacco resulted in an overly hot and uneven burn, and the taste was just simply acrid and foul. Bits of the short filler would crumble out into my mouth every time I would try to take a draw. Simply disgusting. I’ve never smoked a short filler cigar before, and I hope nobody else ever has to. I made it about 10 minutes before I had to call it quits on this cigar. No thank you…” – Nate H. (SineQuaNon)

“I truly enjoyed this one. It reminded me of a summer back yard BBQ. This Cigar would pair well with BBQ chicken and lightly peated Scotch whisky. Be prepared to invest a good part of the day as this a long smoke. I’d definitely smoke this one again.” –James H.  (Keikan Jim)

“I’m hoping this was a fluke because if not this would definitely be a cigar I’d avoid. I’d give it a 75. And that’s being generous. The ammonia flavor ruined the experience for me. Very sour and disappointing .” –Kevin J. (maninblack77)

“I am going to give this a fair rating cause the first third was so good. If the cigar stayed on that course it would have been a top cigar for me. Construction can really ruin the experience. ” –Matt H. (Mattehh)

Blind Cigar Review: United Cigar | El Tallo
Summary
"I am going to give this a fair rating cause the first third was so good. If the cigar stayed on that course it would have been a top cigar for me. Construction can really ruin the experience. " -Matt H. (Mattehh)
Appearance
91
Aroma
91
First Third
86
Second Third
88
Final Third
81
Draw
93
Burn
86
Construction
86
Overall Experience
81
86
Fair