Alec Bradley Cigar Co. announced today the addition of a 4 ½ X 60 size in the Magic Toast line named ‘Chunk’. This new size is a permanent addition. Magic Toast debused at the 2018 IPCPR trade show as mystery cigar with no information given until it was shown off, and only to attendees. The original sizes were Robusto, Toro and and Gordo. 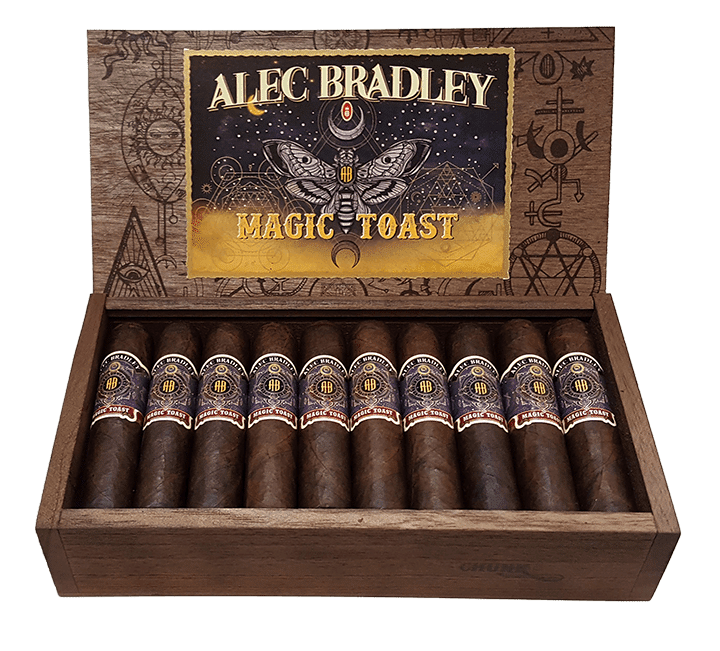 The story of Magic Toast goes back to when Alec Bradley founder, Alan Rubin, was taken to a new tobacco field immediately after arriving to Central America. At dusk, with help from pickup truck headlights, he saw the new crop and knew it was something special. A bottle of scotch was grabbed from the truck and a toast was proposed. Alan’s business partners referred to the crop as magical. Alan stuck with the concept and later named the cigars, featuring tobacco from that field, Magic Toast.

“Premium cigar enthusiasts really embraced the story of Magic Toast; after that, it was a must-try” said Director of Sales & Marketing, Jonathan Lipson. “The flavor profile is exquisite and the cigars are an unbelievable value. Adding a short 60 ring gauge cigar to the line will help expose more enthusiasts to Magic Toast and Alec Bradley as a whole.”

The Magic Toast blend uses a dark natural wrapper from Honduras, two binders one Nicaraguan and one Honduran, and fillers from Honduras and Nicaragua. The Chunk is rolled at the same factory as the rest of the line, Raices Cubanas in Danli, Honduras. A small number of boxes of the new vitola will show in October, with a global release in November. Magic Toast Chunk is sold in 20 count boxes and will sell for MSRP $9.25 per cigar.