Drew Estate is in the midst of expanding its already massive footprint in Estelí, Nicaragua. It’s constructing a state-of-the-art, pre-industry tobacco warehouse slated for completion by September. 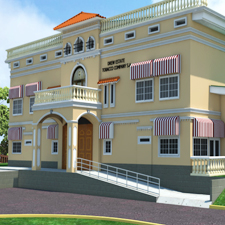 The new warehouse will be located directly across the street from La Gran Fabrica Drew Estate, the large factory the company uses to roll such premium brands as Liga Privada, Herrera Esteli, Undercrown and Chateau Real, as well as its infused line of Acid cigars.

Drew explained that the new warehouse, which is approximately 64,000 square-feet, will be used for tobacco classification and sorting as well as tobacco fermentation, tasks that are now being done off-site. The new building, in other words, will boost the level of control the company has over how it processes and handles its extensive tobacco reserves.

The modern facility will be two stories, with sorting and classification set to take place on the second story, fermentation on the first. Directly below the second-floor sorting area will be space for fermenting pilónes, racks for storing finished bales and space for a couple of ultra-modern humidification drums.

Nicholas Melillo, executive vice president of international operations for Drew Estate, says the humidification drums, currently in use by the Oliva Tobacco Co. in Estelí, reduces the amount of time needed to properly humidify a tobacco leaf, in addition to increasing consistency. Each wheel, which is about 15 feet tall, can hold up to 2,000 pounds of tobacco leaves.

IPCPR 2014: The Show in Pictures – ted’s, Torano, Veritas and Viaje