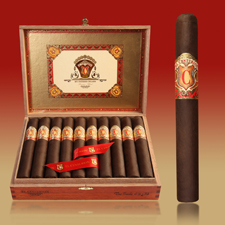 El Centurion is shipping to cigar stores. The cigar is made in Nicaragua by the Garcia family, owners of My Father Cigars, and the smoke is being released as part of a 10-year anniversary celebration commemorating when family patriarch José “Pepin” Garcia began rolling cigars in the United States.

The cigars, which we wrote about in March, are a new incarnation of a previously limited-edition smoke that first came out in 2007.

El Centurion has a new blend, a new look and lower prices than the original version. The cigars are made from an all-Nicaraguan blend that has four seed varietals: Criollo, Corojo Habano, Sancti Spiritus and Criollo ’98.