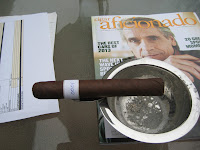 “The construction on this stick is very good complete with a beautiful triple cap. There are a few medium visible outer veins, and a few large veins underneath. It feels very well packed and absolutely no soft spots. I’m picking up a lot of sweet smells from the foot, chocolate and caramel.” -Emmett (rhetorik) “Good construction. with an effortless draw. Slight uneven burn but not a problem.” -Nicholas (volpow61)

“Dominant cedar with a little leather with hints of red pepper. and molasses. Very enjoyable, but not too complex” -Emmett (rhetorik)

“Still mostly plain tobacco, but again cocoa came in & out, and towards last part of this third, began getting hints of honey.” -Robert (NavyPiper) 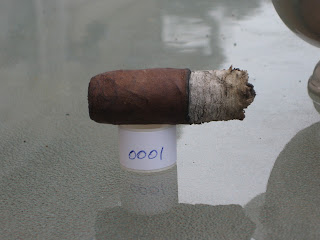 “This was definitely the best third of the cigar, I wish the rest had been like this. Along with the cedar I’m getting some caramel and pepper spice. It did get bitter at the nub.” -Emmett (rhetorik)

“Spice picks up a little along with sourness mixed with a little sweetness with a bitterness.” -Nicholas (volpow61)

“Not much complexity, plain tobacco was primary, with some honey and a nuttiness.” -Robert (NavyPiper)

“Cigar just didn’t seem ready to smoke.  If I had a box of these, I wouldn’t try another for a year.” -Jason (bigslowrock)

“I would put this in the category of a decent value cigar if the price is right. Overall it was pretty enjoyable but one-dimensional, I liked how the strength increased throughout, but it did get quite hot and bitter at the end.” -Emmett (rhetorik)