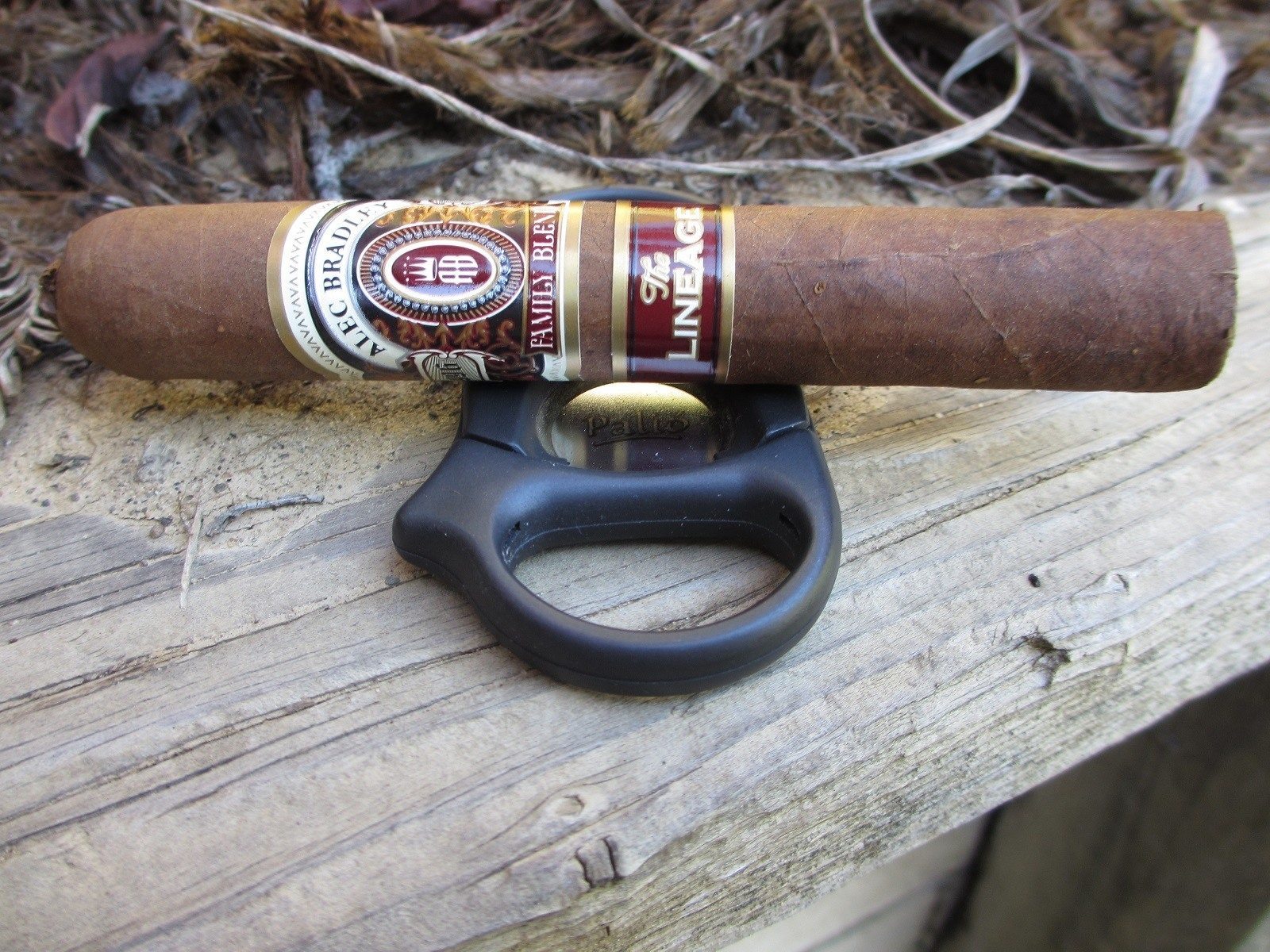 The Alec Bradley Family Blend The Lineage line was made to commemorate company president Alan Rubin’s sons, Alec & Bradley, who became of legal smoking age in 2014. The Lineage Robusto is 5 1/4×52 and carries an MSRP of $6.75 per cigar.

A medium tannish brown wrapper. There are a few water spots and some thin veins visible. The seams are barely noticeable and very smooth. The cap is tight pigtail. The wrapper has a very interesting smell that I can’t really place. At the very first sniff I wanted to say it was a fishy smell, but I’m not sure that’s it. From the foot I get tobacco sweetness with maybe a little cinnamon.

The pre-light draw brings a little bit of raisin sweetness. The smoke starts out with a creamy woodiness along with some spice added in on the retrohale. As the third progresses, a bit of meatiness joins in to go along with the woodiness and cream. For about a quarter inch, when taking regulars draws, I’m not getting a lot of smoke and have to take a couple in a row to get normal smoke production. After that, smoke production went back to normal. I would put both the body and strength at medium.

The nice underlying meatiness continued here in the second third which was very welcomed. About half an inch into the third, the cigar went out on me. After the re-light, the meatiness has gone away and a spicy cedar has taken over while the creaminess remains. The cigar went out a second time and required another re-light. The strength has toned down a bit and the cedar spiciness has also receded some. The woodiness transitions to oak with the creaminess ramping up. I would say that the body and strength have both dropped a bit.

The final third brings with it a distinct flavor change of graham cracker without the sweetness. There is still a bit of spice on the retrohale, but it is very smooth. In the second half of this third, a mild mintiness has made its way into the profile. The mint and creaminess continued until the end. Body and strength bot ramped back up to medium.

The draw was a bit firmer than I prefer but nothing that negatively affected the experience. The burn was a bit wavy and the cigar went out a couple of times in the middle third. The cigar was firm throughout. Not sure what caused the lack of smoke production in the first third and the cigar to go out, but there was some sort of construction issue to attribute that to.

The flavors were pretty good. There were a couple of transitions that kept things interesting as well. The smoke production issues and the couple of times that the cigar went out were a little disappointing and took away from the overall experience. Having to work to keep things going is not something that I want to deal with as I just want to concentrate on the flavors. I hope that this experience isn’t indicative of other cigars of this line or vitola. I would definitely be up for smoking another one of these to see if there no construction issues and I can see if that effects the flavor transitions. Overall, with a body and strength of medium, there should be a wide range of people that would find this cigar something they could enjoy.

The cigar lasted 2 hours and 10 minutes for me.

I would give the Alec Bradley Family Blend The Lineage Robusto a personal score of 86.