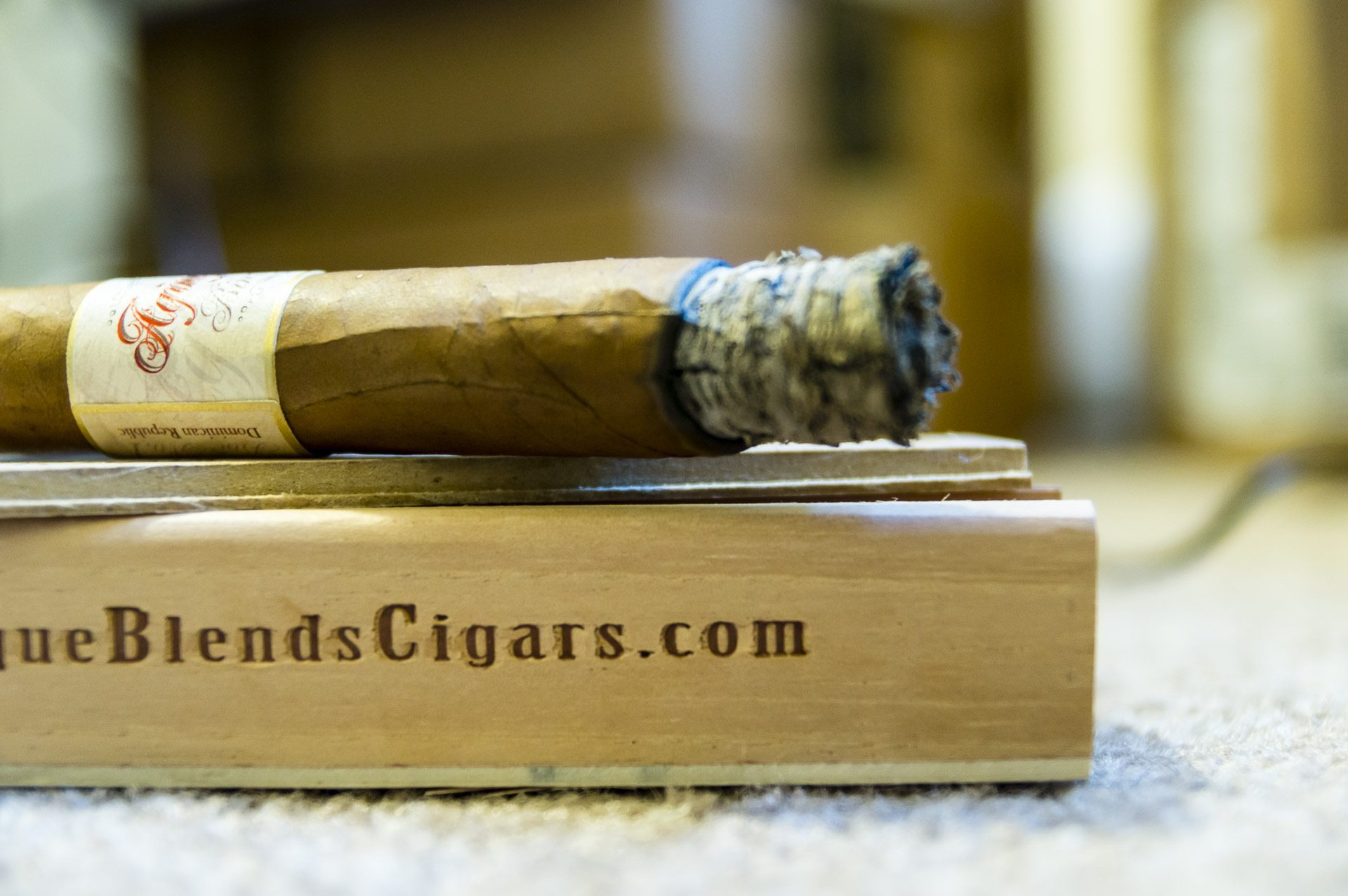 The Aging Room Bin No. 1 is rolled at Tabacalera La Palma. Its conception lies in superbly aged tobaccos dating back to 1999 and 2001 that have been preserved from the legendary growing region of the Cibao Valley in the Dominican Republic. It has an Ecuadorian Habano wrapper. There are three sizes being released, a 6 1/8 x 52 B Minor, 5 1/4 x 54 C Major and a 6 1/4 x 63 G Major, with the names continuing Aging Room’s trend of using musical terms in their names. Boutique blends says that  there’s actually a spot in the factory called Bin #1, where Cuban-seed Dominican tobaccos have been resting for over 15 years.

This cigar just looks magnificent. It’s wrapper is silky smooth with no visible seams and almost no veins. The smell is that which only comes with well aged tobacco, and something I usually only pick up on from Cubans and a few super-premium non-cubans. The pre-light draw is sweet like caramel.

The first few puffs I get some nice medium black pepper and that same sweetness as the first third. Further in, this cigar is so smooth and buttery, I can’t even believe how tasty it is. The draw is a bit snug, more what you would expect on most Cubans, but no problem. At the end of this third the draw has opened up a bit and the flavors continue to be fantastic, still getting a buttery sweetness just the right amount of pepper, and a bit of anise now. To say I’m enjoying this would be an understatement. I hope the rest of the cigar lives up to this one, this could end up being a legendary cigar.

The second third is shaping up to be as tasty as the first, I’m still getting a lot of that aged tobacco flavor with it’s butteriness. The strength is around a medium-full. There is still some pepper, but more mild, and the anise is present. Now I’m getting a fantastic fresh-baked bread flavor mixed in with the butter and hint of pepper still around.

This third has picked up in strength and complexity. Some woody notes have emerged and mix well with the pepper and buttery bread flavors. The spice picks up again and continue throughout. The anise makes another appearance towards the end. This would pair great with a full bodied dark beer like a milk stout.

This was by far my favorite new cigar from IPCPR this year and one of my favorites overall this year. This was so smooth and buttery and the flavors were always balanced and great. It had just the right amount of spice throughout. The flavor profile and aged tobacco flavors I found are usually unique to Cuban cigars. It was full flavored and complex with lots of transitions without being overly powerful. The price is a bit steep, but I will be buying a box of these, no question. I give this a personal score of 96 (Extraordinary).