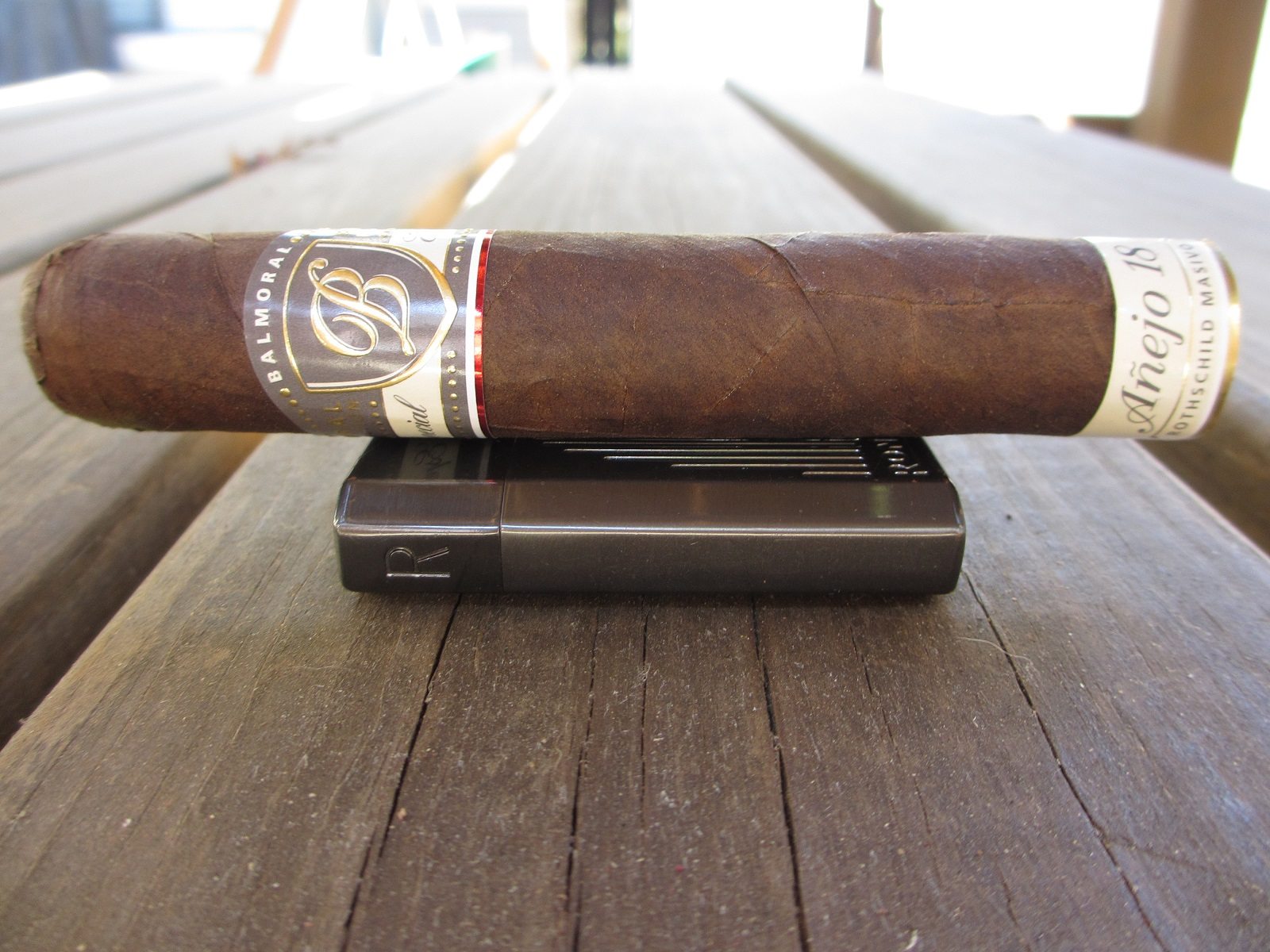 *Note: This is not a blind review, this is just to give a quick take on a cigar that was provided to us by the distributor.

Balmoral is a brand that is well known in Europe. Earlier this year, Royal Agio Cigars, the parent company that owns the Balmoral brand, entered into an agreement with Drew Estate who will be handling the distribution of their brands in the United States.

The Royal Selection Anejo 18 Rothschild Masivo measures in at 5×55 and carries an MSRP of $12.00 per cigar. The wrapper is Brazilian Arapiraca Maduro with a binder of Dominican Olor and a filler consisting of Brazilian Bahia, Dominican Olor, and Nicaraguan Ligero.

The wrapper has a dark brown color that fits right in between a milk chocolate and dark chocolate color. It looks fairly rugged with some visible veins and wrinkles. The seams are slightly raised and it appears that there is only a single cap that also has raised edges. The aroma from the wrapper is a faint barnyard smell. From the foot, I get tobacco sweetness.

The tobacco sweetness from the filler aroma is also present on the pre-light draw. The first few draws are bringing flavors of woodiness and cocoa. A little bit of spiciness on the tongue, but none really present on the retrohale. At about a half inch in, some of the spiciness does makes its way into the retrohale. The cocoa has faded away and I am left with a light oak and some spice. As the third went along, the spiciness increased in a very slight amount. The ash dropped right at the end of the first third. The body is medium-full while strength is medium.

In the second third, there really haven’t been any significant transitions. The oak woodiness is still the primary flavor with a little spiciness. The cocoa from the first third seems to poke back in every few puffs though. Throughout the remainder of the third, the flavors stayed the same. Again, the ash held on for the entire third. I would say that the body stayed at medium-full and the strength remained at medium.

In the final third, the oak starts to pick up a bit of char and the spice fades back a little bit. At about the middle of the third, a meatiness is now present to go along with the charred oak flavor. The meatiness continued until the end and the cigar never got too hot to smoke all the way to the nub. I would say that the strength picked up a bit to medium full at the end and the body remained medium-full along with the previous thirds.

The draw was excellent. Just about the perfect resistance that I prefer and I got lots of flavorful smoke on each draw. The burn was also excellent. There were some very small parts that went off of a straight line, but it caught back up quickly and always stayed on line. The cigar was fairly firm, with a slight softness in the middle and a little more softness right at the foot. The ash held on for each third, so it only dropped twice. Very impressive construction.

I guess the only complaint that I have against the cigar is the lack of flavor transitions over the first two thirds. The flavor that was present was good and there was lots of it. If you like an oaky woodiness with a bit of spice, then this would be a perfect match. The performance of this cigar was top notch. I had to pay no attention to the burn or tapping of the ash. With the strength of medium and the flavors that it offered, I would consider this a good middle of the day cigar or maybe the second cigar of the day if you are planning to smoke more than one.

The cigar lasted 2 hours and 15 minutes for me.

I would give the Balmoral Royal Selection Anejo 18 Rothschild Masivo a personal score of 90.