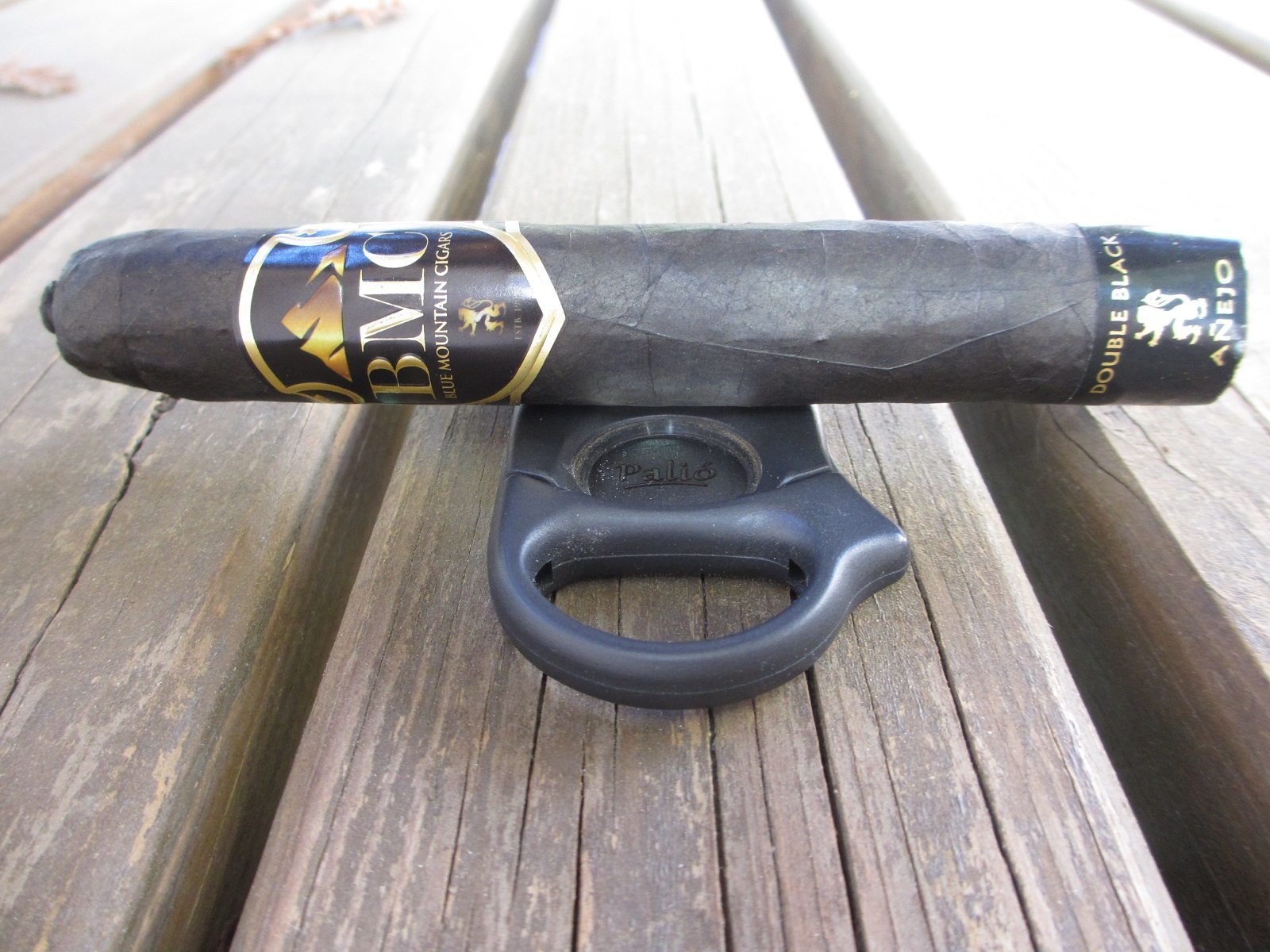 The Double Black Añejo from Blue Mountain Cigars measures in at 6”x54 and carries an MSRP of $8.00. The cigar has a Brazilian Maduro wrapper.

The wrapper is very dark. You can see a slight brown in the light, but otherwise, some may say the wrapper is black. There are some visible veins. The wrapper seams are very hard to see. You really need to look closely to find them. The cap has a nice tight pigtail which adds to the presentation. The cigar is a little misshapen as I see some “dents” along the length. From the wrapper I get a light barnyard aroma. From the foot I get a fair amount of sweetness, which reminds me of a cherry sweetness.

On the pre-light draw, I get some of that cherry sweetness along with some spice on my lips. After lighting up, the initial draws bring some heavy cedar in the mouth and on the retrohale. At about a half inch in, a smooth pepper blends in with the cedar on the retrohale. A bit of underlying sweetness starts to make an appearance. The cedar with the underlying sweetness along with the cedar and smooth pepper continue on for the remainder of the third. The body is medium–full and the strength is also medium-full.

In the final third, the charred oak flavor continues. The retrohale is creamy with a slight pepper. The strength seems to be picking up here as the cigar goes along. At about the midway point of the third, the charred oak now transitions back to cedar. As the cigar reaches the end, quite a bit of creaminess has come in to mix with the cedar and brings a bit of sting to my lips. The sting went away after a few draws and the creamy cedar remained. The body remained at medium-full and the strength ramped up to full.

The draw was pretty easy. With the larger ring gauge of this cigar, a mix of an easy draw is not my preference. I find it hard to manage the amount of smoke I bring in on the draw and prefer a tighter draw so that I can get better feedback from the cigar. The burn was pretty wavy and went off a few times requiring multiple touch-ups. There were a couple soft spots near the head and middle of the cigar. From the midway point of the cigar down to the foot, the cigar is very firm. The wrapper was pretty fragile as it cracked a few times, especially near the head and began to peel, so I needed to tear off some pieces as it was a bit awkward to continue to take draws with pieces of wrapper hanging off.

This cigar was just ok. The flavors were good along with some good transitions. The performance left something to be desired. The easy draw and burn issues required a fair amount of attention which takes away from the overall enjoyment of the cigar. One of the primary features of this cigar touted by Blue Mountain is that this is one of their strongest cigars. What I found surprising is that there was a good amount of flavor to go along with it which made it not all about strength. If the draw and burn were improved, this could be a pretty nice cigar. Due to the strength and size of this cigar, I would not recommend it for beginners. I would say that this is for the more experienced cigar smoker and more of an evening or final cigar of the day. If a good amount of nicotine has an adverse effect on you I would recommend having a sweet drink or whatever other nicotine fighting solution you have nearby.

The cigar lasted 3 hours and 15 minutes for me.

I would give the Blue Mountain Cigars Double Black Anejo a personal score of 85.
–