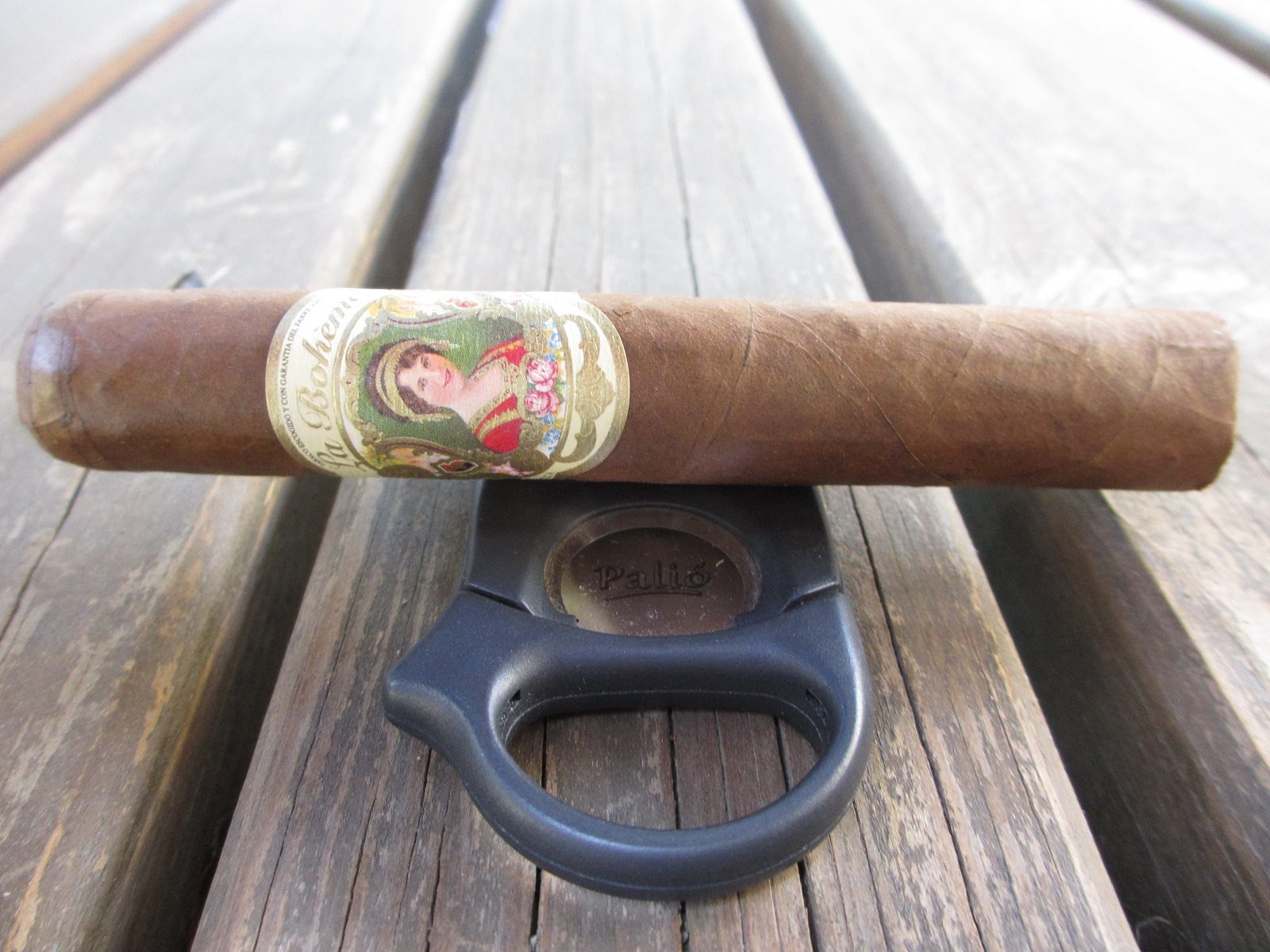 The La Bohéme is a cigar from Boutique Blends and was released in the second half of 2014. Rafael Nodal describe the concept behind the cigar as “Uniting my 3 life passions, my love for Music, my love for Cuba and my love for Cigars.” The cigar has an Ecuadorian Habano wrapper with Dominican binder and filler. The Pittore vitola measures in at 5 1/8”x52 and carries an MSRP of $11.94.

The wrapper is what I would consider a dark tan color. There are some prominent veins running along one of the sides, but other than that, the veins are fairly small. The seams are visible but tight and the caps are neatly applied. The wrapper smells of very light sweet hay, while the foot has a slightly sweeter tobacco aroma to it.

The pre-light draw brings some spice to the lips and tongue along with the aroma of hay. Upon lighting, the initial puffs bring some bready flavors along with some pepper. At a quarter inch in, the bready flavors have faded and given way to a mild cedar along with the continued pepper that maintains a long finish. The retrohale is slightly creamy. At about the inch mark, the retrohale really picks up on the pepper although there is still some cream in the background. A little past the inch mark and the cream is making its way into the flavor in the mouth along with the pepper finish. This flavor along with the peppery retrohale is making for quite a nice combination. Nearing the end of the third, the pepper tones down a bit and creamy cedar is the primary flavor. As the third wraps up, the pepper has almost completely gone away except for a little on the retrohale. It is now primarily creamy cedar with a little kick. The body and strength are bot medium-full.

As the second third starts, the pepper picks back up. There is also a bit of sweetness that has joined in. A half inch in and the pepper fades away again. The cedar picks up in spice on the retrohale. There is still some sweetness that hits right in the middle of my tongue. Halfway into the third, a mineral flavor comes in to mix with the cedar. The cedar has lost the spiciness on the retrohale. Nearing the end of the third, the mineral flavor is now making its way into the retrohale. The body and strength have both dropped down to medium.

As the final third starts, the mineral flavor remains, but has left the retrohale which is now primarily creamy. The mineral flavor is becoming fuller which is a nice experience. The retrohale has added the cedar again to mix with the cream. Halfway through the third, the body is increasing with lots of dense flavorful smoke. The cigar wrapped up with the mineral flavor fading back a bit and the creamy cedar taking over. The body and strength both ramped back up to medium-full.

The draw was a little tighter than I prefer, but nothing too out of the ordinary. The burn was very good. It never went offline and always stayed close to being straight. The cigar is firm the entire length and feels heavy in the hand. No construction issues during the smoke as it didn’t require any attention.

This was a very nice cigar. There were a core set of flavors that made many transitions throughout. Lots of pepper in the initial third along with cedar and cream. Some sweetness went in and out and the mineral flavor that showed up in the second half of the cigar was a welcome addition. The performance was fantastic and allowed me to just focus on the flavors. A good amount of strength along with the fuller body would make me recommend this as an evening cigar after a meal or as a second or later cigar in the day.

The cigar lasted 2 hours and 45 minutes for me.

I would give the Boutique Blends La Bohéme Pittore a personal score of 91.
–