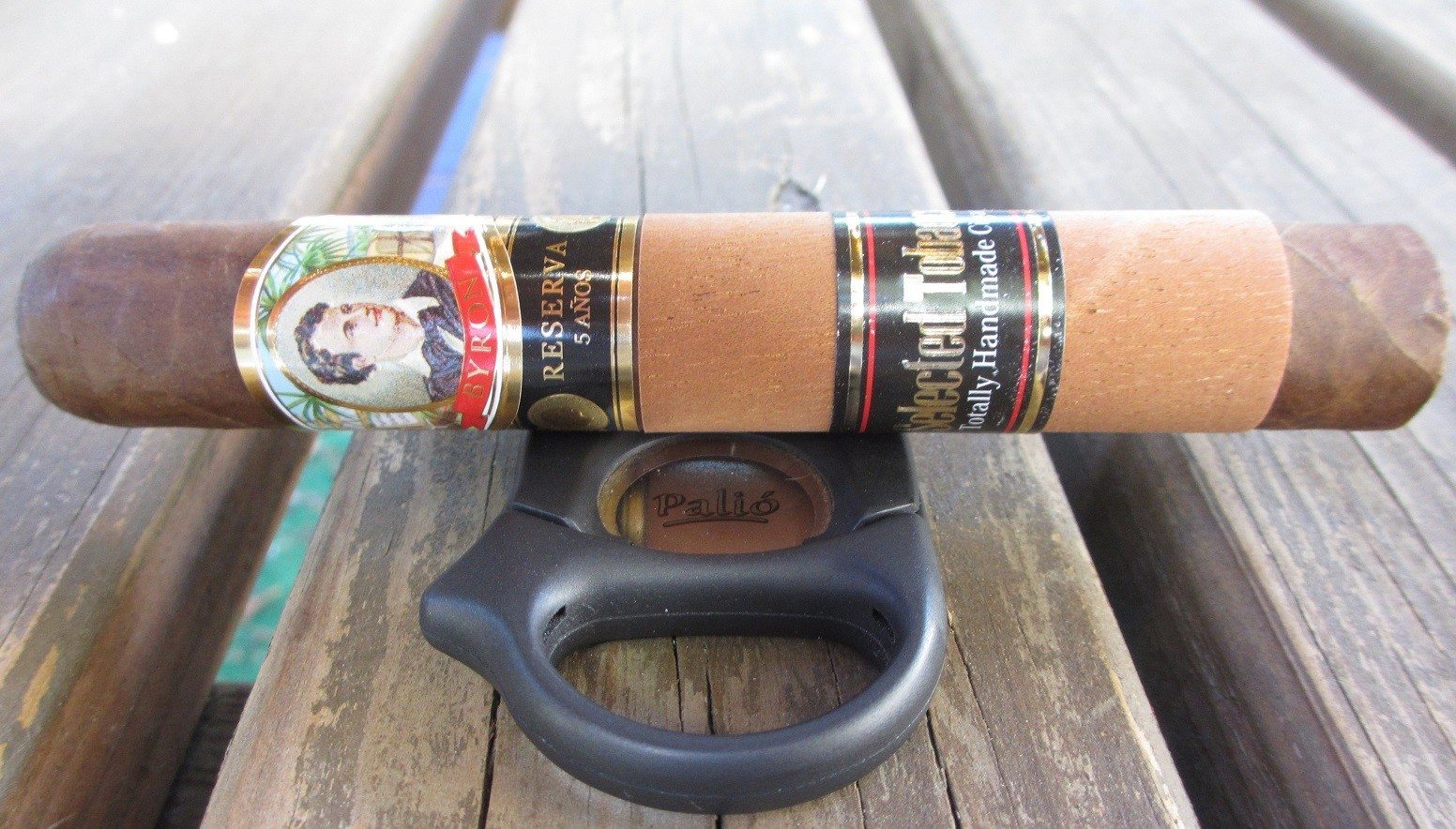 Byron is a brand from Selected Tobacco Company. It was created by Nelson Alfonso who is a graphic designer that is behind designs for all of the major Cuban brands including the famed Behike. The cigar comes from Costa Rica and the Londinenses vitola is 5.5” x 54. Blend information is undisclosed which is common for all of the brands released by Alfonso.

This cigar was provided to me by David Garofalo of United Cigar retailers which is a group of 33 retailers which has had exclusive distribution of the Selected Tobacco brands in the United States thus far. Distribution was opened up to more retailers during the IPCPR 2014 trade show in July. The MSRP for the Byron Reserva 5 Años Londinenses is $29.99.

The first thing that you will notice is the tube that the cigar comes in. It is a humidity tube which can carry its own moisture so that when you travel with the cigar it maintains correct humidity. It’s also not the standard aluminum tubo as it has a plastic section which allows you to see the cigar. A very nice presentation of the cigar for sure. The cigar itself is a nice medium dull brown. There are a mix of medium and fine veins and the wrapper color is lighter along the veins which gives the wrapper a turtle shell appearance. The seams are slightly raised and visible. The caps are very neatly applied. I get a light hay aroma from the wrapper and a fairly strong sweet tobacco from the foot.

The pre-light draw brought the sweet tobacco that I got from the aroma of the foot. Upon light up, I am greeted with lots of thick smoke which brings flavors of very spicy cedar. After about a half of an inch, the spiciness has subsided some although it does linger on my tongue. The retrohale is also cedar with a hint of coffee. An inch in and things have really smoothed out. No spice on the initial draw or the retrohale, but just a bit of spice that seems to come through on the tongue after releasing all of the smoke. The ash dropped just about an eighth of an inch before the end of the third. I would put both the body and strength both at medium-full.

As the second third starts, the cedar has transitioned to a bit of charred oak. The retrohale now has some medium pepper which really tingles my nose. About a half inch in, the cigar went out on me and required a re-light. The smoke has become pretty creamy with just a slight spice. The pepper on the retrohale has mellowed out a bit. About halfway through the third, the charred oak flavor returns. The charred oak flavor mellowed out a bit, but kept up the profile through the remainder of the third. The body and strength bot continued at medium-full.

The final third continues with the mellow charred oak flavor. The retrohale is creamy with a little spice to it. The creaminess in the retrohale seems to be increasing as the cigar gets shorter. The charred oak continued through the remainder of the smoke with the very creamy retrohale. The body and strength both finished at medium-full.

The draw was near perfect. Just the right amount of resistance to deliver a lot of flavorful smoke. Other than the cigar going right right about the midway point, the cigar burned pretty well. A little wavy but never going off kilter or requiring any touch ups. There was just enough give when squeezing the cigar and I didn’t detect any soft spots.

This was a pretty good cigar. Just one knock on the performance with it going out in the middle. Not a lot of transitions, but with the flavors it was producing, it didn’t seem to affect my enjoyment level. With the strength and fuller flavors, I would recommend this as an evening cigar or the second or later cigar in a multiple cigar day. If you’re an evening coffee drinker, that might be a good pairing as well. The price point will probably deter a lot of people from this cigar, but I think it would be well worth it to try one and see if it is something you might want to pick up more of. I don’t see myself smoking another one because of the price, but if I was gifted one, I would smoke it gladly.

The cigar lasted 2 hours and 30 minutes for me.

I would give the Byron Reserva 5 Años Londinenses a personal score of 91.