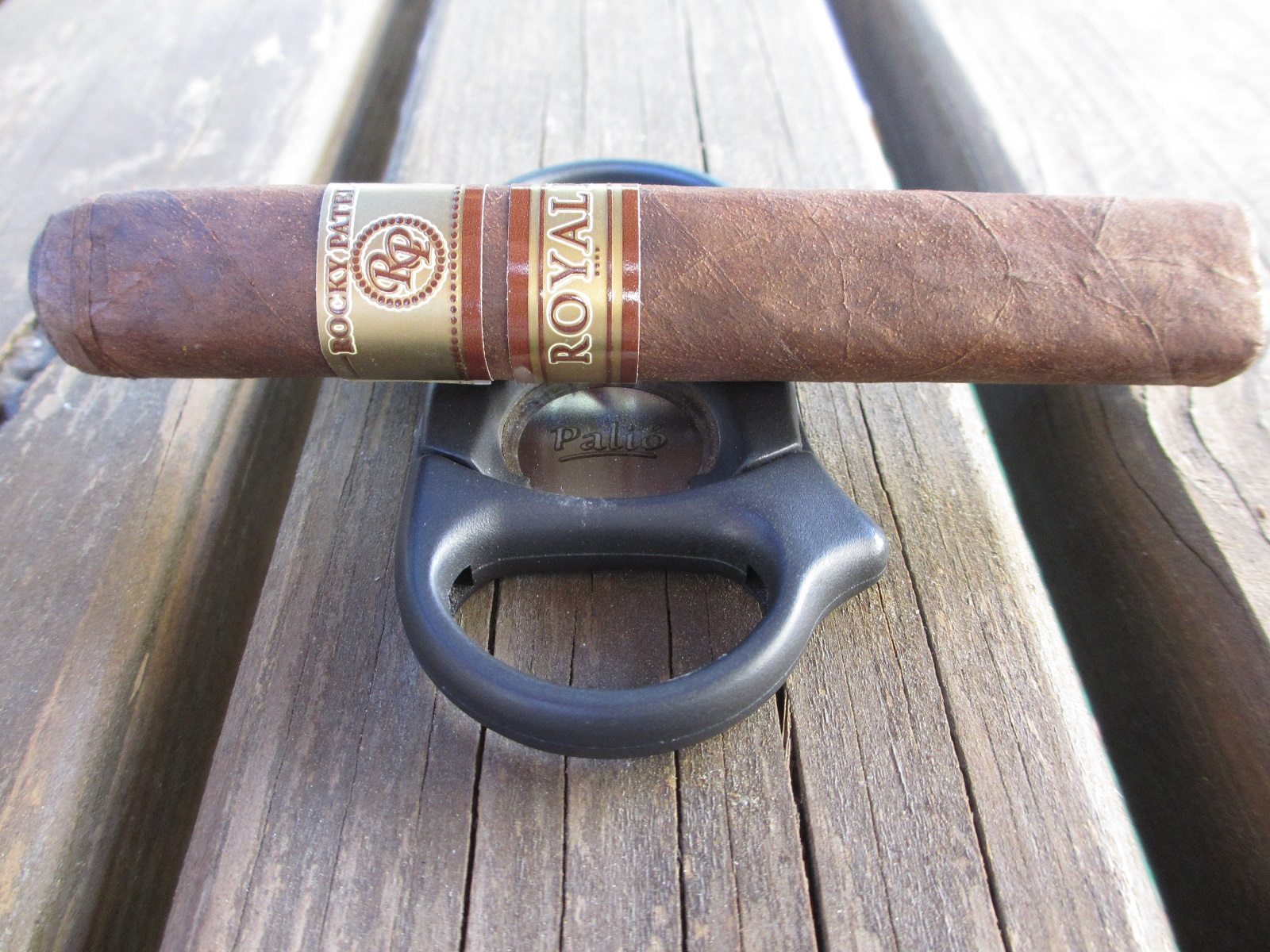 The Rocky Patel Royale was released in 2013 and uses an Ecuadorian Sumatra wrapper. The Robusto comes in at 5”x52 and carries an MSRP of $8.95.

A milk chocolate colored wrapper on a cigar with a very straight cornered box press on the underside and a somewhat more rounded press on the top side. There isn’t really much to speak of in the way of visible veins. The seams are easily visible, but very smooth. The triple cap is neatly applied. The aroma from the wrapper is a light barnyard and the foot brings a sweet raisin.

The pre-light brings what I would call a dusty sweet tobacco flavor. Upon lighting, a strong black pepper is present on my tongue with a slightly lighter version present on the retrohale. At about a half inch in, the pepper takes a slight step back and oak comes into the picture. At an inch in, the pepper really tones down. The oak still remains and there is a light coffee component that is now in the mix. There is still some pepper on the retrohale. As the third wraps up, the cigar has a good mix of oak and coffee. I would put the body at medium and the strength at medium-full.

The second third starts out with the oak transitioning to more of a cedar with just a hint of coffee. The cedar continues as the prominent flavor and just a hint of pepper on the retrohale. At the midway point a bit of mineral flavor, which is good, has joined in with the cedar. Nearing the end of the third, the mineral flavor goes away and the cedar transitions to a charred oak. The body remains at medium and the strength drops to medium as well.

As the final third starts, the oak is still the main flavor with the char mellowing out a bit. The retrohale is bringing a little bit of cream to mix in with the oak. The smoke is a little drying now. The cream has left the retrohale and it is oak both there and in flavor. About halfway into the third, the mineral flavor is coming back. After another quarter inch, the mineral flavor went away and the oak is what finished out the cigar. The body and strength both remained at medium.

The draw was a little tight, maybe from the box press, but nothing that was detrimental to getting lots of flavorful smoke. The burn was very good. It went off a bit in the final third, but caught itself back up without any intervention. The ash held on for each of the thirds, so it only dropped off twice. The cigar was firm throughout. The pack was a bit full, probably due to the box press, but the cigar performed very well throughout the smoke.

This cigar was pretty good. The first third was the best in my opinion with the final third being my next favorite. The transitions in the first third were very interesting and those slowed down as the cigar went along. The flavors were good overall and the cigar performed very well requiring no attention from me. I could see this cigar pairing well with coffee or a porter or stout. Probably not a cigar for a beginner, someone who has smoked for a little bit or a long term smoker would find this enjoyable.

The cigar lasted 1 hours and 50 minutes for me.

I would give the Rocky Patel Royale Robusto a personal score of 90.
–