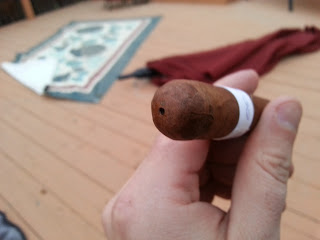 “The cigar had a unique look with the closed, pointy foot. It had a clean medium brown wrapper that shows slight marbling in color. There were not any problematic or visually intrusive veins.” –Will (Dubv23)

“This cigar has solid construction with a nice cap and no soft spots. The cigar itself is a very interesting shape, like a half perfecto” –Emmett (rhetorik) 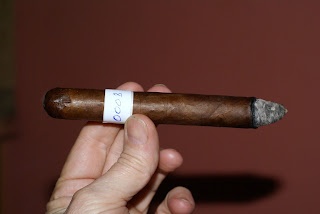 “Dry but sweet cedar tasting tobacco with a spicy coffee flavor. The draw was tight at first but opened up nicely after an inch in. Plenty of cool smoke, easy to retrohale, giving a light taste of anise.” –Ron (shuckins) 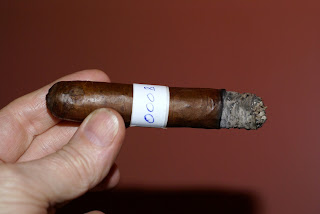 “The first thing I notice about the second third is a sweetness developing. It’s not very complex, but mellow and enjoyable. The wrapper split part way though and gave me some trouble with the burn. Towards the end I started picking up a distinct pumpkin spice that was a nice surprise.” –Emmett (rhetorik)

“Pepper dies down a bit, but still getting some chocolate flavors with a very nice sweet syrupy flavor and a touch of earth. Very pleasant smoke.” –Nicholas (volpow61) 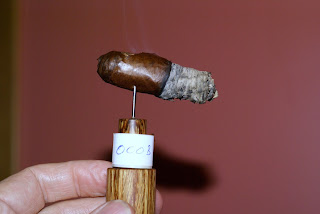 “The flavors in the final third were consistent with the beginning two thirds. The final third did bring forth a slight change in the saltiness which became sour. It was not harsh or bitter and did not impact flavor negatively. It actually complimented the flavor profile nicely.” –Will (Dubv23)

“Sweetness is the prominent flavor, with some pepper/spice mixed in. Well balanced and blended flavors, with a little ‘zing’ on the retrohale. Right before the end, the BBQ flavor really jumped out, which caused me to really savor the last blast of this stick. Very nice finish, especially with the challenges with the wrapper. With all that though, it was really an enjoyable smoke.” –Robert (NavyPiper)

“The draw was great after the first inch, just the right amount of resistance. The first inch was very stiff.” –Emmett (rhetorik) 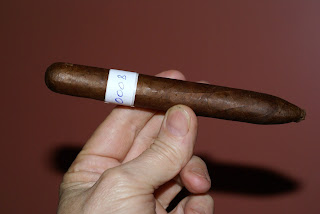 “Never had a problem with the burn, although it did have a slow start.” –Ron (shuckins)

“Overall this was a pleasant smoke that offered some unique flavors with intriguing construction. The closed foot was an interesting touch but required cutting in order to get a decent light and draw. The cigar had a lot to offer and I thought it delivered a solid experience that anyone would appreciate.” –Will (Dubv23)

I enjoyed the cigar and would have scored it higher, but it was one dimensional for a while. However, I would smoke it again.” –Ron (shuckins)

IPCPR 2014: The Show in Pictures – My Father/Tatuaje