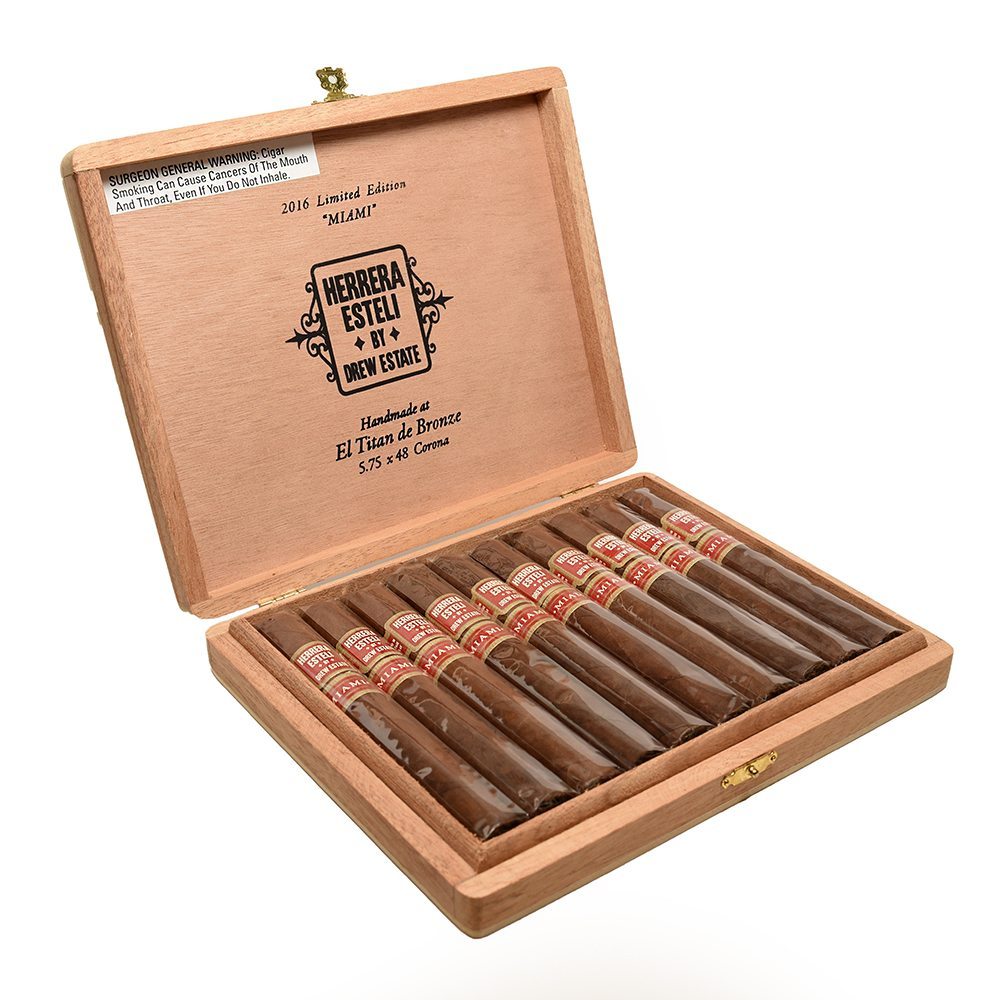 Friday, July 22, 2016 — Miami, FL – Drew Estate announced today the release of Herrera Estelí Miami as a line extension to the Herrera Estelí Brand. The new cigar will be displayed in Drew Estate’s booth (Booth #2403) at the IPCPR Convention and Tradeshow held July 24 – 28, 2016 in Las Vegas, Nevada.

Willy Herrera known for his signature Cubanesque blending style was recruited to join Drew Estate in 2011, after running the El Titan de Bronze factory since the late 90s. The factory is known for being one of the few remaining hand made cigar factories in the United States and employs only Level 9 rollers from Cuba who continue to manufacture cigars in traditional Cuban style, including tubing the filler and finishing with a triple cap.

Willy spent the first 3 years at Drew Estate, predominantly in Estelí, Nicaragua adapting to working at La Gran Fabrica Drew Estate, a factory with access to some of the most innovative and diverse black tobaccos in the world. In 2013, Drew Estate released the Herrera Estelí Brand, a medium bodied, spicy, cubanesque cigar, and followed up in 2014 the release of Herrera Estelí Norteño, a full-bodied maduro, as his sophomore release.

The new Herrera Estelí Miami debuts in a 5 ¾ x 48 corona vitola packaged in 10 count boxes with an MSRP of $130.00 per box. The blend features an Ecuadorian Habano Oscuro Wrapper, Ecuadorian Sumatra Binder, and Dominican and Nicaraguan Fillers. The unique attribute of the new release is that it is produced at El Titan de Bronze Factory on Calle Ocho in Little Havana, Miami, Florida.

When asked about the new cigar, Drew Estate Master Blender Willy Herrera stated, “The journey at Drew Estate has taken me to new countries, and almost every state in the union. After 5 years, it was time to come home and work on a project where it all began for me. Going back to my roots and in my home where I was brought up has been such a blessing.”

Fans of Herrera Esteli are encouraged to download Drew Diplomat the official mobile application of Drew Estate – The Rebirth of Cigars which is now available in the App Store for iPhone®, and iPod Touch® and on Google Play™ for Android™. For more information head to http://drewdiplomat.com