The Pichardo Reserva Familiar was one of the launch lines for relatively new cigar company ACE Prime. It comes in three blends, Connecticut, Habano, and San Andres. Like all ACE Price cigars, they are rolled at Tabacalera Pichardo in Nicaragua under the eye of Don Eradio Pichardo, a third generation tobacco agriculturist and native of Cuba. Today we are reviewing the Pichardo Reserva Familiar San Andres.

The blend uses a Mexican San Andres wrapper, Nicaraguan Habano binder, and Nicaraguan Ometepe, Esteli, and Jalapa filler. All Pichardo Reserva Familiar come in one size, a 6 x 52 toro. They come packaged in 15-count boxes with an and sell for $12.50/cigar. 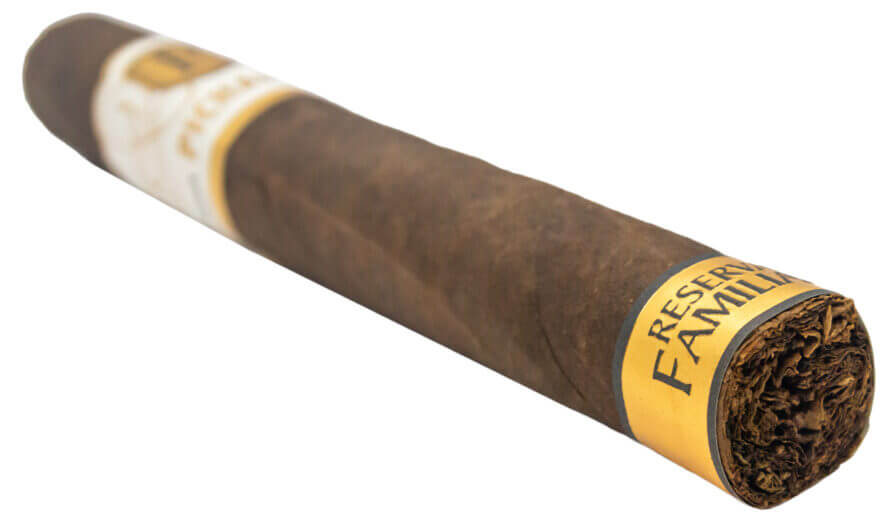 “Dark brown wrapper with an even roughness throughout. The wrapper leaves a bit of the binder exposed at the foot as well.” –Doug S. (Unpossible_1)

“Scents of pancake mix, roasted peanuts, and a tinge of cedar bring a beautiful nasal bouquet to the table while baking spices and red fruit flavors join in with the cold draw.” –John A. (Bostoneo)

“Directly after lighting your nose is absolutely singed with crushed red pepper for probably about half of the first third after the crushed red pepper dies down a little a wonderful complex profile emerges. Leather earth bread and cream. The bread note is missing the yeast for some reason. Some peanut and bitter walnut wood as well. The bitter walnut wood starts to over power all notes and becomes quite abrasive.” –Ryan H. (Ryan H.)

“Upon lighting up I am greeted with ample amounts of dark coca, leather, and sweet cream butter… simply delicious. Pristine white ash forms as this flavor profile remains VERY consistent the whole length of this third, which is very smooth and pleasant.” –John A. (Bostoneo)

“The smoked meat continues with a bit of a kick to it as well. A little heat from cayenne pepper pairs quite nicely with it.” –Doug S. (Unpossible_1)

“As I approached the second third, I was getting a nice toasty bread with some sweet spices, a super smooth retrohale and a long salty finish. It’s hard to set this one down. Burn has been spot on as well. I’m loving this cigar!” –James H. (Keikan Jim)

“With the stem out the cigar went from a medium to a mild cigar, which is puzzling, but OK.  The cigar is just giving me cream upon cream, but there is a hint of spice in the background that’s just lingering. ” –Mickey T. (irratebass)

“The last third. The medium profile of dark leather, black pepper and salt with a char note becomes dominate with a bump in strength compared to the previous two thirds.” –John A. (Bostoneo)

“The cigar started out really well and very complex with some really good transitions then just went down Hill like throwing a anchor into the sea. Once half way through the second third there was nothing good about this cigar. I hope I never smoke this cigar again. Yuck” –Ryan H. (Ryan H.)

“OK, I’m not going to be a dick, but if I bought this cigar with my own money I’d be petty pissed. The cigar had a 2 inch stem in it that blocked any type of airflow……now being the cigar smoker that I am, I know how to perform surgery on cigars, but what about those poor sap noobs? This type of construction can really tarnish a cigar company’s reputation……..*jumps off soapbox*  While the stem was in the cigar I got an incense/campfire flavor (this not really a flavor my palate thanks me for) after the steam was out I just luxurious cream with hints of spice, and it made the cigar go from medium to a mild….which is odd I know, but it is what it is.  I’m torn on this one……not sure I’d smoke again for fear of the poor construction….I will let the powers that be in the BMP dept figure out my score.” –Mickey T. (irratebass)

“Overall this was a good cigar. Very consistent, flavorful, not terribly complex, but still delicious. Nothing stood out like a beacon for me, it was just easy going and well constructed with enough flavor. An easy recommendation if an affordable stick.” –John A. (Bostoneo)

“I’m not a huge fan of the profile, but it definitely worked well…at least until the final third. I’d like to think I just got a dud and would revisit this cigar again to see if the profile holds up the entire time.” –Doug S. (Unpossible_1)

“This was an amazing cigar and I will search out a box after I find out what it is. I just hope it’s not out of my price point. Medium strength that on occasion ventured into the full range with phenomenal flavors throughout and a near perfect combustion rate made for a great smoking experience. ” –James H. (Keikan Jim)