The Ave Maria brand has been around for a long time, mostly exclusive to the catalog retailers and is made by AJ Fernamdez. The brand is similar to Man O’ War and Diesel in that respect. The latest release from Ave Maria is the Ave Maria Lionheart, although it was available back around 2012, then discontinued, now brought back to life.

“Really attractive medium-brown wrapper that is slightly oily to the touch and almost silky smooth. The seams are almost invisible and while about 90% of the wrapper has the same lightly sheen in color and texture there’s a section at the foot that’s noticeably darker with a matte finish.” –Alan (Eulogy) 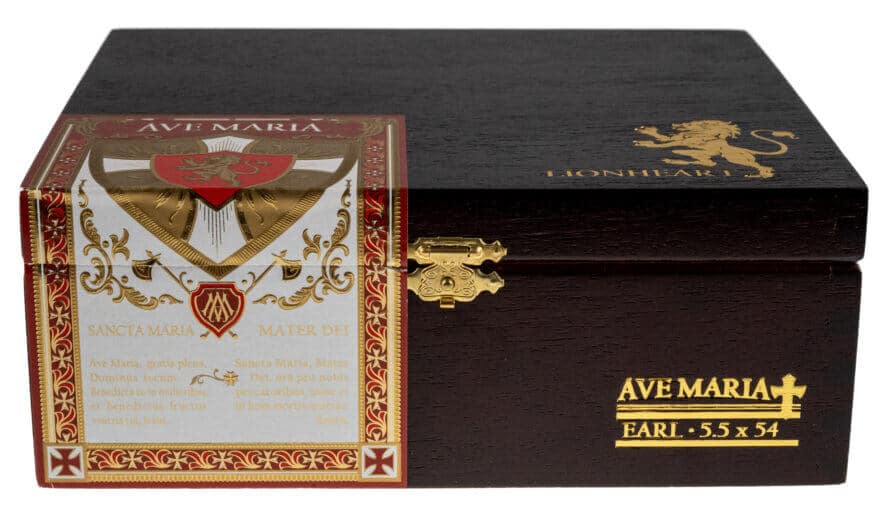 “Along with cedar and hay there are mild notes of cocoa and coffee. No ammonia or barnyard scents noted. The dry draw brings sweet notes and seems very smooth.” –Diana (ArmyRN)

“Toasted the foot and the first several puffs were full of roasted nuts, namely cashews and a slight pistachio sweetness. Retro was amazing. Lots of creamy smoke that really envelopes your mouth. Floral notes were there as well. Great beginning to this cigar. Ash held on for well over an inch before I tapped it off. Burn stayed fairly even as well.” –Kevin J. (maninblack77)

“I am greeted with a nice mix of leather and almost vegetable notes at the start of the cigar. It was reminiscent of celery seed on the retro for me. At the back of the palette there was some chocolate and a slight twinge of jalapeño and red pepper on the finish.” –Diana (ArmyRN)

“Going into the second third the leather with sweet chocolate continued. The pepper has almost dissipated and there is a sweet finish with some saltiness to the wrapper.” –Diana (ArmyRN)

“It’s really just barely hitting that medium bodied level but the flavors are good. The green juice flavor is a bit stronger now and the sweetness has dialed back quite a bit. Flavors are good with notes of tobacco, dry leather, baking spice, and mild pepper.” –Alan (Eulogy)

“I’d hoped for a bit more depth, maybe a little roastier flavor as this cigar nears the end, but it’s actually trending toward becoming even sharper and offers more brightness in flavor. Looking for a positive side, this has me thinking a lot about the flavors that I do appreciate, and look for in cigars so I don’t feel that it was a wasted experience. And that construction… Still really impressive.” –John I. (John I.)

“Nearly perfect draw. Not really sure why it kept wanting to put itself out in the second third.” –Kevin J. (maninblack77)

“The cigar came a little damaged in transit to me so the off burn at the beginning was probably due to that. Towards the end of the cigar it did get very wavy at the end even with no damage to the wrapper.” –Alan (Eulogy)

“Looked very well made. The seams were very tight, the cap was well applied, and there were no soft spots prelight I could find. The draw was far too tight though so I have to assume it was rolled too tight or slightly over filled.” –Alan (Eulogy)

“It’s a good cigar with some issues. The draw was a distraction to me and the burn was always pretty off making me pay more attention to it then I normally care to. Even with pretty good flavors, they just didn’t fall into my wheelhouse. I’m sure there will be fans of this but I’m personally not one among them.” –Alan (Eulogy)

“Other than the bitterness that took its sweet time going away, it was an enjoyable mild cigar. The flavors present really worked well together. I’d score it an 85. Would have scored higher if the bitterness didn’t nearly ruin it for me. As always, I never write off a cigar after one try so I’d definitely try it again.” –Kevin J. (maninblack77)

“This was a tasty cigar for me. I enjoyed the varied array of flavor notes and found the combinations interesting. Leather with some vegetation flavors were made even more interesting by the red pepp and hints of chocolate. I would like to try this cigar again and recommend that I smoke it when I have the time and patience to provide the utmost care for a flavorful but fragile cigar.” –Diana (ArmyRN)

“Really well crafted and lovingly made cigar that is probably the polar opposite of what appeals to my palate. Very crisp, bright and dry flavors. In the early portion there were some fairly negative points offering bitterness and astringency. Overall a fairly mild cigar that may appeal to devotees of a more classic Connecticut flavor profile. ” –John I. (John I.)

Blind Cigar Review: Ave Maria | Lionheart Earl
Summary
"Really well crafted and lovingly made cigar that is probably the polar opposite of what appeals to my palate. Very crisp, bright and dry flavors. In the early portion there were some fairly negative points offering bitterness and astringency. Overall a fairly mild cigar that may appeal to devotees of a more classic Connecticut flavor profile. " -John I. (John I.)
Appearance
93
Aroma
90
First Third
92
Second Third
88
Final Third
90
Draw
92
Burn
91
Construction
91
Overall Experience
90
91
Very Good