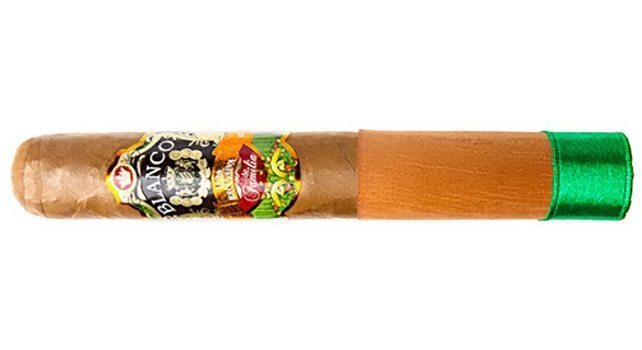 “Nothing to complain about. A solid feeling and well rolled cigar. Clean lines and a nice cap were a plus. Once cut, the draw was spot on adding to the great look and feel.” –Will (Dubv23)

“Peppery cocoa and light coffee flavors on light up. A taste of nutmeg and a little cedary tobacco joined in after a few minutes for a smooth start to the cigar.” –Ron (shuckins)

“Much more power and complexity than the appearance lead on. Starts off with a rich, creamy and smooth flavor with tons of smoke. Flavors were floral, spicy and added a smoked cedar flavor. There was a lingering coffee flavor on the palate that I loved.” –Will (Dubv23)

“More smooth creamy nutty flavors, right in the middle of my preferred profile range. Nice thick creamy smoke, just the way I like it.” –Craig (WyldKnyght)

“Through the second third, the spice is more of a background flavor with a predominantly nutty and sweet flavor coming to the forefront. Spice is a little more prevalent in the retrohale.” –Nicholas (volpow61)

“Stayed creamy with cocoa and sweet cedar until the last couple of inches, that’s when the nutmeg faded and pepper with light coffee showed up to provide a nice little kick at the end.” –Ron (shuckins)

“This is by far the best third of the cigar. In addition to the creaminess and caramel, I’m also getting some nice touches of baking spices specifically vanillas and nutmeg.” –Jason (bigslowrock)

“Draw was a little snug, but overall ok.” –Nicholas (volpow61)

“Nice even burn, ash held on until about the half way mark.” —Craig (WyldKnyght)

“Although it was almost one dimensional, I enjoyed the cigar because I liked the flavors in the dimension it had.” –Ron (shuckins)

“I was expecting a more mild smoke and was very pleased that this thing really delivered great strong flavor. It was not extremely complex and never really offered more than a few core flavors but they were delicious until the last inch. Construction was on point and added to the great experience. I’m excited to find out what this one is as I would like to grab some more.” –Will (Dubv23)

“Overall, if this cigar had ended at about the half way point I would have rated it much higher. After that midway point it just lost everything and was not enjoyable at all. If this stick is a low price point I could see me smoking this just for half of it then pitching it. Most likley I would probably pass on this stick. The last third just brought it down so much that it killed the experience for me.” –Nicholas (volpow61)

“This was a decent medium-light stick. I would have liked a bit more complexity in the first half of the stick though.” –Jason (bigslowrock)