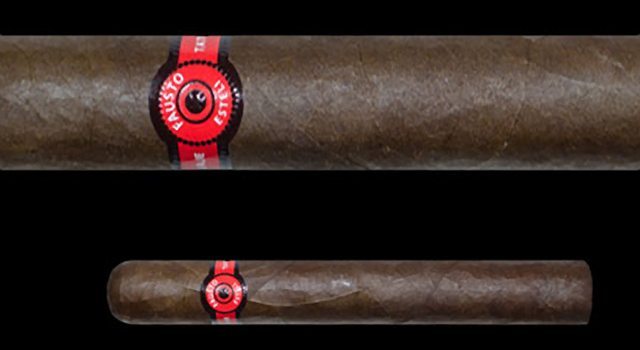 “Rough looking stick. Rustic brown with spots, wrinkles and large veins. Unusual tooth in large spots. Wrapper is quite textured, and not in a good way. Large stems are visible both at the foot and at the cut.” –Derek (StogieNinja)

“The aroma is a flavor that I cannot place immediately, definitely has nuances of sweet spices to it. The dry puff on the other hand was a pleasant surprise! Chocolate and sweetened cocoa and did I already mention chocolate? Also undertones of coffee are coming through.” –Sandeep (Djangos)

“Definitely well made and firm to the touch throughout the length of the cigar. There is not much give and no soft spots apparent pre light. The cigar is quite toothy and the veins are quite prominent.”-Sandeep (Djangos)

“Foot was a little squeezed, which caused some burn issue to start. Flavor had lots of sweetness with some nutty tones. Lots of thick creamy smoke. Near the end of the first third I started to get a leathery flavor. Some pepper sticking to the top of my mouth and back of the throat.” –Craig (WyldKnyght)

“The cigar starts off with a veritable blast of pepper, a combination of white and black. Initially the pepper is all around in my mouth but after a few puffs is gradually settling to the back of the throat. The major flavors are chocolate and cocoa with hints of coffee. There is a sweet spice flavor that I cannot place at this time. There is also a slight bitterness at the end of the draw. The smoke is thick and voluminous and the draw is close to perfect. The ash is grey to dark grey and is holding fast. Towards the end of the third, the pepper is dying down. The burn was good to start off with but after about an inch has started to skew and canoe a bit. I am holding off at this time from touch ups.” –Sandeep (Djangos)

“In this third, a nice transition into a very smoky spice, with a tangy pine flavor coming in. Very nice third, and having trouble slowing down my puffing, but it’s so nice that I want to practically continually puff this thing and enjoy the heck out of it! Towards the end of the third, the pepper started creeping up and a ‘nic kick’ started to come in.” –Robert (NavyPiper)

“As I enter the second third I am forced to do a touch up since the canoeing has not corrected itself and actually seems to be getting worse. The flavors are still great with a lot of chocolate and leather. The new spice flavor that I got in the first third is persisting and is giving this cigar quite the character. There are undertones of earthy flavors such as hay and dried grass. The pepper is now just in the finish and the bitterness is dying down as well. After the touch up the burn is much better. The only reason that I am giving this third a sub 90 rating is because of the burn issues (unfortunately I had to touch up once more before the end of this third).” –Sandeep (Djangos)

“Same flavors as the first and second third, but a lot mellower. Has some burn issues, but it did not take away from the flavor. Touched up the burn again.” –Craig (WyldKnyght)

“The last third is bringing less of the chocolate and the sweet spices but definitely has quite a bold character with a lot of leather and tobacco. The pepper is beginning to come back a little bit more in this third. The flavors are consistent. Fortunately the burn issues are not returning in this third and this is definitely making this third more enjoyable than the last. The smoke is just creamy and voluminous as ever. The ash seems to be holding for about three quarters of an inch before falling off. The earthy character with woodsy notes are becoming more prominent and seem to be dominating this third. Overall, a very enjoyable time with the complex flavors and the strength the last inch is bringing.” –Sandeep (Djangos)

“For as many stems coming out the end of this thing Im surprised it was as good as it was.” –Ian (Sp@rky426)

“Burn was so-so. Pretty wavy, and even though I was having a hard time slowing down and enjoying it more, I had to touch up the burn in the second and final thirds. Also had to relight in both of these thirds as well.” –Robert (NavyPiper)

“Unfortunately, I have to dock quite a few points in this department because of the canoeing that I experienced in the first and second thirds. I had to touch this one up twice before it finally evened out in the final third.” –Sandeep (Djangos)

“Overall, this was a great cigar for flavor, and consistency. There were several burn issues, but that did not take away from the enjoyment of this cigar.” –Craig (WyldKnyght)

“Sadly, this cigar was a dud for me. Maybe I got a bad one in the batch or something but it was not pleasurable in the least. If this had not been for reviewing it would have gotten tossed.” –Ian (Sp@rky426)

“This was overall a very good smoke with a refreshingly complex character. The changes in flavors were quite exciting and I am still trying to figure out what the sweet spice flavor is that I got in the first and second thirds. The strength was just right as well and this one would have scored significantly higher had the burn been good. The canoeing and skewing definitely detracted from the experience quite a bit. I think this might have been a single cigar issue and I definitely want to give this another try.” –Sandeep (Djangos)