In 2016 Phil Zanghi, of Debonaire House, collaborated with Bryan Mussard, cattle producer from Dillon, Montana to create a new brand, Cattle Baron Cigars. The two were introduced by Danny Sinclair, a rancher and cigar smoker.

Cattle Baron Cigars have a Nicaraguan habano wrapper with Dominican binder, and fillers from the Dominican Republic and Nicaragua. There are five vitolas that all share this blend: Little Doggie (4 x36), Cowboy (4 1/2 x 44, $6.25), Stockyard (5 x 52, $6.75), Bull (4 1/2 x 58, $7.25) and Trail Boss (6 x 54, $7.75). All are regular production cigars in boxes of 20. Cattle Barron Cigars are rolled at The De Los Reyes factory in Santiago, Dominican Republic, the same factory where Debonaire and Indian Motorcycle come from. 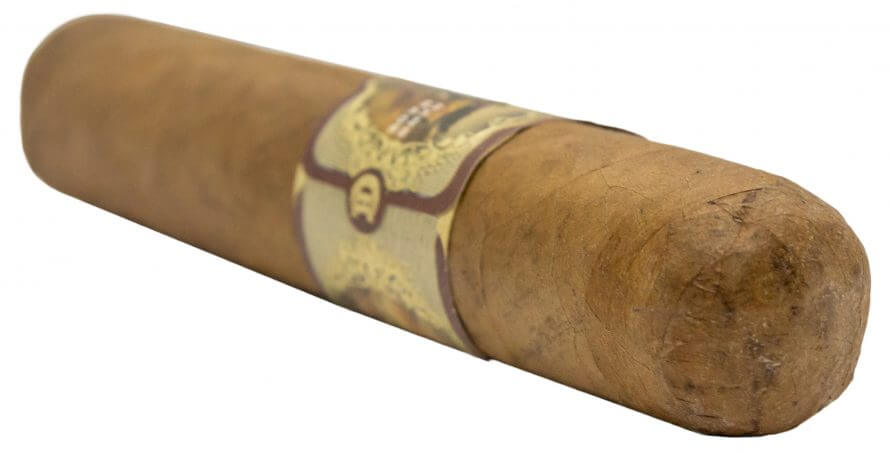 “The reddish brown hue of the wrapper is really nice. There is a slight gold tone mixed in which makes this husky cigar look classy. The double cap is substantial and the densely packed foot has the same coloring as the wrapper.” –Diana (ArmyRN)

“This cigar has started with a pleasant and mild white pepper and a creamy caramel. The smoke is oily and rich and lingers long on my palate with a gentle pepper heat. Through the nose the smoke is light and pleasant.” –Jason H. (Jokey Smurf)

“The initial flavors of coffee and almonds subsided and there was more of a woody flavor overall. A mix of cedar and oak

became prominent with hints of cinnamon and nutmeg along the way. At this point I was becoming underwhelmed with the flavors but it was still a pleasant smoke.” –Diana (ArmyRN)

“The second portion of this sample has the pepper fading and the creamy caramel moving to the front. The cigar has developed a bit of an almond note as well that is interesting. Mainly cream and sweet… Not a bad combo.” –Jason H. (Jokey Smurf)

“Flavors of earth and nuts take over the final third. The nut notes were over-roasted and played well with the earthiness.” –Isaac M. (The Nothing)

“Ad the cigar entered the final third a bit of heat in the smoke brought back a bit strength and returned the white pepper. This was most welcome as the heat complimented the sweetness very well. This is probably my favorite part of the smoke thus far.” –Jason H. (Jokey Smurf)

“I found the draw to be just a tad tight for my liking. I didn’t have to fight with it but it just wasn’t as clean as I like. No real issues though and it remained consistent.” –Diana (ArmyRN)

“The burn on this cigar was notable. The ash stacked up about halfway until it fell to the ground. ” –Isaac M. (The Nothing)

“The cigar had the looks, but the draw showed some small construction imperfections.” –Isaac M. (The Nothing)

“Not a bad cigar but just not in my flavor range and wheelhouse. It was a bit bland for me. The flavors I did experience were nice but I would’ve liked the woodiness to be more accented and accompanied by the initial coffee and baking spices. Pleasant but a bit lacking for me.” –Diana (ArmyRN)

“Even though this cigar didn’t have any amazing flavors, I still enjoyed it. The first third was light but picked up in strength the last two thirds which added to the enjoyment of the cigar. I happily smoked this cigar down to the nub which is always a good sign” –Daniel S. (Daniel S.)

“This was a mainly mild cigar that hit all of the positives… Good flavors, great burn, and an excellent experience. Where can I find some more!” –Jason H. (Jokey Smurf)

“All in all this wasn’t a bad cigar. It had some issues with the draw but if once you get that figured out it’s pretty tasty. It’s easy to enjoy while doing another things, but on its own, if you’re trying to really enjoy just a particular cigar, I don’t know that it would work. What I have another? Yeah, I’d have another, but I’m not going to rush out in stock up on them.
” –Isaac M. (The Nothing)

Blind Cigar Review: Cattle Baron | Bull
Summary
"All in all this wasn't a bad cigar. It had some issues with the draw but if once you get that figured out it's pretty tasty. It's easy to enjoy while doing another things, but on its own, if you're trying to really enjoy just a particular cigar, I don't know that it would work. What I have another? Yeah, I'd have another, but I'm not going to rush out in stock up on them. " -Isaac M. (The Nothing)
Appearance
91
Aroma
90
First Third
88
Second Third
88
Final Third
88
Draw
86
Burn
93
Construction
88
Overall Experience
88
89
Good