Way back in 2011, a new company, Crowned Heads, released their first cigar, Four Kicks. That cigar was made with legend E.P. Carrillo at Tabacalera La Alianza S.A. in the Dominican Republic and their partnership has been strong ever since. When Jon Huber and E.P. Carrillo were working on the original blend for Four Kicks, there were three finalists. Two of them used a Habano wrapper, and one used a Sumatra wrapper. Ultimately, Jon Huber liked one of the Habano blend better and it became the final product. However, E.P. Carrillo preferred the Sumatra blend, and now that blend is seeing the light of day as the Four Kicks Capa Especial.

The blend for Four Kicks Capa Especial uses an Ecuadorian Sumatra wrapper, Nicaraguan binder and fillers form Dominican Republic and Nicaragua. It comes in three vitolas: Corona Gorda (5 5/8 x 46), Robusto (5 x 50) and Sublime (6 x 54). All come in boxes of 24 with prices ranging from $8.65-$9.95 per cigar.

“I really notice the quad cap at the head. It’s not super common to see one and maybe it’s on purpose or maybe the roller just miscounted. I still like it when I see it even if it is probably overkill. The wrapper itself has a semi-glossiness to it but isn’t oily to the touch and the seams are nice. ” –Alan (Eulogy)

“New leather, green peppercorn, and an unidentifiable sweetness hits the tongue on a firm cold draw. On the nose, notes of aromatic leather dominate the nostrils” –John A. (Bostoneo) 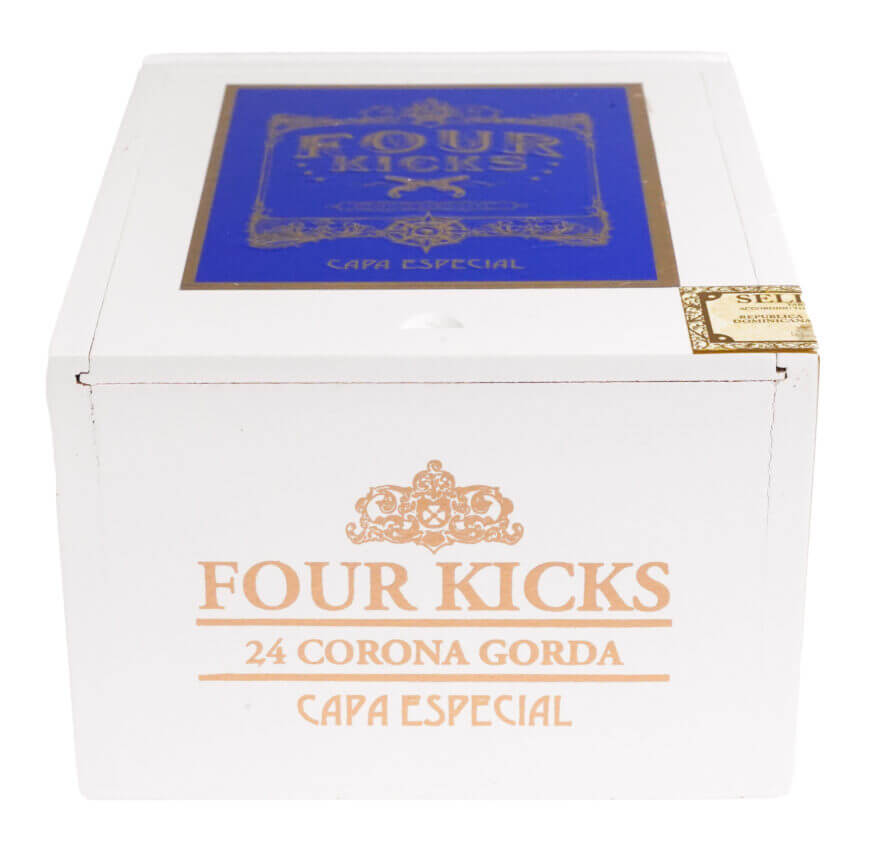 “After cutting, The dry draw gives me a mineral note with light baking spices. A touch of cinnamon and nutmeg to be exact. Draw is very good. Once lit, the baking spices are upfront with a little sweetness on the back side. Retro will set your nostrils on fire, so be warned! Red and black pepper blast the sinuses. The finish is long with a metallic note which is unpleasant to me. The only draw back thus far. ” –James H. (Keikan Jim)

“Let’s light er up! I begin off with intense flavors of char and aromatic leather. Quickly, this burns off into a medium, almost medium-full, profile of leather, vanilla graham cracker, and a lingering note of sweet cream, delicious! Transitioning towards the ends brings a similar profile, now with extra black pepper.” –John A. (Bostoneo)

“I like the sweet tobacco notes, rich cedar, leather, and mild pepper but it’s nothing super dynamic. It is a classic profile and it does it well though. ” –Alan (Eulogy)

“Flavors are staying consistent, which is great…I think too many transistions may have killed this cigar and what the blender was going for. ” –Mickey T. (irratebass)

“The final third was a near repeat of the second except that the strength amped up to a solid full bodied smoke. Dark fruit, bakers spices and a mineral finish. I must admit, I really liked this cigar in the end.” –James H. (Keikan Jim)

“Sweet woody flavors come in spades, complimented by minor notes of char. This profile deepens in body as I get down the

“Nothing to fault on the draw from start to finish. Good airflow and a slight resistance was the name of the game” –James H. (Keikan Jim)

“As the rest of review shows, this cigar was expertly constructed. Firm feel, weighty in the hand and a near perfect burn was the norm.” –James H. (Keikan Jim) 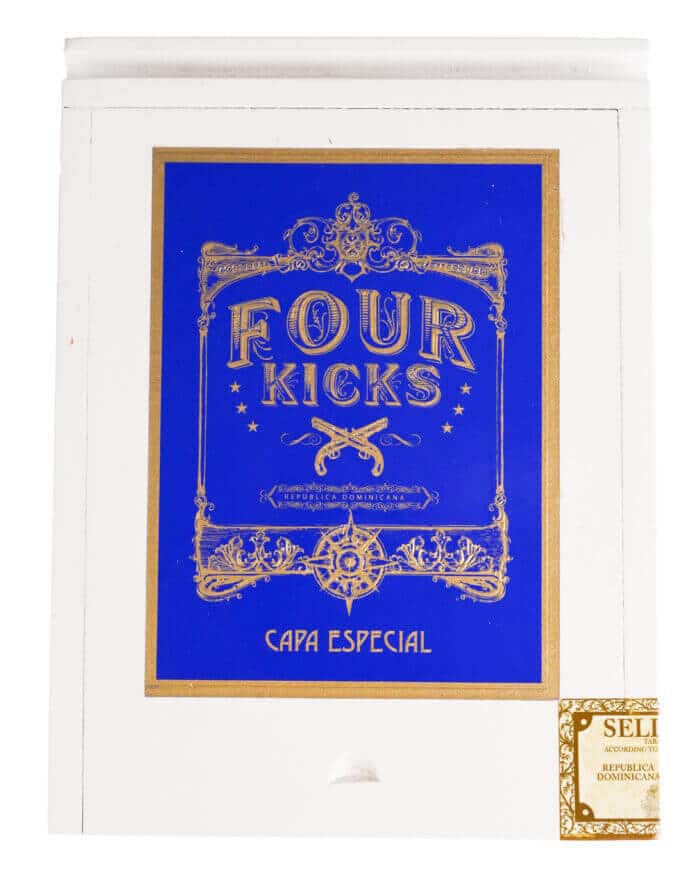 “This is about as steady as it gets in terms of cigars. The flavors were good in a classic way with nothing really changing from beginning to end. It did everything you’d expect while smoke with no surprises. The draw, smoke output, and construction were all spot on it’s just missing something for me.” –Alan (Eulogy)

“I liked this cigar…..the sweet honey flavors start and just never let up….I appreciate that. I feel too many transitions and it may have hindered what the blender was going for. This is a cigar you could start enjoying from 1st to the very last puff…..I nubbed this bitch…..definitely worth a 10pk.” –Mickey T. (irratebass) 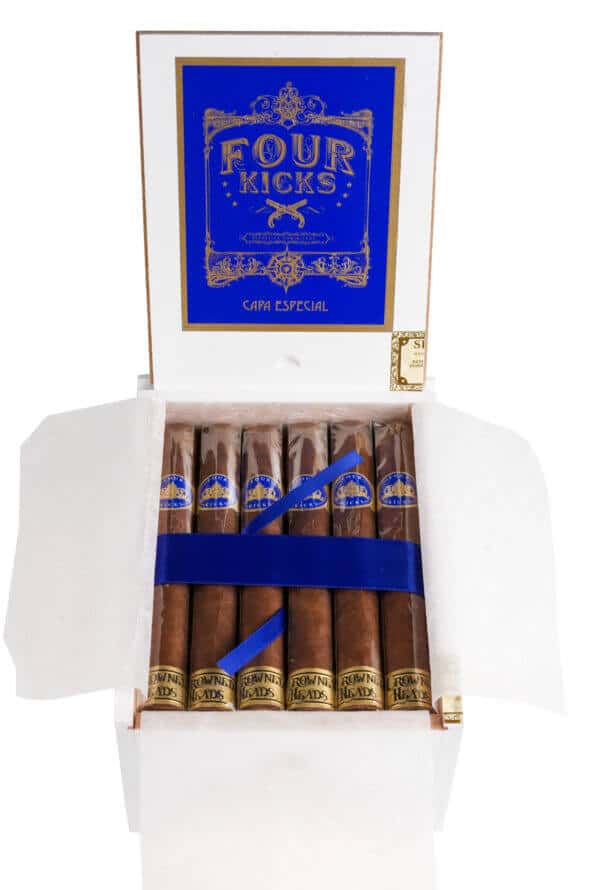 “At first, I really didn’t know if I was going to enjoy this one. The flavors were very good but the finish in the first third was throwing me off. One the finish settled though, I really enjoyed this one. I’d definitely smoke this one again. The perfect pairing for me would be nice smooth bourbon or dark beer.” –James H. (Keikan Jim)

“All in all, this was a pretty decent smoke, with the front half being the best complexity and flavor wise. The back half sort of went one note into an enjoyable profile, but mundane at times. Burn, construction, and other mechanics were spot on with this sample making a hassle free experience. ” –John A. (Bostoneo)

Blind Cigar Review: Crowned Heads | Four Kicks Capa Especial Corona Gorda
Summary
"At first, I really didn't know if I was going to enjoy this one. The flavors were very good but the finish in the first third was throwing me off. Once the finish settled though, I really enjoyed this one. I'd definitely smoke this one again. The perfect pairing for me would be nice smooth bourbon or dark beer. " -James H. (Keikan Jim)
Appearance
92
Aroma
93
First Third
91
Second Third
92
Final Third
91
Draw
95
Burn
96
Construction
95
Overall Experience
91
93
Great