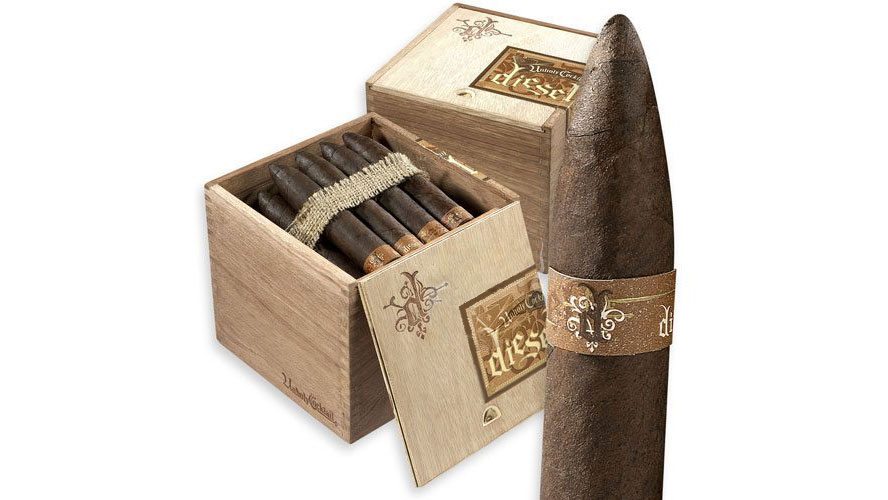 “A decent looking torpedo. Its not the cleanest application of a cap that I’ve seen. There are also some spots of excess cigar glue on the wrapper.” –Jason (bigslowrock)

“From the very first puff, it’s coffee beans and a slight nuttiness, with the wrapper giving off a semisweet chocolate and a flavor hard to describe but that leaves me with a chalky mouthfeel. There’s a little leather, a little dry wood and a little spice. At about an inch in, it has a molassasy sweetness to it that I don’t particularly care for. At this point, I’d put money on this being an AJ Fernandez blend.” –Derek (StogieNinja)

“It’s started out surprisingly strong with billowing smoke right off the bat. The ash is light gray and held on throughout the entire first third. I got black pepper immediately after initial light and eventually tapered off into a milder form. Almost like white peppercorns. The retrohale boasts cream combined with a vague molasses-type sweetness. Interesting flavors and also enjoyable.” –Milton (mjohnsoniii)

“The ash fell midway through the second third. The flavors are more mild at this point with a cherry-like sweetness combined with nuts and cloves. I’m not really sure if I like this combination of flavors or not but they are very distinctive.” –Milton (mjohnsoniii)

“A taste of coffee has joined the leather, chasing away a little of the dryness, although the tobacco still has a bit of woodiness to it along with a touch of light pepper that was pleasing to the palate, but burned a bit when retrohaled.” –Ron (shuckins)

“More coffee came through towards the end as the leather faded and the pepper kicked it up a notch. The tobacco kept it’s woodsy flavor but lost most of the dryness, changing gears as it got to the nub.” –Ron (shuckins)

“Still leather and wood for flavor. This has been a very consistent stick, with no surprises. Towards the end, it started to get a little bitterness.” –Robert (NavyPiper)

“Tight at first, but opened up nicely after a few puffs.” –Ron (shuckins)

“Burn was pretty even all the way through, no problems at all with it.” –Robert (NavyPiper)

“This was a tough one for me to rate. When I started smoking cigars, maduros were my go-to. I loved the creamy chocolate and peppery kick. I still enjoy those things, but my palate has become more refined and cheap maduro wrappers just don’t cut it for me anymore. That’s what we have here – a cheap maduro. It has everything you’d expect from one, including deep flavors of chocolate and earthy soil. But it also has that slightly chalky mouthfeel and molassasy sweetness from the wrapper that is common on cheap maduros, and that I’ve personally grown to dislike. I absolutely recommend this as a better alternative to the 5 Vegas Gold Maduro, or the Rocky Patel Edge Maduro. It takes the best qualities of those, and improves upon them. A must try for all fans of AJ Fernandez’s work.” –Derek (StogieNinja)

“High hopes was an understatement prior to lighting this one. I expected a lot more especially seeing that I’m an avid maduro fan. It had multiple flavors that I enjoyed during the first and second thirds that mellowed out much too quickly leaving a final third that was…meh. I never judge a cigar on the first one I try, whether good or bad, so I’d definitely smoke another but I wouldn’t make it my life’s work to find another.” –Milton (mjohnsoniii)

“Just not a good cigar. Harshness pretty much dominated the smoke.” –Jason (bigslowrock)

“A good middle of the road cigar, but fun enough that I would smoke another.” –Ron (shuckins)

“I liked this cigar. It was very consistent in flavor, burn, and draw throughout. It was very enjoyable, and wish it was actually a little longer!” –Robert (NavyPiper)