Back in 2019, Drew Estate announced the return of one of their best received releases of all time: The Herrera Esteli Habano Edicion Limitada Lancero. This smoke was originally released in 2014 as a limited edition and gained rave reviews and became heavily sought after.

It uses an Ecuadorian Habano wrapper, Honduran binder and Nicaraguan fillers. Only 4 pairs of rollers make this cigar at La Gran Fabrica Drew Estate, the same ones that make the Liga Privada Unico L40. It comes in boxes of 15 with an MSRP of $186.96. 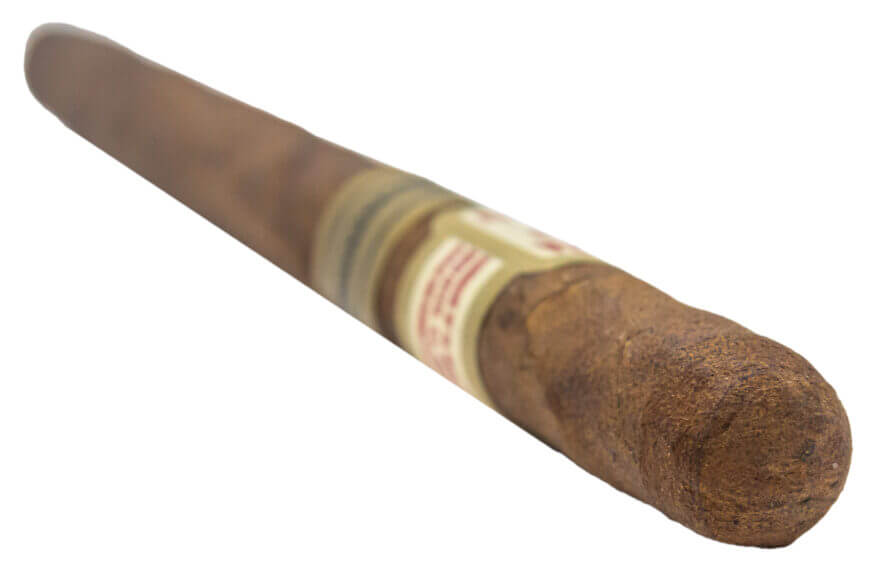 “The cigar looks fairly rustic but has a lot of charm due to the lancero size. There is a nice toothy texture to the fudge brownie colored wrapper but I feel like the double cap at the head could have been a touch larger. ” –Alan (Eulogy)

“The retrohale is great. Very rich notes of leather and red pepper liven up the notes from the draw. The draw isn’t bad but it’s missing the punch of pepper that is found on the retrohale. I do like the balance from the baking spice, leather, cedar, and black coffee from the draw.” –Alan (Eulogy)

“Upon cutting, the dry draw was extremely tight. I checked to see if I missed a closed foot on inspection, I did not. Its just tight. Once lit, it opened slightly but was still a little tighter than I prefer. The first draw had a slightly acidic flavor that was off putting. However, after it got going a little, anise came to the front with a salty finish. A few puffs later, a slight sweetness creeped in giving it a black licorice profile. The ash is white and hangs on tight for about 3/4 of inch before falling. Not to bad.” –James H. (Keikan Jim)

“Entering the second third, flavors of leather and cocoa remain but with a peaty and smoked meats note now. This profile mains intact for the entire duration of this third, however provides a decent tasting profile at least.” –John A. (Bostoneo)

95 mins in and I’m just now at the 2/3!!!! Like I said, it’s a slow burner.  Cream is there, but way in the back….wood has taken the driver seat. Chocolate is still there as well, or maybe it’s coffee idk.  The retro gives me more chocolate and a bit of an orange peel or some kind of citrus.  Cream comes and goes, just to keep me on my toes I guess.” –Mickey T. (irratebass)

“Working on a switch peanut butter and cream but the earth and cream are still fading in and out. I would welcome the change, it would give the cigar another level. Change doesn’t end up panning out and we finish with the wood earth cashew/pistachios finish.” –Ryan H. (Ryan H.)

“Black coffee, baking spice, leather, cedar, and mineral are all still on the draw. It’s been pretty consistent from beginning to end with only the depth of flavors and strength changing. ” –Alan (Eulogy)

“Took two or three good puffs to get it going but when the cherry was warmed up it had a good resistance to it. ” –Alan (Eulogy)

“Very nice construction. Ash held on about an inch and a 1/2 maybe more. Wasn’t much in the smoke output dept sadly. The smoke was quite wispy.” –Mickey T. (irratebass)

“I liked it. Wood, coffee, chocolate, cream and orange or citrus to liven things up, but this cigar could have been about a third shorter. I did get a bit bored by the final third. I would definitely smoke again though.” –Mickey T. (irratebass)

“While not the most complex cigar I’ve ever had, this lancero provided enough flavor to keep me interested. A similar medium bodied profile of leather, smoked meats, pepper and malt carried the entire duration of the cigar with some flavors being more dominant at times than others, however it did not stray at all from this profile. While everything else was top notch, construction, burn, etc, I was left yearning for more in terms of flavor, which is why I wasn’t amazed completely by this stick. If you do want a lancero though, I’d recommend at least trying it out. It may be your cup of tea!” –John A. (Bostoneo)

“It is a great lancero. The flavors were bold and crisp with enough strength to provide body and depth. I realize that I forgot to mention this earlier but the smoke output was fantastic and the ash had a constant plume of smoke coming off of it. It’s an easy recommendation for me and worth picking up a fiver. ” –Alan (Eulogy)

“Overall, I enjoyed this cigar minus the firmness of the draw at first. Good flavors throughout with subtle shifts in profile were its strong point. I’d really like to give this another chance to see if the minor issues were a fluke.” –James H. (Keikan Jim)

“Recommend a box even with the construction issues it’s a solid stick.” –Ryan H. (Ryan H.)

Blind Cigar Review: Drew Estate | Herrera Esteli Habano Edicion Limitada Lancero
Summary
"It is a great lancero. The flavors were bold and crisp with enough strength to provide body and depth. I realize that I forgot to mention this earlier but the smoke output was fantastic and the ash had a constant plume of smoke coming off of it. It's an easy recommendation for me and worth picking up a fiver. " -Alan (Eulogy)
Appearance
89
Aroma
93
First Third
90
Second Third
89
Final Third
89
Draw
93
Burn
95
Construction
90
Overall Experience
89
90
Very Good