Cigar Dojo and Drew Estate released a new version of their collaboration, Dogma earlier this year, the Undercrown Cigar Dojo Dogma Sun Grown. The original Undercrown Dogma was Cigar Dojo’s first collaboration cigar ever. Since then there have been many releases each year, including the ReviveR that took a spot in our Top 25 in 2018. The original dogma released in 2014 and again in 2018 at the Rocky Mountain cigar festival, then offered that same year as a regular production release to Drew Diplomat retailers. This year, the two companies followed up that original release with a new version, the Undercrown Dogma Sun Grown.

This new version of the Dogma came about as a result of that original cigar taking Cigar Dojo’s #1 Cigar of the Year in 2017. They knew their next collaboration with be a take on that blend. The Undercrown Dojo Dogma Sun Grown is not only a unique size from the regular production Undercrown Sun Grown, but a new blend. The new size is a 5 x 54 box pressed robusto and the blend has also been tweaked in the same way the original Dogma was stronger than the regular Undercorwn Maduro line.
The blend uses an Ecuadorian Sumatra seed, Sun Grown wrapper, Connecticut River Valley Stalk Cut/Cured Sun Grown Habano binder, and a and Nicaraguan fillers including the addition of one leaf of extensively aged Ligero from the Nueva Segovia region along the border of Honduras to enhance the strength. Also differentiating itself from the original release is the packaging. Instead of coming in 10-count bundles, these cigars get their own 24 count wooden boxes. Each box costs $244.80 began shipping this month. The cigar is exclusive to Drew Diplomat retailers. 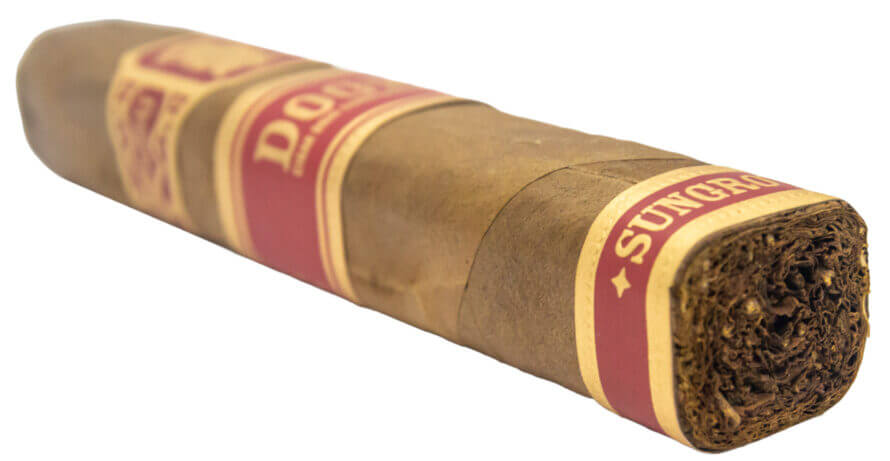 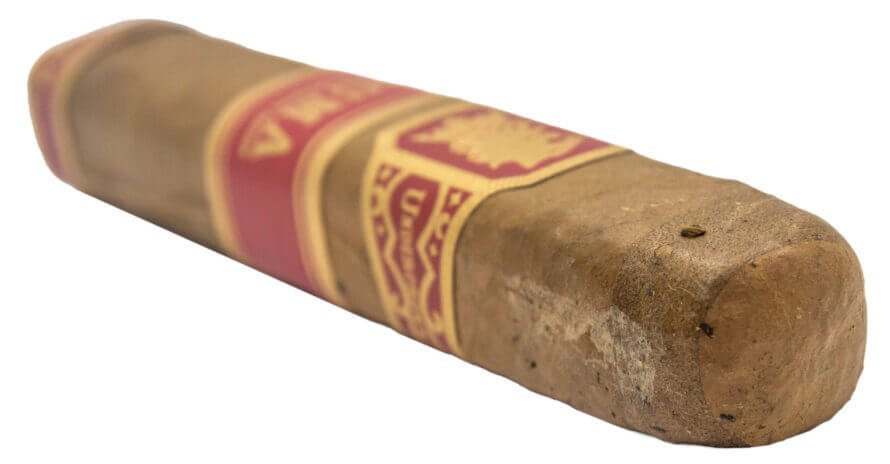 “This very soft larger gauge box press robusto has a silky milk chocolate wrapper with rumble strips underneath from the binder. The cap goes almost 1/4 in down the hip, so it is quite deep.” –Allison T. (The Yoga Ash)

“While this cigar starts out with some heavy tannin that quickly shifts to a much more acceptable floral and cream profile. The retro is very peppery but shifts as well to match the palate. Sweet cedar joins halfway through the third to bring some nice balance. A very nice opening to the smoking experience.” –Estevan Z. (TheRealBanzi)

“The initial flavors of this cigar are sharp, biting pepper, with a surprisingly creamy finish. Through the nose there is a burst of spice reminding me of horseradish…a quick, sharp, burn that almost immediately fades leaving just a memory of fire. The smoke is oily and leaves a creamy finish that lasts long into the next puff.” –Jason H. (Jokey Smurf)

“This has been an interesting cigar. The second portion has become mainly cream and almond but the smoke has become sharper and spicier through the nose. The texture of the smoke is still thick and oily, making really excellent smoke rings in the still night air. The finish is still creamy but leaves my palate tingling long after the smoke is gone.” –Jason H. (Jokey Smurf)

“Starting the second third I immediately encounter some white pepper that coats the back of my throat with a short to medium finish. Still very smooth and some creaminess and hints of hay and slight cashew nuttiness. No real transitions other than the pick up in spice.” –Jonathan R. (J.Lee)

“The cigar comes into its own now. Cinnamon, citrus, dry wood, and cream can all be found. As the third progresses nutmeg makes a huge appearance that lasts the rest of the cigar. Towards the end a red chill flake essence overtakes the experience. A nice end to a wonderful cigar. ” –Estevan Z. (TheRealBanzi)

“Earthy flavors have moved up front along with the red pepper. This has become a very complex and full bodied cigar. Every few puffs I get the caramel sweetness back but the pepper is really ruling the blend now both on the inhale as well as the retrohale.” –Lauren S. (Lauren S.)

“After a straight cut the draw is near perfect. Easy to draw makes for copious amounts of smoke. This adds to the overall smoking experience.” –Estevan Z. (TheRealBanzi)

“Other than being a bit fast, this cigar was superb in regard to burn. Until the final portion, that is, when I had one heck of a time keeping it lit… frustrating!” –Jason H. (Jokey Smurf)

“Really good construction. Firmly packed but very light in the hands. Great seams yet visible and the cap was flawless.” –Jonathan R. (J.Lee)

“The overall experience was frustrating since there were so many issues and it needed to be babysat instead of enjoyed.” –Allison T. (The Yoga Ash)

“This cigar checks all of the boxes. Great construction, wonderful changes in the profile, and impactful. It kept my attention for the whole smoking experience. If you are a lager ring gauge fan, you should seek this out. It has something for every level of smoker. At a little over an hour it makes for a great smoke for any situation. Find some and share it with some friends. You won’t be disappointed.” –Estevan Z. (TheRealBanzi)

“The first two portions of this cigar were quite good. Unfortunately, the finish has left me with a bitter taste in my mouth and a feeling of frustration. I hope the other reviewers fared better. Based on the start I’d like to give this another try.” –Jason H. (Jokey Smurf)

“Overall this was a good breakfast stick IMO. Really earthy and nutty with the slight raisin which made it a great companion for a nice brewed cup of Joe. ” –Jonathan R. (J.Lee)

“This blend was right up my alley. A good medium-full bodied blend with lots of sweet notes and pepper. This was a highly complex cigar that kept evolving through the experience. The oaky opening along with the sweet graham cracker set the stage for the cinnamon and red pepper powerhouse this cigar turned into by the end. If you are a fan of spicy cigars this is a must get for you.” –Lauren S. (Lauren S.)

Blind Cigar Review: Drew Estate | Undercrown Dogma Sun Grown
Summary
"This cigar checks all of the boxes. Great construction, wonderful changes in the profile, and impactful. It kept my attention for the whole smoking experience. If you are a lager ring gauge fan, you should seek this out. It has something for every level of smoker. At a little over an hour it makes for a great smoke for any situation. Find some and share it with some friends. You won't be disappointed" -Estevan Z. (TheRealBanzi
Appearance
93
Aroma
91
First Third
90
Second Third
90
Final Third
88
Draw
93
Burn
87
Construction
91
Overall Experience
91
90
Very Good