Steve Saka released the Sobremesa Brûlée Blue earlier this year. The Brûlée is a special size and tweaked blend from the original Sobremesa Brûlée line. It was originally supposed to launch at this year’s IPCPR but that show was cancelled because of COVID. Brûlée Blue is a lonsdale measuring 6 1/4 x 46.

The blend uses an Ecuadorian Connecticut wrapper, Mexican binder, and four Nicaraguan filler tobaccos. The original batch of Brûlée Blue was also aged for and extra year after rolling before being sold. The primary and secondary bands are a different blue color than the regular line and the cap is has pigtail. Each cigar retails for $14.95 and only 1,000 boxes of 13 were made this year.

“I’m still a sucker for man-bun caps. Just adds a touch of style to an already well made cigar and shows off the skill of whoever is rolling. There’s a small crack in the wrapper and a few small chips but I have a feeling its due to transit and storage without being protected by the cellophane. Otherwise, the seams are nearly invisible and the large double cap is expertly applied. ” –Alan (Eulogy)

“Notes of bread and nut with a touch of earthiness are the earmarks of a great smoke to come. ” –James H. (Keikan Jim) 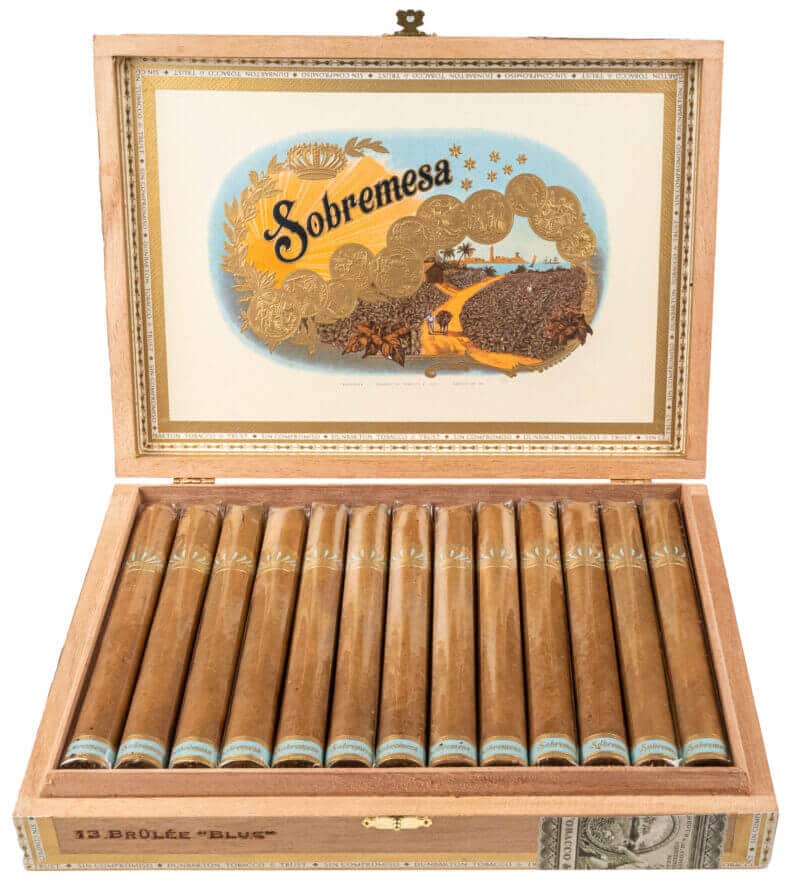 “The wrapper is very sweet on the lips. I don’t think that it’s flavored tip since the profile is not infused. The smoke output is excellent, the draw has a nice resistance, and consistency is creamy almost verging on oily. There’s a slight mineral note that sticks to the roof of my mouth with a white pepper and baking spice finish. Some sweet tobacco and cedar notes start to develop with a slightly bitter walnut finish. ” –Alan (Eulogy)

“The first puff from this beauty was so sweet I was wondering if this was a sweet tipped cigar. After a few minutes, I was convinced it was not. A nice honey buttered biscuit with a touch of spice was the profile of the first third. Retrohale was very very smooth with a hint of white pepper. So far so good!” –James H. (Keikan Jim) 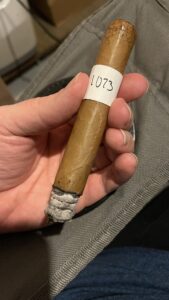 “Flavors are staying the same, but there are more wood notes that keep popping up…..especially on the retro and finish. I notice the wrapper is quite thin and delicate, have to baby it a bit….no worries though. ” –Mickey T. (irratebass)

“Into the second third I go! The profile has improved for me, slightly. Earthy and peppery notes start out the front end as it develops into a very dry, leathery, graham cracker kind of menagerie of flavors, quite interesting. I feel like this cigar has an identity crisis because of how dynamic and complex it can be.” –John A. (Bostoneo) 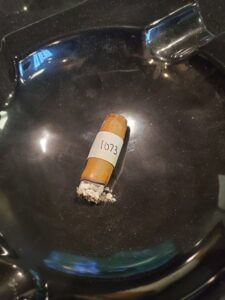 “The flavors and strength are both gaining intensity towards the end. It is not an overwhelming level of nicotine but it’s certainly more noticeable now. I’m still getting white pepper, baking spice, leather, cedar, and tobacco but the sweetness has leveled off a little. ” –Alan (Eulogy)

“At the start of the last third of the smoke, a charred note started to creep in. It was not a bitter char but more like a BBQ char and it was a nice flavor. It then quickly went back to the same ole thing. This is not a bad thing, because this is a pleasant cigar. ” –James H. (Keikan Jim)

“Even with a small crack in the wrapper the draw is perfect. Just the right amount of give and the smoke output is extremely impressive. ” –Alan (Eulogy)

“No issues from start to finish. I never needed to do any touch ups or relights and the ash was holding on for at least an inch at a time. ” –Alan (Eulogy)

“Good construction, my only concern was the thin and delicate wrapper….I didn’t run into any problems with the wrapper, but just to let you all know you may have to baby it. ” –Mickey T. (irratebass)

“Hot damn that was good is what is coming to mind when I think back on the experience. Just ticked off a ton of boxes for what I look for in a top tier cigar. The flair, flavor, creamy smoke output, and just the right hit of nicotine all make this a winner for me. Easily falls in my top ten for the year. Can’t recommend this enough.” –Alan (Eulogy)

“This was a great cigar! There I said it. Nice cream and sweetness elements that stayed with the cigar from beginning to end, all while throwing in some fruit, bread, mildew and wood notes to keep you on your toes. Would definitely smoke again. Dare I say it, but it did have a “cubanesque” profile to it…….being that it had a pigtail head I know it’s not a Cuban though.” –Mickey T. (irratebass)

“I really liked this cigar even though I do not normally smoke connies. I would definitely smoke this again and urge the reader to give it a try.” –James H. (Keikan Jim)

“All in all, this stick was just okay. At some points it was awesome, most of the time it was okay. There seemed to be a lack of identity in the flavor profile this stick provided, topped with some burn issues, I’d definitely need to try another before passing a final judgement on this stick, maybe it was just the one confused one in the box.” –John A. (Bostoneo)

Blind Cigar Review: Dunbarton Tobacco & Trust | Sobremesa Brûlée Blue
Summary
"Hot damn that was good is what is coming to mind when I think back on the experience. Just ticked off a ton of boxes for what I look for in a top tier cigar. The flair, flavor, creamy smoke output, and just the right hit of nicotine all make this a winner for me. Easily falls in my top ten for the year. Can't recommend this enough." -Alan (Eulogy)
Appearance
94
Aroma
92
First Third
93
Second Third
93
Final Third
93
Draw
95
Burn
95
Construction
94
Overall Experience
94
93
Overall Score - Great