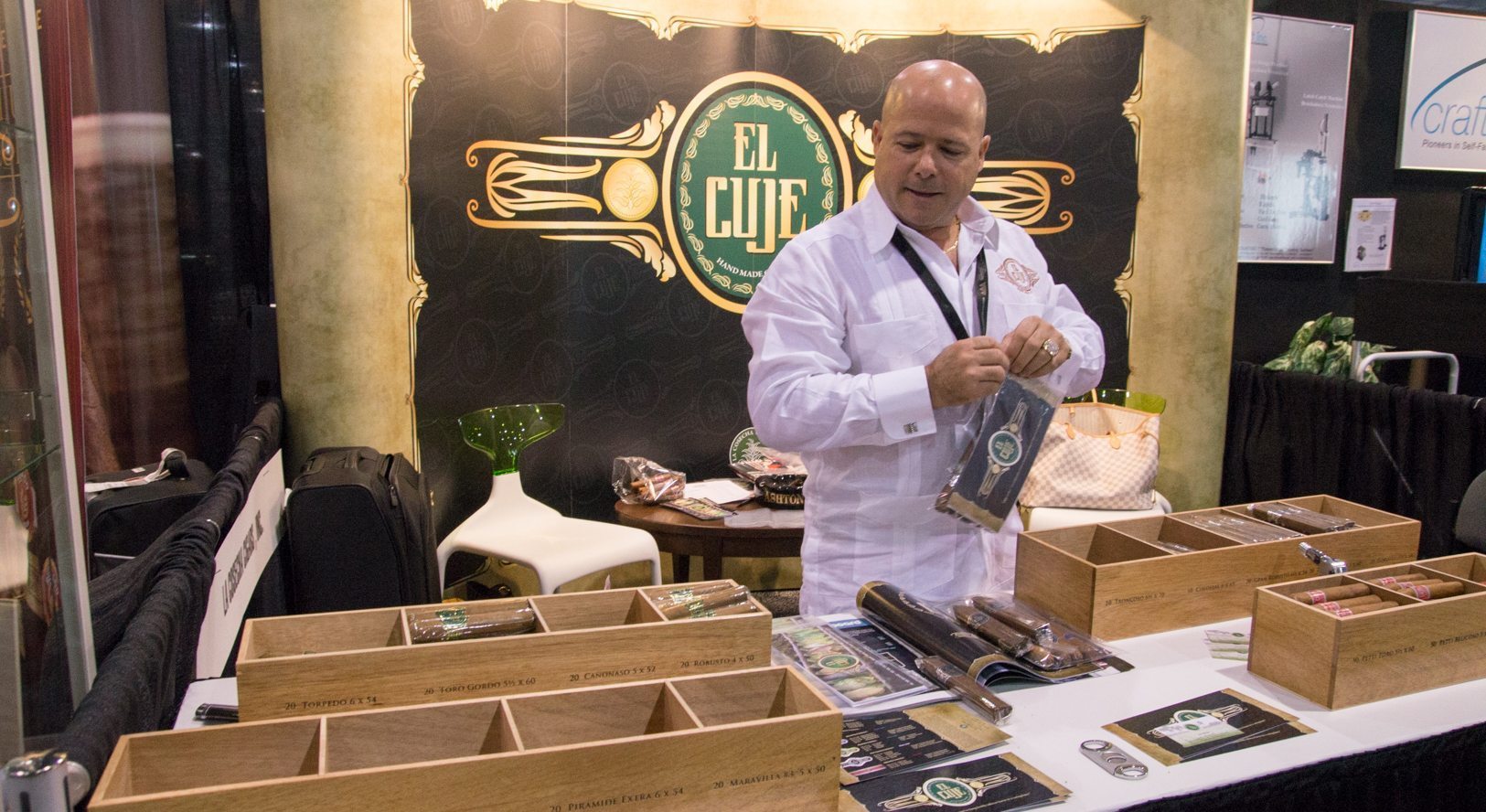 “This is a monstrous cigar to say the least. At least 6 inches long and a RG of 70! The wrapper is smooth with some veins in places. Seems box pressed with one side at least double of the other side. This gives it a quite lopsided quality. Not very firm to touch which makes me believe that the filling is not all that tight. There was one spot where the wrapper had a spot on it. At least triple capped but seems crudely put on as the leaf color is different from the rest of the cigar.” –Sandeep (Djangos)

“The aroma is quite pleasant. There are bits of cedar and cloves with light hints of leather and something sweet. Raisins come to mind.” –Milton (mjohnsoniii)

“Looks well constructed. Tight, well blended seams and firm with the right amount of ‘give’ to it.” –Robert (NavyPiper)

“A pleasant surprise at first light. Some really nice flavors here and they don’t necessarily hit you over the head either. Maybe a gentle giant? I’m getting some toasty cedar and leather on the draw and some pepper and earthiness way in the back of my throat on the finish. Most of the finish is gone pretty quickly but some subtle flavors linger for quite a while. It’s smoking slooooooooowwwww. I’m 20 minutes in before I have an even 1/2 inch ash. Glad I’ve got some time on my hands this afternoon. I start to pick up some sweetness, maybe like salted caramel, at about the one inch mark. I’m getting some musty tannic flavor too; like the scent off of grape pomace (skins and stems remaining after wine pressing). A nice start but for those of you keeping score at home, it took me about 50 minutes to smoke the first third. Onward!” –Brian

“A lot of pepper hits the tongue almost immediately, black and white mixed together. The pepper starts at the tip of the mouth and within 3 minutes has migrated to the back of the throat. Other flavors are mostly tobacco and leather. The sweeter spices are definitely present as there is a hint in the background but not pronounced yet. Ten minutes in and I am barely at the one inch mark. The pepper is now fading and the earthy flavors of hay and grass are coming to the forefront. The ash is light gray and holding steady. The burn is also good for such a large ring gauge. Once the heat is going through the cigar it has become more soft. After the one inch mark however the burn line seems to be getting more skewed. The pepper has definitely died down but now a chemical flavor almost like acid is taking over the surface of the tongue. There is also an oily character on the tongue. 25 minutes in and I am hardly at the 1.5 inch mark. Ash is holding steady. 35 minutes to get through the first 2 inches and the chemical flavor is still persisting. Ash is strong and the smoke is creamy and smooth. I am not sure at this point if I can finish this one!” –Sandeep (Djangos)

“Consistent from the first third change, strong bitter tobacco, but occasionally a puff of sweetness and coffee pop in. Very light on the finish.” –Robert (NavyPiper)

“The smoke is what you’d expect from a cigar this size. It billows and is very creamy. The profile of this one consistently changes and you can distinguish between them all as they have switched back and forth like clockwork. The chestnuts are prominent and have evolved into that of a more roasted type. Also, espresso has made its way into the mix giving this stogie a more “fuller” profile. The slight sweetness of caramel lingers and can really be tasted towards the back of the throat.” –Milton (mjohnsoniii)

“All the flavors have faded some and, although not quite as prominent as the first and second thirds, are very much still there and tastes just as good. The roasted property of the chestnuts is no longer present and the espresso has changed to a lighter body of coffee with the nutmeg being the dominant flavor overall. The burn has wavered quite a bit and has begun canoeing. Its still a very enjoyable smoke though.” –Milton (mjohnsoniii)

“Through the beginning of this third, the flavors where pleasant. Starting to get more earthy and spicy, but still nice for after dinner. Unfortunately, after the halfway point of this section, it was all bitterness. Purging didn’t help, really, so I have nothing to report but unpleasantness at the end.” –Myles (MylesT)

“The draw was super, not any issues with it.” –Robert (NavyPiper)

“It burned slightly uneven during the first and second thirds but eventually evened itself out without touch-ups. It was even for the most part until the final third where it began canoeing.” –Milton (mjohnsoniii)

“I went into this review with some bias against this format. It just seemed excessive to me. The flavors kinda won me over but I still don’t think I’d smoke it again. I just can’t take over two hours out of my day to smoke a cigar and I don’t really like dealing with a ring gauge of this scale. If you like BIG cigars, give this one a shot. The flavors are good. Just not for me, though.” –Brian (B-daddy)

“”Cigarzilla” was a huge smoke, not one to be had in an hour- in fact it took me a little over 2 hours to get through to the last half of the final third, and by then I was flat smoked out! A little nicotine at the end, but she ran cool to the end. While I for the most part enjoyed it, it was just too much for me, both size and duration. Pretty much one flavor except for the beginning, so I was starting to get bored. I don’t think I’d pursue getting any others, just because it was a marathon smoke, one that would be good if you  wanted a smoke to last through watching a football game or something. I am impressed how well it held together through its duration!” –Robert (NavyPiper)

“This one was definitely overwhelming to say the least! The flavors were pleasant most of the time but the amount of tobacco and the length of time needed were definitely not my cup of tea. I am sure I would like a smaller vitola if that is available!” –Sandeep (Djangos)

“Very seldom do I get real enjoyment from the first draw of a cigar but this one sucked me in right away. The flavors combined to make it a smorgasbord of enjoyable notes and flavors that could easily become a favorite. Just ensure you have 2 or more hours to spend on it. As enjoyable as this one was, I ran out of patience attempting to finish it off. This is definitely a weekend smoke that you must prepare for and would possibly be even better in a shorter vitola. Also, ensure you have a full stomach.” –Milton (mjohnsoniii)

“If not for the bitterness at the end, and the smoking time, I’d say this would be a perfect smoke at the end of the day, with a cup of coffee or espresso. In a smaller vitola, I’d probably really enjoy it.” –Myles (MylesT)