Espinosa Cigars revealed two new blends at IPCPR 2017, Espinosa Reggae and Espinosa Reggae Dread. Each of these use a Jamaican tobacco called lengua de vaca, which is Spanish for “cow tongue.” Last year, we reviewed the Dread here, scoring a 90.

Espinosa Reggae uses an rosado Ecuadoran wrapper and Nicaraguan seco binder with Jamaican lengua de vaca and Nicaraguan fillers. Each of the sizes comes in 20-count boxes. The three vitolas are: Robusto Grande 5 1/2 x 54; Toro 6 x 52; and Short Churchill 6 1/2 x 48. Each retail for about $10. The Reggae line was originally supposed to be a part of the Espinosa Backroom Series – a series of exclusive cigars for Espinosa Lounges. The limited distribution of that cigar was because of the limited access to the Jamaican tobacco. Since the FDA regulations on new brands took place, they released it nationally. 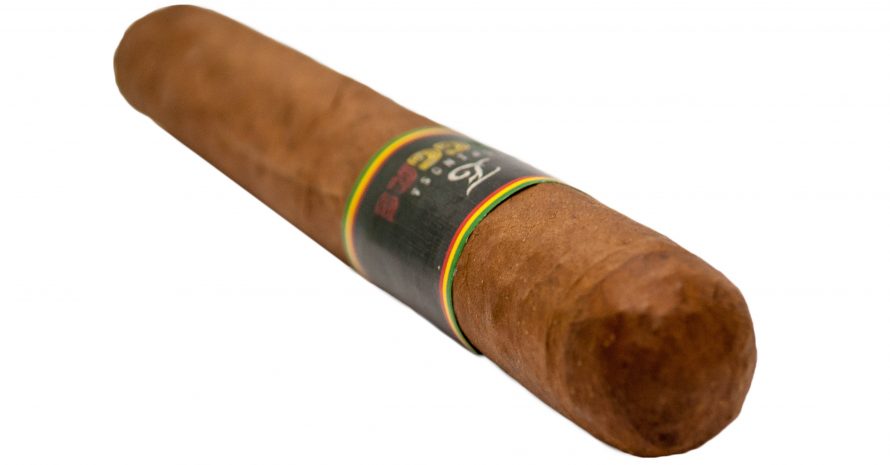 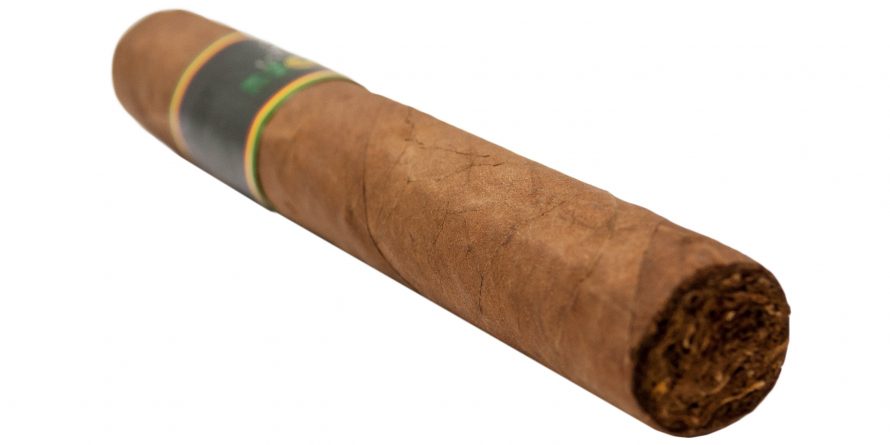 “The first-third has a light white pepper, dry walnut, hints of vegetal, and finishes with clean cedar note. The draw is perfect and slight resistance providing a clean cool smoke. The retrohale has a sweet honey and earth mix to it, and the ash is solid and clingy. ” –Jeff (ExpendableYouth)

“Upon the first inhale I am met with immediate flavors of nuts and peat. The smokey flavors are not overpowering and leave a nice “bitter” after taste. Definitely not a cigar for the faint-of-heart. Not too bold but not too mild.” –Eric (smalls29)

“The pepper has really begun to build in this third. The vegetal, walnut, earthiness are all still present but there is now a mineral and tobacco note that wasn’t present in the first-third. The wrapper has started to crack in a couple of places and flake towards the top but it hasn’t affected the overall smoking experience. ” –Jeff (ExpendableYouth)

“Second third only had slight changes. The smoke still had an overall sweetness but it was dialed back on intensity. The smoke became more of a dry nut taste. Sweetness was still of a honey. The bitterness was coming in and out as well.” –Matt (Mattehh)

“At this point in time nothing has changed with the after-tastes and flavors. It has maintained a nice balance of flavors. The nutty, smokey flavor is still in the fore front and the peppery taste remains a nice constant. I am definitely one to have this in my humidor.” –Eric (smalls29)

“The final-third is packed full of spicy pepper and cedar. There is still a bit of dry walnut hiding in the background and has developed a sweet caramel note. This smoke has really come into its own in the last third and seems to be firing on all cylinders now. The retrohale has earth and mineral notes providing a nice balance to the overall experience. I would suggest taking your time with this cigar as it has a very delicate wrapper and started to crack in a few places. This hasn’t affected the overall smoking experience but a slower pace may help to avoid this issue. ” –Jeff (ExpendableYouth)

“The draw was great. It had just the right amount of resistance and provided copious amount of smoke. ” –Jeff (ExpendableYouth)

“The burn was nice and even. The ash formed a nice chimney but I had to drop it when it developed a split.” –Eric (smalls29)

“The construction was really good up until the end of the second-third but the wrapper started to break apart in the final-third. It has a really delicate wrapper and I may have been smoking a bit quick for this cigar going into the final-third. ” –Jeff (ExpendableYouth)

“After slow start, the flavors took off at the beginning of the second third. There were notes of nuts a woods in the beginning but were not very pronounced. All of a sudden, there they were. The pepper tingle came on then also and made for a nicely, well-balanced cigar. The smoke had a not nice aroma of an oak fire and the after-taste, while a bit bitter, was a nice touch. This was a very enjoyable cigar on a nice, mild, Spring afternoon. It would pair nicely with an ale or rum. Definitely one for the humidor.” –Eric (smalls29)

“I really enjoyed this cigar. I enjoy a cigar that has sweetness but not actually dipped in sugar. The addition of the nut was nice with the overall sweet. When I spoke of the bitterness it was not an unpleasant flavor. It kept the cigar from being one note. Construction was good. I had a slight blemish on the wrapper but that did not effect anything. Draw was close to perfect for me. ” –Matt (Mattehh)

“This was a nice complex cigar with constant flavor transitions. The first-third was so much different than the final-third that it always kept me interested in what was coming next. This stick is worth trying at least once and may be worth picking up a fiver based on your personal preferences. ” –Jeff (ExpendableYouth)

“Overall, massively disappointing, and proved from the start that you can’t always judge a book by it’s cover. It looked beautifully constructed and enticing, but was flavorless and by the halfway point was unsmokable. Here’s hoping I was an outlier on this one!” –Derek (StogieNinja)

Blind Cigar Review: Espinosa | Reggae Robusto Grande
Summary
"I really enjoyed this cigar. I enjoy a cigar that has sweetness but not actually dipped in sugar. The addition of the nut was nice with the overall sweet. When I spoke of the bitterness it was not an unpleasant flavor. It kept the cigar from being one note. Construction was good. I had a slight blemish on the wrapper but that did not effect anything. Draw was close to perfect for me. " -Matt (Mattehh)
Appearance
91
Aroma
93
First Third
93
Second Third
92
Final Third
93
Draw
92
Burn
94
Construction
93
Overall Experience
93
93
Great