At the time these cigars were distributed, we did not know that they were infused. The original press release, which can be found here, made no mention of being infused. Normally when we review an infused cigar, we ask for reviewers that smoke infused cigars and disclose prior to review that the cigar is infused with no other info. This made for an interesting review as the reviewers did not know that it was infused, but all of them clearly identified it. Be sure to read the full notes in the link at the bottom as it make for some interesting notes.

#Famous Toro cigars are mild, flavor-infused cigars with aromas of vanilla, toffee, caramel, and sweet-creamy coffee. You can also use the refillable vacuum-sealed humidor jar to keep your other favorite cigars fresh & safe.

This line has been blended by Nestor Plasencia and rolled in his factory in Nicaragua using a flavorful and semi-spicy Nicaraguan wrapper along with a mild blend of filler tobaccos to mellow the smoking experience out while still maintaining a taste that appeals to mild to full bodied smokers alike.

Cigar Advisor Copywriter and Cigar Reviewer Jonathan Detore said of #Famous ‘This is one of the most revolutionary cigars to hit the market in a long while. The humidification jars these stellar cigars come in are an air tight humidification jar that ensures each shipment of cigars is fresh from Famous shipping the cigars, to the customer receiving the cigars.

“There was a very nice appearance to this cigar. There’s a very soft brown wrapper that has a nice triple cap and clean filler. There were no real large or distinct veins. All in all, just looks really nice.” -Steve (ThaGreatWazoo)

“Instantly, there is a pleasant sugar and mix of floral and citrus aroma. Based on the overall smell, I can immediately tell this wrapper has been infused with something. The cold draw is sweet and leaves a sugary residue on the lips.” -Steve (ThaGreatWazoo) 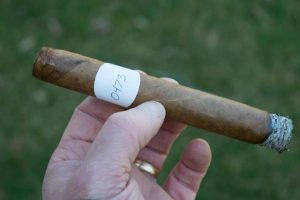 “Despite a distinct chocolate sweetness from the wrapper and cold draw, the cocoa is more of a background flavor. Hay and cedar seem to be the primary notes early on. As the third progresses a creamy quality mixes with the chocolate, intensifying it.” -Gregg (McGreggor57)

“This cigar starts out with a profile very similar to the cold draw which was chilled cappuccino coffee drink; This consisted of coffee, cinnamon, nutmeg, and a generic sugar and cream. Retro is cream, sugar and a light pepper component. I cant remember the last time I smoked an infused cigar, but I believe this to be one.” –Matt C. (Big Matt) 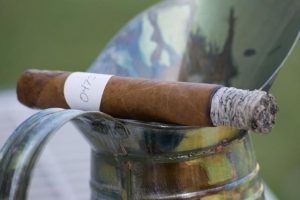 “I’m either getting used to the sweetness or it’s is backing off a little. I am able to taste what I think is mint and chocolate on the draw. The retro-hale is still very sweet and I avoid it since I find it irritating.” -Alan (Eulogy) 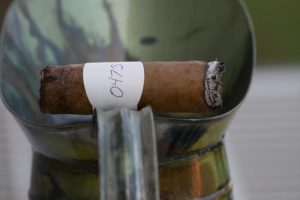 “The final third ends with too much heat and no complexity. The burn and draw were stand outs in the final third and the build was really solid, minus the looseness that caused heating issues. Very poor finish flavorwise.” -Steve (ThaGreatWazoo)

“Coffee, cream, and light spices. Profile remains very much the same as the first two thirds. The retrohale has a pepper zing to it but it doesn’t help the balance or the profile of the cigar.” –Matt C. (Big Matt)

“The draw was pleasant throughout this cigar. A nice straight cut was perfect and allowed an adequate amount of smoke to burn off this thing.” -Steve (ThaGreatWazoo)

“Burned razorsharp and never needed a relight or a touch up. The one shining point I can find in this cigar is it’s excellent smoke output.” -Alan (Eulogy)

“This cigar had a really nice construction and build. The only minus was that it seemed a little loose once it started smoking, which caused overheat issues. But, the build was very good and seemed well made.” -Steve (ThaGreatWazoo)

“Although I enjoy chocolate as a background flavor, I had had enough of it before the end of the first third. The cedar, cocoa and baking spices, mixed with a some grassy notes, failed to achieve a satisfying balance. This ultimately resulted in a harshness during the second half of the smoke. While it may have worked in a smaller vitola as a dessert cigar, as a flavored one, I felt it missed the mark.” -Gregg (McGreggor57)

“This cigar really did nothing for me. The infused wrapper definitely hindered any flavor profiles and smokeability. The build, burn, and draw were very nice aspects of this cigar and could probably create a really excellent smoke with a different wrapper. I am just not a big fan of overly sweet infused cigars.” -Steve (ThaGreatWazoo)

“I personally did not have any problems with this cigar but it never captured my interest or cigar repertoire . The cigar seemed to be infused and the transitions were nil. I would recommend this cigar to the novice or first time cigar smoker as she/he will be able to immediately define flavors even from the cold draw, and those flavors remain consistent and constant throughout the whole cigar experience.” –Matt C. (Big Matt)

“I’ve never had a flavored cigar, but I can’t imagine this not being one. It was too sweet, had a chemical finish that made my stomach churn, and an unnatural flavor profile. I would never choose to smoke a flavored cigar again.” -Alan (Eulogy)