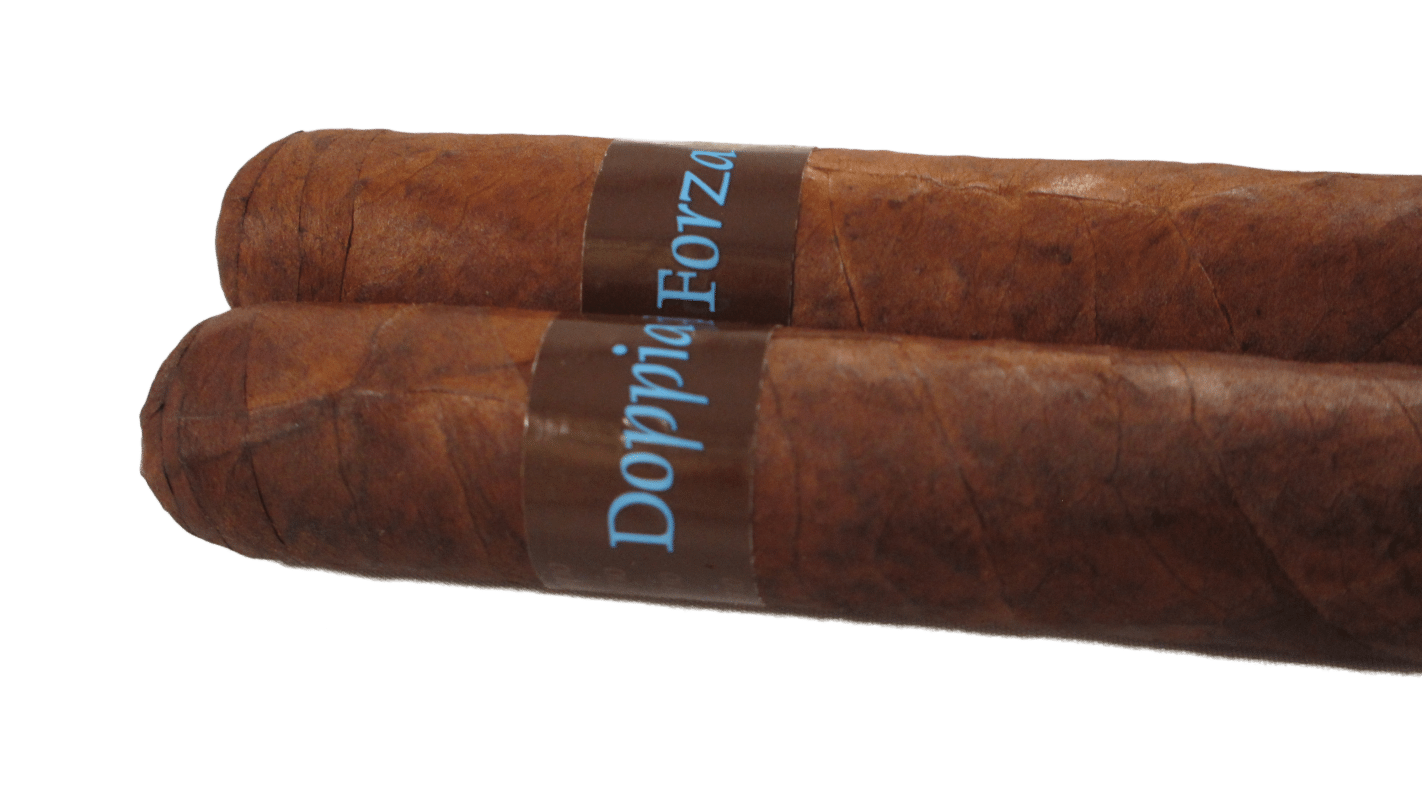 Felipe Gregorio is introducing a line of Big Ring Gauge cigars packed with smooth strength hence the name Doppia Forza. A pendulum effect occurred and now the standard is full bodied. The problem is that many of the cigars available on the market today, top off the blend with ligero which in our opinion gives only strength to the cigar but takes away from the subtleties of the flavor. Doppia Forza uses more sun grown Viso in it’s blend combined with 5 ligeros which adds flavor to the strength giving complexity and roundness to the blend.

“This is a Big stogie! Looks like 6×60. Med/Brown wrapper with darker brown spots throughout. Wrapper feels rough, and is veiny. Cap is round, but not very smooth.” –Robert (NavyPiper)

“Very light aroma consisting of cedar and pepper.” –Will (Dubv23)

“A completely different experience than I was expecting. The cigar opened up very lightly with very subtle flavors. Cedar and a light sweetness on the tongue. The retro hale has the most character with a nice tingling spice.” –Will (Dubv23)

“The first few puffs bring a nice chocolate taste and not much pepper. As with most large rg cigars, I have a tough time getting this lit evenly, and the smoke production is not great. It takes at least 5 puffs to get a decent amount of smoke from it. The flavors are pretty good, still picking up some chocolate with a cedary background now. Towards the end of this third, the flavors are ok still, haven’t changed, but the epic battle I am having with the burn is ruining it for me.” –Emmett (rhetorik)

“The oak and leather flavors lingered with floral flavors appearing. At the end of the second third, the pepper to the back of the throat came back into the forefront. There was a smooth characteristic of the smoke at this point. Evened out the pepper.” –Cindy (Ms_CindyLynn)

“The flavor intensifies a bit from the initial third, but there still just isn’t a lot going on for me. Chocolate, earth, sour/citrus notes and maybe a touch of leather.” –Jason (bigslowrock)

“The smoke was cool but the flavor was bad. This big cigar had a lot of tobacco but lacked in flavor. All I got was a burning cedar that was a result of constant puffing to keep lit and create some flavor. It didn’t work.” –Will (Dubv23)

“The struggle continues with the burn. The chocolate flavor is gone now, and has been replaced by a citrus or sour flavor, not sure if that’s because of the damage done because of all the relights or part of the profile. The main tone is still woody, but not distinguishable as cedar anymore.” –Emmett (rhetorik)

“This third seemed almost identical to the second, except for the cocoa which disappeared. Strength almost identical. Really not much I can add about this thirds flavors.” –Robert (NavyPiper)

“The draw was great, equality between resistance and looseness. Much smoke came from the draw.. thick and visible.” –Cindy (Ms_CindyLynn)

“The burn was sub-par. This was the part that I disliked the most. Ash flakes kept falling throughout the smoke. Very annoying to have to wipe off my pants or shirt. Very loose and required many adjustments.”-Cindy (Ms_CindyLynn)

“Overall, it was a pretty decent smoke. I wouldn’t smoke this on regular rotation.. Maybe if I came across it again. It just wasn’t one of my favorites.. But wouldn’t reject it if it came my way at some point. I think it was the floral notes and burn that threw me off. Two things I don’t look forward to in a cigar.” –Cindy (Ms_CindyLynn)

“I was let down by this cigar. First I had high expectations due to the appearance but was skeptical due to such a large rg. The large size created a nice cool smoke but for something with so much tobacco it generated very little smoke and even less flavor. I’m not sure if my palette was just off tonight but I did not enjoy this one at all.” –Will (Dubv23)

“I honestly think my cigar was sick. It was really flat flavor wise and the burn was a bit crazy. I think if I had a 5er of this in the humidor that I wouldn’t touch another one for at least 6 months.” –Jason (bigslowrock)

“Well, almost a full lighter of butane and two hours later, I can definitely say that if my experience is consistant with the others, I would not recommend this cigar to anyone. It’s entirely possible that mine was a dud and just would not burn right for whatever reason. It’s also possible that I would have had a better experience with a smaller ring guage. This cigar was just too big and didn’t have the combustability of the tobacco to support it. Not an enjoyable experience at all.” –Emmett (rhetorik)

“Overall, I’ve gotta say it was fair. The flavors were ok, but the wrapper came loose in the 2nd third and just continued getting worse, and then add in the burn issues, it just wasn’t a whole lot of fun to smoke due to the constant attention I was having to give it.” –Robert (NavyPiper)

“A larger ring gauge than I usually smoke, but I did enjoy it and would recommend it to anyone that had a couple of hours to smoke a good cigar.” –Ron (shuckins)