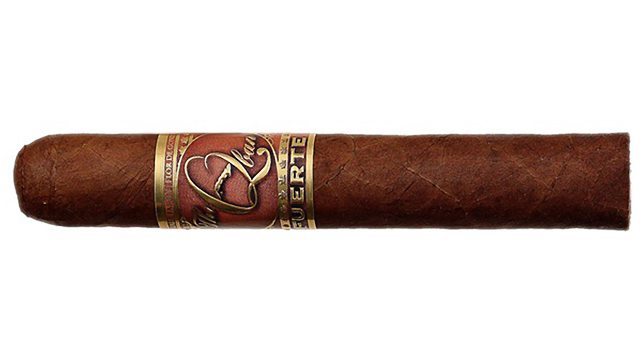 We met with Yadi Gonzalez at IPCPR 2013 and were immediatly impressed with how much she cares about her cigars and their rich history as a cigar company. I have a feeling that you will hear a lot more from these guys in the future. During the past nine years, Arnaldo has been teaching his youngest daughter, Yadi Gonzalez-Vargas the ins and outs of the industry. She is in charge of their factory in Miami which specializes in boutique lines such as their original blend the Gold Series, the Reserva Selecta and their newest edition, the 15 Aniversario. Yadi also oversees their manufacturing in Nicaragua, distribution of the cigars and handles the private label clients. She is literally hands on with the blending and full operation of the business.

From Manufacturer – “The Flor De Gonzalez Q-Ban Fuerte was made with an exquisite blend of aged Nicaraguan Tobaccos perfectly blended to give you a full body smoke that maintains its complexity, full flavor and aroma from beginning to end. It is dressed with an elegant and silky chocolate brown Habano Wrapper that is grown in our plantation in Ecuador. This Cigar is carefully crafted by Cuban craftsmen in our Miami factory and it will surely surpass the expectations of the most demanding full body smoker.

“Remarkable for several reasons. The wrapper leaf fades from medium to dark brown and the spiral wrapping almost resembles a barber pole effect. There are a couple of nicks and tears in the wrapper. There is a layer of fine crystalline dust (plume?) over much of the wrapper. Pretty cool. Rustic but “special” in appearance.” –Brian (B-daddy)

“This cigar has what appears to be plume on it. That’s a good sign on a cigar. Not many noticeable veins and those that are there are visible but smooth to the touch. There’s not much bad I can say about this one. It looks pretty good.” –Milton (mjohnsoniii)

“A mild leather and wood at the foot with a faint pre light draw of cedar. A very nice start to this cigar.” –Gregg (McGreggor57)

“Pretty fair construction. Wrapper is rather veiny, and has some veins/stems under it. Seams are well done. Mostly straight, but has a few small bumps. Firm but does have some give.” –Robert (NavyPiper)

“Initially, pepper on the draw and an odd sour leather flavor. The pepper turns deeply earthy on the finish and lingers for a LONG time. The roof of my mouth and the back of my throat feel it nearly constantly for the first inch or so of the smoke. It takes on a rich smoky wood flavor toward the end of this third. Nice.” –Brian (B-daddy)

“A bit of pepper on the first couple of retrohale’s and then it was gone. The initial flavors are darker ones. Cocoa, coffee and leather. The flavors seem to coat the tongue and linger on the palate. I’m impressed with the smoke production right off the bat. Half way into this third the flavors are turing into deeper versions of their former selves. Dark roasted coffee beans and semi sweet chocolate. Very nice.” –Gregg (McGreggor57)

“At almost the exact same moment that I was amazed at the thick and creamy smoke that billowed from the initial draw, I was also greeted by the swift kick of red pepper and cedar. Nice! This cigar is relatively strong as it has a slight numbing effect upon each draw. There are notes of espresso as well as hints of a very dark, unsweetened chocolate and freshly cut grass. All these flavors tend to come and go but are very dominant when present.” –Milton (mjohnsoniii)

“Drop off in intensity as I start the second third. The flavors are similar to the first third but softer, more blended. Still getting pepper on the finish but the draw is primarily the toasted wood flavor. But the toasted wood is a little different too. It’s turned rich and creamy in this third. Unfortunately, at the end of this third, I’m starting to get a tar/resin residue on my lips. Very bitter.” –Brian (B-daddy)

“There is a very familiar sweetness on the retrohale. Can’t quite put my finger on it. The smoke continues to billow and is thick as ever. The espresso tasted earlier is still prominent with the addition of a mild chocolate and some type of dried fruit. The ash held on into this third which further confirmed my belief that this one was constructed rather well. I really enjoyed the first and second thirds.” –Milton (mjohnsoniii)

“This was a very good cigar that I enjoyed very much. The coffee notes, woody flavors and sweetness all combined for a pretty memorable experience. The sweetness I tasted earlier on the retrohale was reminiscent of a mesquite-type flavor and continued throughout the last third of this cigar.” –Milton (mjohnsoniii)

“The bitter coffee and cocoa appear to have dropped off this third, leaving just the walnuts and tobacco. This has been a surprising flavor, never had walnuts as a flavor before, and has been a pleasant change.” –Robert (NavyPiper)

“I didn’t have a single issue with the draw. It had the perfect resistance and enabled me to taste every nuance it had to offer.” –Milton (mjohnsoniii)

“The burn was very good, pretty straight and even the whole time, never had to touch up.” –Robert (NavyPiper)

“I liked this cigar. Good strong flavors and very good performance. I’d smoke this again if the price is right. If the one I smoked is representative of the line, I’d be willing to make this a regular smoke.” –Brian (B-daddy)

“This cigar didn’t make you chase flavors and could be considered somewhat one dimensional. But if you like that dimension, and I did, then it was a very solid smoke!” –Gregg (McGreggor57)

“Hopefully I didn’t just get the “good one” of the bunch. This cigar was very good from initial light until the end. I can’t wait to see what it is as I will definitely be looking for more to add to the stash. It was complex and offered a multitude of flavors which I’m sure will only get better with a decent amount of age.” –Milton (mjohnsoniii)

“Overall, it was an interesting cigar. The flavor of walnuts was a first for me and it was pretty good, reminded me of fall, so that was nice. Nothing really earthshaking, it was a basic pretty good cigar, not sure if it’s one I’d be on the look out for to acquire more of, but wouldn’t turn it down either.” –Robert (NavyPiper)